CHICAGO -- It took 41 years for a black head coach to make
it all the way to the Super Bowl.

Lovie Smith did it Sunday on a snowy afternoon in Chicago. Four
hours later, his good pal and mentor Tony Dungy joined him. Not
one, but two black coaches meeting in the nation's biggest sporting
spectacle. 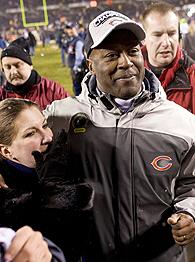 It's historic. And it's about time.

Change has come appallingly slow. But now two of the most
decent, deserving men have pushed the NFL forward.

And that is a very good thing.

And Smith equally so of Dungy.

"We have to play someone and, in my perfect world, I would like
to see the Colts be that team," Smith said after his Chicago Bears
pummeled the New Orleans Saints 39-14.

"Tony Dungy has done an awful lot for our game," Smith said.
"He hasn't had a chance to coach in the Super Bowl. I would love
to see it."

It wasn't all that long ago that the NFL's best jobs were
off-limits to blacks. Never mind that three-quarters of the
league's rosters were filled with black players. Or that there were
qualified black assistants. When the time came to hire a new coach,
they were passed over, time and again.