Rex Grossman hasn't even played in the big game and there's already talk he may be the worst Super Bowl starting quarterback. We'll let that play out before we brand him the worst. In the meantime, here are the 10 worst performances by Super Bowl quarterbacks: 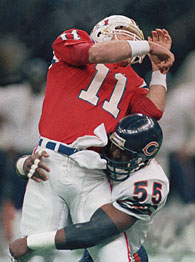 1. Tony Eason: After helping the Pats become the first team in NFL history to win three games on the road to reach the Super Bowl, Eason had the unenviable task of facing Chicago's "46" defense. He didn't last long in Super Bowl XX, getting knocked out of the game in the first quarter after being sacked by Richard Dent and Wilber Marshall. He achieved an ignominious honor, becoming the only starting quarterback in Super Bowl history not to complete a pass, going 0-for-6.

2. Fran Tarkenton: He undoubtedly is one of the top quarterbacks in the history of the game, but you wouldn't know it by his Super Bowl appearances (VIII, IX and XI). The Vikings' quarterback was on the losing end each time and tossed just one touchdown compared to six interceptions. In Super IX against the Steelers, he was 11-for-26 for 102 yards with no touchdowns and three interceptions.

3. Craig Morton: Tom Landry didn't make many bad decisions during in his great career, but one he may have wanted to grab back was starting Morton over Roger Staubach in Super Bowl V against the Colts. Morton, who alternated with Staubach during the season, completed just 12 of 26 passes for 127 yards and threw three interceptions as Dallas lost 20-16. He had his shot at redemption in Super Bowl XII when he returned to the big game as Denver's starting quarterback to face, ironically, Staubach and the Cowboys. Morton was awful in that game, completing four of 15 passes for 39 yards and four interceptions.

4. Earl Morrall: While Super Bowl III is most remembered for Joe Namath's bold prediction, it was Morrall who pretty much guaranteed the Jets would upset the Colts. The NFL's MVP in 1968 was 6-for-17 for 71 yards and no touchdowns and three interceptions before being benched by Colts coach Don Shula in the second half. Morrall did achieve a certain level of redemption two years later, replacing an injured Johnny Unitas early in Super Bowl V and leading the Colts to a victory over the Cowboys.

5. Jim Kelly: He stands alone as the only quarterback to lose four Super Bowls (XXV, XXVI, XXVII and XXVIII). In his four Super Bowl appearances with Buffalo, he completed 81 of 145 passes for 829 yards, with two touchdowns compared to seven interceptions. He was intercepted four times against the Redskins in Super Bowl XXVI (tied for the second most all-time), and was knocked out midway through the second quarter against the Cowboys in Super Bowl XXVII, having already thrown two interceptions and fumbling once.

6. Kerry Collins: He resurrected his career in New York, leading the Giants to their first Super Bowl appearance in a decade (XXXV). Unfortunately, his lone trip to the big game was a night he would just as soon forget, as Baltimore's tenacious defense forced him into one of the worst performances in Super Bowl history. Collins was 15-for-39 for 112 yards, no touchdowns and four interceptions as the Ravens crushed the Giants 34-7.

7. Billy Kilmer: The Dolphins cemented a perfect season in Super Bowl VII thanks in large part to a decidedly imperfect performance from Kilmer, who completed 14 of 28 passes for 104 yards, no touchdowns and three interceptions. Washington's only touchdown came courtesy of Garo Yepremian's misplayed field-goal attempt, returned 49 yards by Mike Bass for the score.

8. Rich Gannon: He enjoyed a rebirth in Oakland under Jon Gruden. Unfortunately, by the time the veteran quarterback made his first and only appearance in the big game (XXXVII), Gruden was on the opposite sideline. Gannon became the first quarterback to toss five interceptions in the Super Bowl, three of which were returned for touchdowns, in the Bucs' 48-21 victory.

9. Boomer Esiason: He was the league's MVP in 1988, but came up very small in his only Super Bowl appearance. Esiason was 11-for-25 for 144 yards, no touchdowns and one interception. Cincinnati's offense managed 229 total yards and failed to find the end zone -- the Bengals' only touchdown came on Stanford Jennings' kickoff return -- in a 20-16 loss to San Francisco.

10. Ben Roethlisberger: Big Ben capped a remarkable second year by becoming the youngest quarterback to win a Super Bowl (23 years old). The Steelers' QB did so, however, by turning in the worst performance by a winning quarterback. Roethlisberger was 9-for-21 for 123 yards. Seattle's Kelly Herndon returned a horrid Roethlisberger pass 76 yards.