MIAMI -- Roger Goodell has a strong message for NFL players:
Stay out of trouble.

Plagued by tragedy and numerous arrests, the NFL's image took a
hit this season, though the commissioner doesn't believe it's out
of control or irreversible. 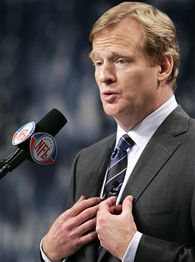 "We have to educate our players to the issues out there," he
said in his first Super Bowl news conference. "We are raised to a
higher standard in the NFL. We must make sure the players are more
accountable and our clubs are more accountable.

"One incident is too many in my book. I think we need to
re-evaluate all of our programs. We have a tremendous number of
programs that I think have been quite successful to help our
players. But I think we've got to do more."

That includes meeting with NFL players' union chief Gene Upshaw
and a group of players who can "give us their perspective on
what's really happening and what are the issues, so we can try to
learn something first."

During the past few months, nine Cincinnati Bengals players have
been arrested. Broncos cornerback Darrent Williams was shot to
death on New Year's Day outside a nightclub.

"I don't see it happening in droves. I think it's just a few,
but that's a few too many," said Goodell, who replaced Paul
Tagliabue as commissioner in September. "We recognize some players
don't do what we would hope they do and when that happens, we will
be very aggressive in dealing with that."

Though the league's black eye this season was the main topic
Friday, he also talked about concussions, insisting a player's
health takes precedence over football issues.

Responding to reports that former Patriots linebacker Ted Johnson was forced to practice with a concussion, Goodell praised
team trainers and league doctors who deal with concussions and
said, "I certainly hope that our coaches always are looking out
for the medical well-being of the players. I think they encourage
that and they want that."

He said he needed more information on the Patriots' situation
before commenting directly about it.

"I don't see a conflict of interest with our trainers. I think
they are out there for the welfare of the players," Goodell said.

He applauded the players for taking an active role in trying to
eliminate use of illegal substances. Goodell also said not allowing
players who are suspended under the drug policy to win postseason
awards is "a huge priority for us."

San Diego linebacker Shawn Merriman made the All-Pro team, will
play in the Pro Bowl and was considered a front-runner for
defensive player of the year despite sitting out four games for
violating the substance policy. Several players, including Miami
end Jason Taylor, who was voted the top defensive player,
criticized Merriman receiving such honors.

"Our players are the ones who stood up and said they don't want
this in our game and that somebody who violates this doesn't
deserve a Pro Bowl spot," Goodell said.

He cited the hiring of Mike Tomlin as coach of the Steelers and
the presence of Tony Dungy and Lovie Smith as head coaches in the
Super Bowl as further proof the "Rooney Rule" on minority hirings
is working. Steelers owner Dan Rooney wrote the rule that requires
teams to interview minority candidates for off-field jobs.

"I hope someday it's not going to be necessary," Goodell said,
referring to the policy. "The clubs are doing it voluntarily
because they believe it's paying dividends for them and they're
benefiting. And, most importantly, it's the right thing to do."

On other issues, Goodell:

• Expressed confidence that the league and union will continue
to have labor peace; the collective bargaining agreement runs
through 2010. Owners have an option of voiding the CBA in 2008 to
possibly restructure the way they and the union do business in the
salary-cap era.

• Said the league is conducting its own investigation of urine
or blood testing for human growth hormone.

• Addressed complaints from retired players about their
pensions, saying "we're very concerned to see one of our former
players who made this game great have medical issues. We have to
sit down and be creative. We need to address that directly with
them."

• Reiterated the league's opposition to gambling and "keeping a
strong line between the NFL and sports betting. I don't think it is
in the best interest of the NFL to have any association with sports
betting."