After a rain-soaked victory in Miami the night before and then a
frigid, bone-numbing homecoming parade through the streets of
downtown Indianapolis on Monday night, the Colts finally arrived at
the stadium for a raucous celebration with their fans.

More than 40,000 of them, just as loud and boisterous as they
were when the Colts left the Dome two weeks earlier with the AFC
championship, welcomed them home, reveling in the city's first
major professional sports championship in more than 30 years. 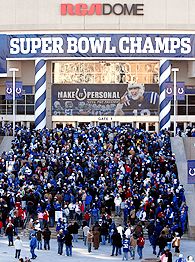 "It sure feels good to be back in this Dome after playing in
that weather last night," shouted Peyton Manning, the MVP in the
Colts' 29-17 victory over the Chicago Bears. "On behalf of the
players, we want to thank the greatest fans in the world."

Most of the fans had been there for hours, patiently waiting for
the team to arrive. The parade was supposed to begin around 4 p.m.
but got under way late because the Colts' plane from Miami was
delayed. No matter.

"It might be a once-in-a-lifetime thing," Robert Smith of
Indianapolis said while watching a giant-screen TV replay of Sunday
night's victory over the Bears.

Many of the fans were wearing Colts blue. Many held signs such
as "We love our Colts" or just a simple "Thank You."

Once the team arrived, still wearing their parkas or hooded
sweat shirts from the below-zero wind chill outside, it was the
Colts themselves who delivered all the thank yous.

"You guys are awesome," coach Tony Dungy told the crowd. "For
the last 16 or 18 hours, we've been enjoying this championship. We
had a team party [in Miami] last night, but we were looking forward
to coming home. This is more than we could have ever expected.
Thank you for this turnout."

Two giant inflatable balloons resembling Colts players flanked a
stage that was set up on the floor of the Dome. Amid a barrage of
camera flashes from the stands, many of the Colts players -- and
Dungy, too -- brought out their own cameras to record the moment.

"Wow," Colts owner Jim Irsay said. "This is just
unbelievable. I couldn't be more excited. ... You guys are what
makes it go. I love you, and Go Colts!"

Colts president Bill Polian called the fans "the voice that
propels us. ... Thank you for your support. Thank you for what you
do for us. Be proud. You're the world champions."

Most of the fans had waited inside the Dome, although hundreds
went back out onto the streets as the parade approached. Many of
them shared triumphant shouts and high-fives with the players who
were riding atop the slow-moving trucks and floats.

Some of them had braved the single-digit temperatures for hours.

"We want to see the Colts go by," said Misty Bell of nearby
Monrovia. "It's worth it."

Eric Dycus of Indianapolis, one of the fans who waited inside,
called it "exciting times" for the franchise.

"The Indianapolis Colts waited for this for a long time. We
went through the hard times and all of the muck and mire. This is
worth celebrating," Dycus said.

The Colts also won the Super Bowl in 1971, when the team was
based in Baltimore, but Sunday's victory over Chicago gave the city
its first major pro title in any sport since the Indiana Pacers won
their third ABA championship in 1973.

"I spent a lot of cold days in here before the roof was on.
This is great," Fairchild said.

The Colts will play one more year in the Dome before moving into
the new Lucas Oil Stadium, which is expected to be completed in
time for the 2008 season.

"I know at times I wondered if it would happen in this building
when they started building a new stadium," Fairchild said. "It's
highly likely they can pull it off again."