New England's Tom Brady has been so dominant that he got us thinking about his place in history. We already know he's enjoyed one of the best years ever for an NFL quarterback. But now it's time to ponder how his performance stacks up against all the greatest accomplishments in the history of the league. By the way, this is what we do when we're graced with such brilliance. We feel compelled to investigate its significance from every possible angle.

After all, how do we determine the best individual years ever in the NFL? Some people think it all comes down to the players who possess the best numbers. Others view context as being more critical, especially when some players -- like O.J. Simpson and Jerry Rice -- set records that have been surpassed by players who've played in more games than they did. And finally there are the short-sighted types who get so caught up in offensive fireworks that they forget to even mention players on defense (fortunately we didn't make that mistake).

So here's what we think about the matter of who enjoyed the greatest seasons since the AFL-NFL merger in 1970
. We're sure you'll have your own opinions:

1. Dan Marino, Miami, 1984: Marino used his second NFL season to terrorize opposing defenses on a weekly basis. Blessed with a quick release and a rocket right arm, he produced a season-long performance that required its own section in the league record books once he was done. Marino set NFL marks for yards (he became the first player to pass for 5,000 yards in a season with 5,084) and touchdown passes (he blew away the old mark of 36 with 48 of his own) and he led the Dolphins to a spot in that year's Super Bowl. Marino's Hall of Fame career included many great seasons but nothing ever came close to those feats.

In fact, there is one chief reason his performance still ranks better than those produced more recently by Indianapolis' Peyton Manning and New England's Tom Brady:
The application of the rules was different. Both Manning and Brady benefited from the league's decision in March 2004 to place a greater emphasis on enforcing the illegal contact rule, which penalizes defenders who touched receivers more than five yards away from the line of scrimmage. If Marino had that advantage going for him, nobody would've ever matched the season he produced 24 years ago. 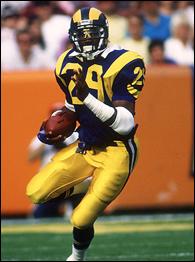 2. Eric Dickerson, Los Angeles Rams, 1984: All you have to know about Dickerson's record-breaking season -- he gained 2,105 rushing yards that year -- is that the Rams didn't have much of a passing game. Their offense hinged primarily on Dickerson's running right, Dickerson's running left and Dickerson's running just about everywhere else in between. That he generated that much yardage is a testament to the men who blocked for him and the remarkable skills he was blessed with. The man was one of the best pure runners the NFL has ever seen.

Some skeptics complain that Dickerson needed 15 games to reach the 2,000-yard mark -- while O.J. Simpson did it in just 14 games back in 1973 -- but Dickerson was both spectacular and steady. As proof, just consider that Dickerson set a record that year by eclipsing the 100-yard mark 12 times that season. You don't do that by getting extra touches. And you don't hold that record for rushing yardage as long as Dickerson has without doing something truly special.

3. Peyton Manning, Indianapolis, 2004: No quarterback in NFL history has ever been as efficient over a full season as Manning was during this campaign. Yes, he gained most of his notoriety by throwing an NFL-record 49 touchdown passes. But another league mark that Manning snapped that season --- his passer rating of 121.1 eclipsed the record set by former 49ers quarterback Steve Young -- was just as remarkable. It basically meant that Manning didn't have a performance that was less than excellent all season.

Manning was so hot that he set league records by throwing at least four touchdown passes in five straight games and producing six overall games with at least four scoring tosses. However, the really scary part is what he could have done with more action. Because the Colts sat him in the fourth quarters of at least five blowout wins and for nearly all of a meaningless, season-ending finale against Arizona, Manning attempted 497 passes (compared to 578 for New England's Tom Brady this season). With a few more opportunities, Manning would've set records that would never be touched.

4. Tom Brady, New England, 2007: Most people expected Brady to be his usually reliable self when the Patriots added wide receivers Randy Moss, Wes Welker and Donte Stallworth to their roster last offseason. But few could've predicted the assault that he'd make on the NFL record book once the regular season began. It wasn't just that Brady made history with his 50 touchdown passes and his streak of 10 consecutive games with at least three scoring tosses. The man's focus never waned as the Patriots stormed to a perfect regular season.

Along with the touchdown passes, Brady set a career-low for interceptions (eight) and he also led the NFL in passing yards (4,806) and passer rating (117.2). Combine those numbers with the fact that New England became the first team to go 16-0 during the regular season and you get a year that will never be forgotten. Brady was easily the best big-game quarterback of his generation before this season arrived. Now that it's nearly over, he's given us ample reason to believe he might be the NFL's best signal-caller ever by the time he's finished.

5. LaDainian Tomlinson, San Diego, 2006: The NFL has seen other backs go on crazy scoring streaks in recent memory -- specifically, Dallas' Emmitt Smith and Seattle's Shaun Alexander. They never achieved like Tomlinson did last season. He set league marks for rushing touchdowns (28), total touchdowns (31) and points (186) in one season. He also threw a pair of touchdown passes.

Overall, Tomlinson set 13 league records during his remarkable year but that isn't even the amazing part. What is truly jaw-dropping is how dominant Tomlinson became in the second half of that year.

In retrospect, Tomlinson actually scored 23 of his touchdowns in just eight contests. He scored only eight times in his first six games of that year and he didn't produce a touchdown in his final two contests. By the way, Tomlinson also led the league in rushing (1,815 yards) while compiling 2,323 total yards. That last number ranks as the sixth-highest total in league history.

6. Jerry Rice, San Francisco, 1987: Rice is another player on this list who has enjoyed so many phenomenal campaigns that it's hard to pin down one season among others. But 1987 stands out for one reason: his production in an abbreviated amount of time. Even with a players' strike limiting Rice to 12 games, he still managed to produce an NFL-record 22 touchdown receptions. He also scored 23 touchdowns overall, a total that was one shy of tying the single-season record John Riggins held at the time.

Of course, some people might argue that Rice had years when his numbers were more prolific in other areas -- for example, he caught 122 passes for a league-record 1,848 yards and 15 touchdowns in 1995 -- but there are plenty of receivers who have tons of receptions and yards. The really special ones get into the end zone. And since it took New England's Randy Moss all of 16 games to break Rice's record, we'll say the old man belongs on this list. By the way, Rice also won the league's Most Valuable Player award that year.

7. Lawrence Taylor, New York Giants, 1986: Taylor enjoyed several great seasons in New York but nothing he did in that town compared to what happened in this year. He produced a career-high 20.5 sacks, for one thing. He also added 105 tackles, five pass deflections and two forced fumbles. The man was so brilliant that it wasn't merely enough to name him Defensive Player of the Year. He also became the first defender to win NFL Most Valuable Player honors since Minnesota's Alan Page did it in 1971.

Taylor's dominance didn't end with the regular season, either. He helped lead the Giants through the playoffs -- they outscored their NFC opponents, San Francisco and Washington, 66-3 -- and on to a 39-20 win over Denver in that season's Super Bowl.

8. O.J. Simpson, Buffalo, 1973: It would be easy to say that Baltimore's Jamal Lewis or Detroit's Barry Sanders belongs on this list -- Lewis gained 2,066 yards in 2003 while Sanders amassed 2,053 yards in 1997 -- but Simpson deserves credit for this ground-breaking campaign. When Simpson gained 2,003 rushing yards in 1973, it was one of the most amazing moments in sports. He was the first running back to ever hit the 2,000-yard mark and none of the four players who've accomplished that feat since has done it in 14 games. In fact, it's still a safe bet that no other runner will be that productive in as short a time span.

Simpson's season is all the more impressive because of how it ended. He actually had 1,584 yards going into the final two weeks of that season but his offensive line cleared enough room for him to reach the record books. He gained 219 yards against New England before churning out another 200 against the New York Jets in the finale. That effort alone should tell us how extraordinary Simpson was.

9. Lester Hayes, Oakland, 1980: No cornerback has ever dominated the NFL as Hayes did during this year. True, he had a lot of help from a substance known as Stickum but the numbers still blow you away. The man intercepted 13 passes and generated 273 return yards on his way to winning the league's Defensive Player of the Year award. It's an understatement to say that teams feared throwing the ball in Hayes' direction as that year played out. After a certain point, the very notion bordered on sheer stupidity.

To understand how good Hayes was, just think about what he did once the Raiders made the postseason. He intercepted five more passes in the playoffs. He returned two of those picks for touchdowns. And though he didn't intercept a pass in the Raiders' 27-10 win over Philadelphia in that season's Super Bowl, he still allowed only two receptions to the receivers he covered. That's about as good as it gets.

10. Reggie White, Philadelphia, 1987: White's name isn't in the record books for most sacks in a single season -- that mark currently belongs to the New York Giants' Michael Strahan -- but he clearly would have that record if this had been a normal year. Thanks to the same players' strike that affected Rice, White appeared in only 12 games that season. That happened to be just enough time for him to record 21 sacks, which is an astonishing number when considering Strahan's total of 22½ came over a full 16 games. But that's how good White was in his prime. Even unfortunate circumstances couldn't hold him back.

Looking back, White's season was destined for greatness from the moment it began. In the season opener, he sacked Washington Redskins quarterback Doug Williams, forced a fumble and returned the ball 70 yards for a touchdown. After that, every other quarterback in the league should have been on notice. White clearly was going to be unstoppable that year.