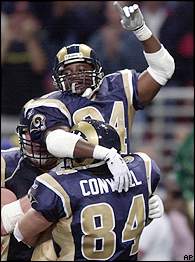 Faulk, who didn't fumble all last season, coughed up the ball
twice Sunday before leaving with a strained right knee that will
sideline him for up to a month.

The Rams beat the New York Giants 15-14, anyway. Backup Trung Canidate scored on a 1-yard run with 4:16 left and the Giants'
potential game-winning drive ended when a pass to Joe Jurevicius
popped out of his hands on a hit and into the arms of Grant Wistrom
at the St. Louis 27-yard line.

Faulk had a total of 63 yards, a season low.

"I took a couple of shots and just didn't take care of the ball
well," he said.

Besides Faulk's woes, the Rams didn't get a touchdown pass and
Kurt Warner was sacked six times, four by Michael Strahan.

Can Trung Canidate adequately replace Marshall Faulk is he's out for
awhile?
Canidate certainly can't do all the things Marshall can do -- especially in
the passing game.

Canidate isn't a make-you-miss runner like Faulk. He's more of straight-line
speed guy; he can hit a crease and go the distance.

Can Canidate replace Faulk adequately? Probably adequately. But Canidate
can't make the same plays and create the same mismatches in the passing
game. Defenses can play the Rams differently without Faulk in the game.

ESPN.com NFL analyst Vinny Cerrato has served as director of player
personnel for the Redskins and 49ers.

"It's tough to accept this," said Strahan, who has 8½ sacks in
the last three games. "I definitely felt we deserved better than
we got."

The Rams (5-0) were held to three field goals by Jeff Wilkins
before the fourth quarter, when Sam Garnes was called for
interference on Canidate in the end zone to give St. Louis a first
down at the 1.

"Any call like that is a good call," Canidate said. "He kind
of tugged on me a little bit."

Referee Gerry Austin said Garnes "had him by the shirt, took a
step away from him."

Giants coach Jim Fassel didn't agree with the call and
complained vociferously. He didn't want to talk about it after the
game, however.

"That's enough," Fassel snapped the second time the subject
came up. "One more question about the officials and I'm done."

Canidate, who entered the game with only nine carries as the
backup to Faulk, the NFL's MVP last year, scored his touchdown on
the play after the interference call. The 2-point conversion
attempt failed.

The Giants were driving for a possible game-winning field goal
before Wistrom's fumble recovery with 1:04 to go sealed the
victory. Adam Archuleta hit Jurevicius just as the ball arrived at
the St. Louis 27, popping the ball into the air for Wistrom.

"We always stress if you hustle to the football good things
will happen, and that's all that play was," Wistrom said. "I
happened to be at the right place at the right time."

The Giants also were hurt by an unsportsmanlike conduct call on
Ron Dayne for shoving the ball in the face of Brian Young in the
fourth quarter, a call that pushed them out of field-goal position.

"Someone jumped over the pile and hit me late, so I hit him
with the ball," Dayne said. "They were doing it all game."

The Rams won their previous two games by a combined score of
77-10 and were coming off a 35-0 shutout of Detroit on Monday.
Warner was 28-of-46 for 316 yards and an interception.

Dayne, who missed the second half of the Giants' victory over
the Redskins last week, scored on a 4-yard run on New York's first
drive and had 88 yards on 20 carries. Kerry Collins and Ike Hilliard hooked up on a 25-yard touchdown pass with 13:33 remaining
to put the Giants ahead 14-9.

Faulk has three fumbles in his last two games. The last one gave
the Giants the ball at the St. Louis 34 with 33 seconds to go in
the third quarter, setting up Hilliard's touchdown.

He was injured on helmet-to-helmet hit by Shaun Williams, and
spent much of the rest of the game sitting on a medical table with
a towel over his head.

Strahan beat up on Rams right tackle Ryan Tucker, who broke his
right hand and separated his left shoulder last week. Tucker was
finally replaced by Rod Jones, making his first appearance of the
season, in the fourth quarter.

"Obviously, I was causing some problems," Tucker said. "It
didn't go so well."

Game notes
Faulk's yardage total was his worst in the regular season
since he totaled 43 yards against the Saints Nov. 26, 2000, against
the Saints. Faulk passed O.J. Simpson for 16th place on the career
rushing-receiving list. He has 13,420 yards. ... The Giants won the
coin toss for the first time all season. ... Warner has 21 300-yard
passing games, breaking the team record he shared with Jim Everett.