MINNEAPOLIS (AP) -- The Minnesota Vikings had nothing to lose. So
why not let Randy Moss throw the ball, and send a 43-year-old
kicker out for his longest field-goal attempt in four years? 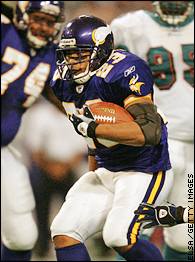 Moss threw a 13-yard touchdown pass to give Minnesota the lead
early in the fourth quarter, and Gary Anderson's 53-yard kick with
17 seconds left gave the Vikings a 20-17 victory over the Miami
Dolphins on Saturday.

Even though Anderson hadn't tried a field goal as long as 53
yards since that game against the Jaguars, the NFL's all-time
leading scorer was confident.

The defeat prevented the Dolphins (9-6) from clinching a playoff
spot. They lead New England by a half-game in the AFC East and can
win the division by beating the Patriots in Foxboro, Mass., next
week. A loss could leave them out of the playoffs.

"Life is simple for the next seven days,'' said defensive end
Jason Taylor, who had 1½ of his league-leading 18½ sacks. "Win, or
we're home for New Year's.''

Moss, named to his fourth Pro Bowl this year after being left
off last season, had seven receptions for 110 yards. He has 100
catches this season, 18 more than the career high he set last year.

The Vikings (5-10) continued taking risks, six days after Daunte
Culpepper ran for a 2-point conversion with 10 seconds left in a
32-31 victory at New Orleans. A kick would've sent the game to
overtime.

Culpepper kept the pivotal drive going Sunday by running 3 yards
on fourth-and-2 at the Miami 45. Minnesota coach Mike Tice sent the
punt team out, but he called timeout and changed his mind as
Vikings fans urged them to go for it.

"I heard them,'' Tice said. "What the heck. They deserve some
fun. They've been through a long season.''

The Vikings reached the 35, and Anderson made the line-drive
kick. It curled right, grazed the right upright and sneaked over
the crossbar.

"Everyone said he didn't have the leg,'' center Matt Birk said.
"But he showed he had it, boy.''

Three plays after he caught a 60-yard pass from Daunte
Culpepper, Moss took the handoff, juked safety Shawn Wooden and
threw the TD pass to D'Wayne Bates, giving the Vikings a 17-14 lead
with 11:53 remaining.

Bates was covered, so Moss intentionally threw the ball behind
him.

Culpepper was 20-for-29 for 244 yards and two interceptions.

Cris Carter's return to the Metrodome was a dud until he caught
a wide-open 15-yard pass -- his only reception of the game -- on
third-and-6 midway through the fourth quarter.

Fiedler's pass on third-and-7 glanced off Carter's hands at the
goal line, and the Dolphins had to settle for Olindo Mare's 25-yard
field goal that tied it at 17 with 6:09 left.

Carter retired last year after 12 seasons with Minnesota, and he
joined Miami in November. As the Dolphins' third-down receiver, he
was only on the field for a handful of plays.

Four first-half trips by Minnesota to Miami's 30-yard line or
further yielded only three points, because of three turnovers. But
the Vikings ate up half the third quarter with a 78-yard drive that
Moe Williams capped with a 3-yard touchdown run to give them a 10-7
lead.

Culpepper's turnovers have crippled the Vikings' offense many
times this year, but he's been far better over the last month, and
he even earned the NFC's offensive player of the week award after
his game against the Saints.

For most of the first half, though, Culpepper reverted to
earlier form against the NFL's second-ranked defense and its five
Pro Bowlers. He threw two interceptions and fumbled three times,
losing the second one at the Dolphins 30 midway through the second
quarter.

Miami touched the ball first on Culpepper's two other fumbles,
but the Vikings recovered those.

"Guys were straining their guts to get it done,'' Wannstedt
said, "and we just didn't come up with the football.''

Game notes
Miami's Ricky Williams had 43 of his 67 yards in the first
quarter, ending a streak of five straight 100-yard games. ... Moss
also threw a TD pass against the New York Giants on Dec. 26, 1999.
... Chris Chambers caught a 59-yard touchdown pass from Fiedler in
the first quarter. ... Carter and Moss hugged on the field before
the game.