TAMPA, Fla. (AP) -- The sharpest young quarterback on the field
was Chris Simms, not Carson Palmer.

Simms, the second-year pro competing with Brian Griese for Tampa
Bay's No. 2 job, completed 12 of 15 passes for 110 yards to help
the Buccaneers to a 20-6 victory over the Cincinnati Bengals on
Monday night. 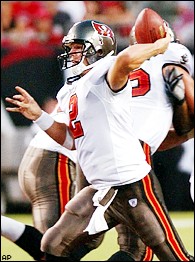 "It was great to get out there and play someone else besides
our defense. I had a lot of fun and definitely got some good
experience."

Palmer, the first pick in the 2003 draft, made his first start
since college for the Bengals. The Heisman Trophy winner threw an
interception on the game's opening possession and left the game
after leading his team to a field goal on the other series he
worked.

Jon Kitna replaced him and was 7-of-15 for 58 yards. The Bengals
wasted an opportunity to score a touchdown when Kitna lofted a
perfectly thrown ball to a wide-open T.J. Houshmandzadeh, but the
receiver failed to get either foot down in the end zone.

"Our mistakes pretty much told the story," Bengals coach
Marvin Lewis said, noting that his team also hurt itself with
dropped passes and turnovers.

The coach, however, thought Palmer managed the offense well.

Palmer gave himself a favorable review.

"I'm not happy with the outcome, but we did some good things
along with the mistakes," Palmer said. "I felt weird, but I felt
great. It's just been so long since I played in an actual game."

Chris Perry, Cincinnati's first-round pick this year, also got
off to a shaky start. The running back fumbled on his first carry,
setting up the first of two TDs that Earnest Graham scored for
Tampa Bay.

The preseason opener was delayed two days because of Hurricane
Charley, which slammed ashore on Florida's Gulf Coast before
heading up the middle of the state over Orlando, where both teams
were waiting out the storm last Friday.

The Bucs, Miami Dolphins and Jacksonville Jaguars have set up
collection programs to aid relief efforts throughout the state, and
All-Pro linebacker Derrick Brooks and five other players signed
autographs for fans making donations outside Raymond James Stadium.

"I've seen quite a few hurricanes in my lifetime," Brooks
said. "Obviously the pictures tell a thousand words, but to see it
in person tells even more. Your heart goes out."

Perry, the 26th pick in this year's draft, missed the first 11
days of training camp before ending his contract holdout last week.
The extra days of practice the Bengals got because of the storm
gave the rookie additional time to prepare for his debut.

The former Michigan star fumbled after gaining 1 yard to his own
19 on his first carry. Tampa Bay's DeVone Claybrooks recovered,
setting up Earnest Graham's TD that made it 13-3.

The Bengals challenged the ruling that Perry fumbled, arguing
that he was down by contact before the ball popped out.

Brad Johnson started at quarterback for Tampa Bay and completed
all three of his passes on the only series he worked, moving the
Bucs from their 37 to the Cincinnati 2 before settling for
Gramatica's 20-yard field goal.

Griese replaced Simms, a third-round draft pick in 2003, midway
through the third quarter.

The former Denver starter was 7-of-11 for 96 yards and directed
the fourth-quarter drive that produced Earnest Graham's second
touchdown.

Game notes
Brooks sat out with a sprained knee. ... WRs Tim Brown and
Joey Galloway started and played one snap in their Tampa Bay
debuts. Galloway was acquired in the trade that sent Keyshawn
Johnson to Dallas and Brown signed last week after playing 16
seasons in Oakland. ... Bucs RB Charlie Garner sat out with a sore
hamstring. ... Cincinnati WR Chad Johnson played sparingly and had
two receptions for 32 yards. ... Bengals third-string QB Casey
Bramlet was 6-of-11 for 41 yards. ... Bengals quarterbacks were
sacked five times.