PHILADELPHIA (AP) -- Duce Staley showed the Philadelphia Eagles
what they're missing. Willie Parker showed the Pittsburgh Steelers
what he can do. 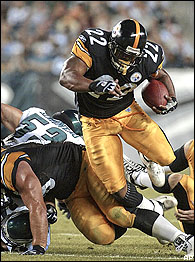 Staley ran for 37 yards and one touchdown in limited action
against his former team, and Parker had 106 yards rushing and one
TD, leading the Steelers to a 27-21 victory over the Eagles in a
preseason game Thursday night.

"It felt great," Staley said. "I have a lot of good memories
from when I played here."

Dante Brown also had a TD run for the Steelers.

An undrafted rookie from North Carolina, Parker perhaps earned
himself a roster spot with his performance.

"Looking at the other running backs out there who were drafted,
I have a chip on my shoulder," Parker said.

Reno Mahe ran for a score and L.J. Smith and Greg Lewis had TD
catches for the Eagles.

A three-time 1,000-yard rusher in seven seasons in Philadelphia,
Staley ran six times for 33 yards on the opening drive, capping it
with a nifty 14-yard TD run.

After running into the end zone, Staley went straight to the
stands and handed the football to young boy wearing a Donovan
McNabb jersey.

"It was just spur of the moment," Staley said.

Philadelphia didn't make a strong push to retain Staley, a fan
favorite who again heard the familiar chants of "Duuuuce!" each
time he touched the ball. But the Eagles could use him now after
losing Correll Buckhalter to a season-ending knee injury last week.

After Jeff Blake connected with Lewis on a 14-yard TD pass to
give the Eagles a 21-17 lead, the Steelers went ahead on Parker's
3-yard TD run early in the fourth quarter.

Ben Roethlisberger, the No. 11 pick in this year's NFL draft,
was sacked on his first play and finished 7-of-11 for 74 yards and
one interception. Starter Tommy Maddox was 4-of-6 for 53 yards.

Terrell Owens, the Eagles' biggest offseason acquisition, didn't
have a catch. His 41-yard TD reception in the first quarter was
negated by a holding penalty on Tra Thomas. He later dropped a pass
that hit him in the chest.

"We're not where we want to be right now," McNabb said. "The
exciting part is we're putting points up on the board. When we're
doing that, you've got some positive things to look at."

The Steelers took a 17-7 lead in the second quarter on Brown's
1-yard TD run. McNabb connected with Smith on an 11-yard TD pass to
cut the deficit to 17-14.

"I dropped two passes and I made a couple mental errors," Mahe
said. "I have to do a better job and help the team."