Call it an imbalance of power. In 2014, Ben Roethlisberger threw for a league-high 4,952 yards, leading the Steelers' offense to its best season of the Big Ben era. The defense, however, was its worst by far in EPA in the nine-year history of the ESPN metric. The team addressed the dreadful D in the offseason by drafting 6-foot-4, 269-pound LB Bud Dupree in the first round. The Steelers are also banking on the development of their other young defensive players, particularly rookie corner Senquez Golson and 2014 first-round LB Ryan Shazier. Shazier played just nine games during an injury-plagued rookie season, but he possesses all the physical tools needed to develop. -- Mike Sando 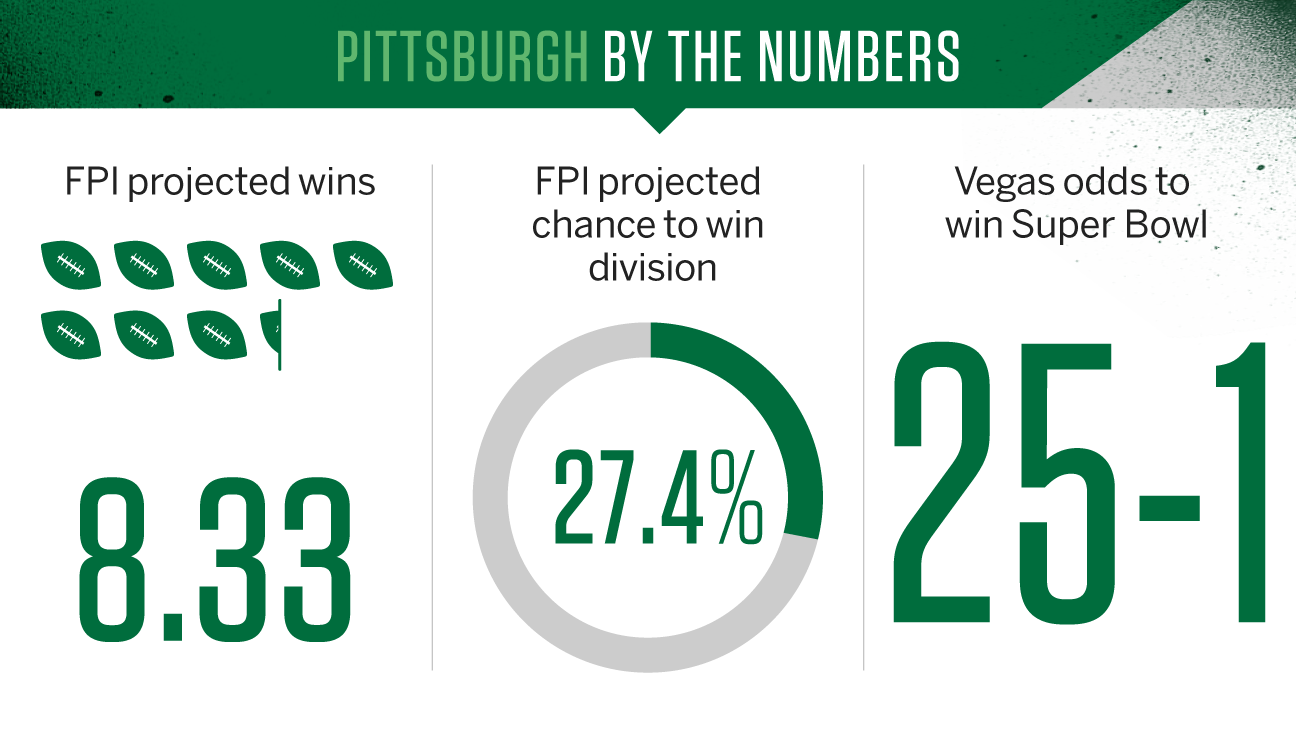 The Steelers have what most teams covet: a top-shelf quarterback (Ben Roethlisberger), wide receiver (Antonio Brown) and running back (Le'Veon Bell) playing in their peak years together. That dynamic can lift the Steelers on those sluggish weeks when nothing's going right, especially with Bell determined to rip up the league after serving a two-game suspension. With quality complementary pieces (Martavis Bryant, after serving a suspension, and Markus Wheaton at wide receiver and Heath Miller at tight end) surrounding that trio, the Steelers should squeeze a double-digit-win season out of a brutal schedule. The Steelers have the strongest strength of schedule (.578) based on opponents' 2014 winning percentage, according to ESPN.com's Stats & Information.

The Steelers' leaky pass defense (27th in 2014) has applied too much pressure on this team for a few years now despite the investment of several first-round picks (linebackers Jarvis Jones, Ryan Shazier, Bud Dupree and DE Cameron Heyward) in the front seven, cornerback and safety. Asking the offense to score 30 points every week isn't a healthy strategy. All those playoff-caliber opponents the final six weeks of the schedule will want to expose that.

The switch to defensive coordinator Keith Butler has the Steelers experimenting with things not done around here in years: 4-3 fronts, linemen in a stand-up stance, creative blitzes from every position. This could breathe new life into a defense eager to showcase its upgraded speed. Or it could backfire. There will be little middle ground here.

The Steelers aren't hiding from their pedigree. Anything less than a Super Bowl push will be a disappointment. Ben Roethlisberger is feeling it, saying to anyone willing to listen the Steelers are aiming for the top spot in every offensive category. He couldn't say that with conviction when the team forgot to turn off the snooze button during back-to-back 8-8 seasons. But the Steelers know they have something special offensively.

The defense held up well enough to produce a 12-win season, a playoff bye and a divisional-round win over Baltimore. But Tom Brady picked the secondary apart with his short passing game on a cold night in New England to earn another Super Bowl berth. Good season, guys. Not quite good enough.