THE NFL'S MOST menacing pass catcher isn't a wide receiver; it's Patriots tight end Rob Gronkowski. Everyone knows the 6-foot-6, 265-pound polar bear is too physical for defensive backs and too fast for linebackers, but the real magic is how the Patriots get him in the matchups they want. Truth be told, Tom Brady & Co. use just a handful of play concepts, but they disguise them well by changing formations and shuffling personnel. Gronkowski, who has the capacity to line up anywhere -- Bill Belichick raved earlier this year about his football IQ -- is the key that makes it all work.

And he's just the tip of a wider trend. With spread offenses taking over the high school and college ranks, tight ends are coming into the NFL more capable of running the same routes as those speedy guys on the outside. Since 2005, tight end targets are up 26.9 percent and receptions are up 31.7. This season alone, tight ends have lined up in the slot on more than 20 percent of all plays -- a 32 percent increase from 2008, when ESPN began tracking formation data.

But Gronk still stands out from the crowd -- for his production and for how creatively the Patriots use him. This season he has set up as a traditional on-the-line tight end on only 45 percent of his plays, compared with the league average of 66 percent. He's been split wide on 22 percent of plays, most of any tight end, and in the slot 32 percent of the time (10th among tight ends with at least 100 snaps). Results have followed: Through Week 10, his 806 receiving yards and 49 receptions were tops in the NFL for tight ends, and his eight TDs ranked second.

Here, we break down three routes that show how the Patriots use Gronk to attack three of the most common defenses: man, cover 2 and cover 3. Teams have tried other ways to stop him, but so far none has worked.

On the goal line, the Patriots look for one-on-one man coverage, with Gronk matched up against a linebacker.

1. When the Patriots send their jumbo personnel into the game, the Steelers counter with their goal-line package. That's standard procedure in the NFL. But just before the snap, the Patriots shift tight end Scott Chandler into the slot and Gronkowski out wide, like a receiver. This forces Steelers linebacker Terence Garvin to walk out and match Gronk in coverage.

2. Earlier in the game, the Patriots ran the slant-flat combination (or rub route) from this exact alignment. But given the favorable matchup for Gronkowski vs. pretty much any linebacker, this is the perfect opportunity to throw the fade.

3. On the release, Gronkowski takes a quick inside stem. That forces Garvin to give ground and creates immediate separation for Gronkowski to work back up the field on the fade. With Garvin now stuck trailing the route, Brady can put some air under this throw and deliver a catchable ball for the tight end to finish for six. 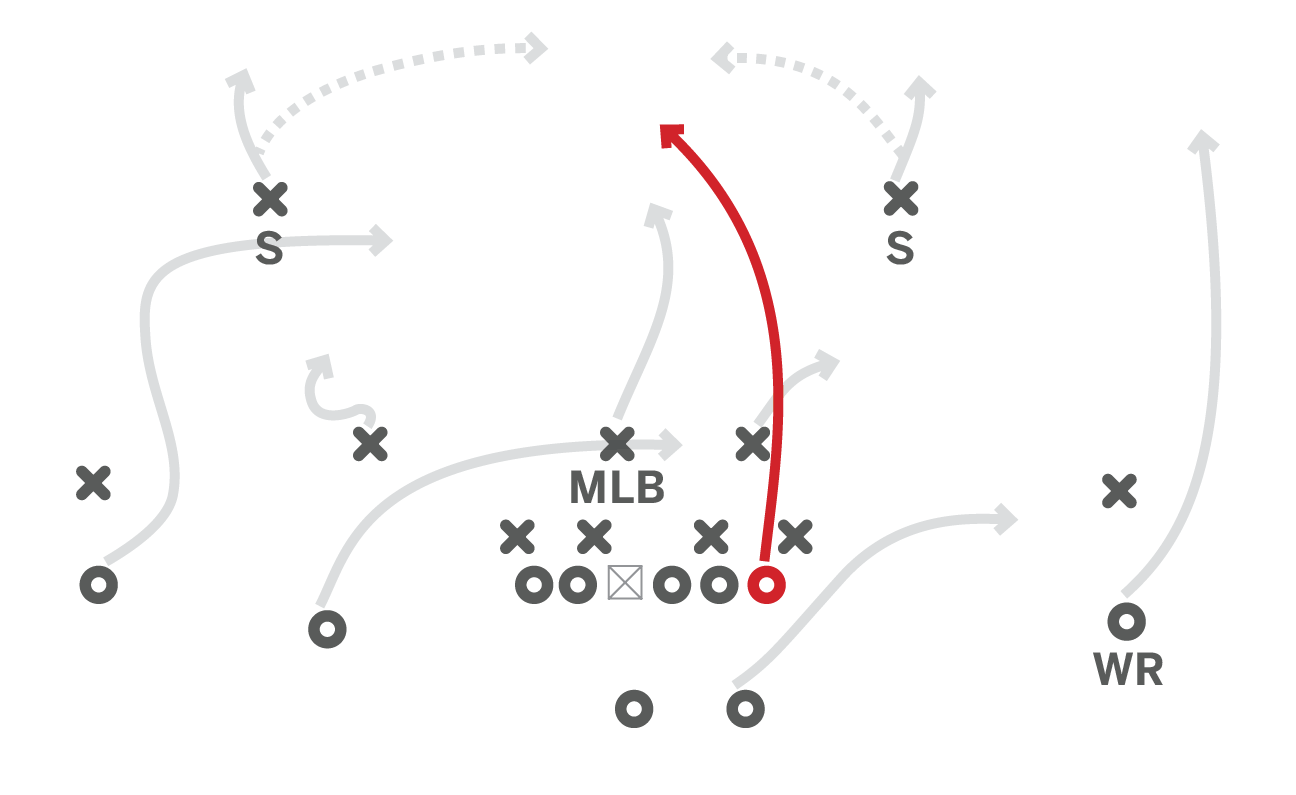 Cover 2, with two deep safeties in zone, doesn't do much to stop Gronk. Here, the Patriots deploy one of the top cover 2 beaters in the NFL: the inside seam.

1. Knowing that coach Gus Bradley's Jags are a zone-based team, the Patriots set up Gronkowski on the line, with WR Julian Edelman split wide to his right. Edelman runs a fade to hold the safety, allowing Gronk to run his seam up the field against middle linebacker Paul Posluszny.

2. In cover 2, the middle linebacker has to run with the inside seam, with both safeties overlapping the throw or driving to the middle of the field as backstops from the deep half. This essentially creates a one-on-one for Gronkowski in the middle when he bends the route inside of the hashmarks. It's a matchup Tom Brady loves to exploit when he reads two-deep zone coverage in the secondary.

3. Gronkowski separates from Posluszny on the inside stem and continues to bend his route back to the middle of the field. This gives Brady a clear throwing window to drop the ball over the top of Posluszny before the safeties, breaking on the throw, react and drive to the tight end. The result is an easy 27-yard gain that sets up a Brady TD pass to WR Danny Amendola two plays later to close out the half. 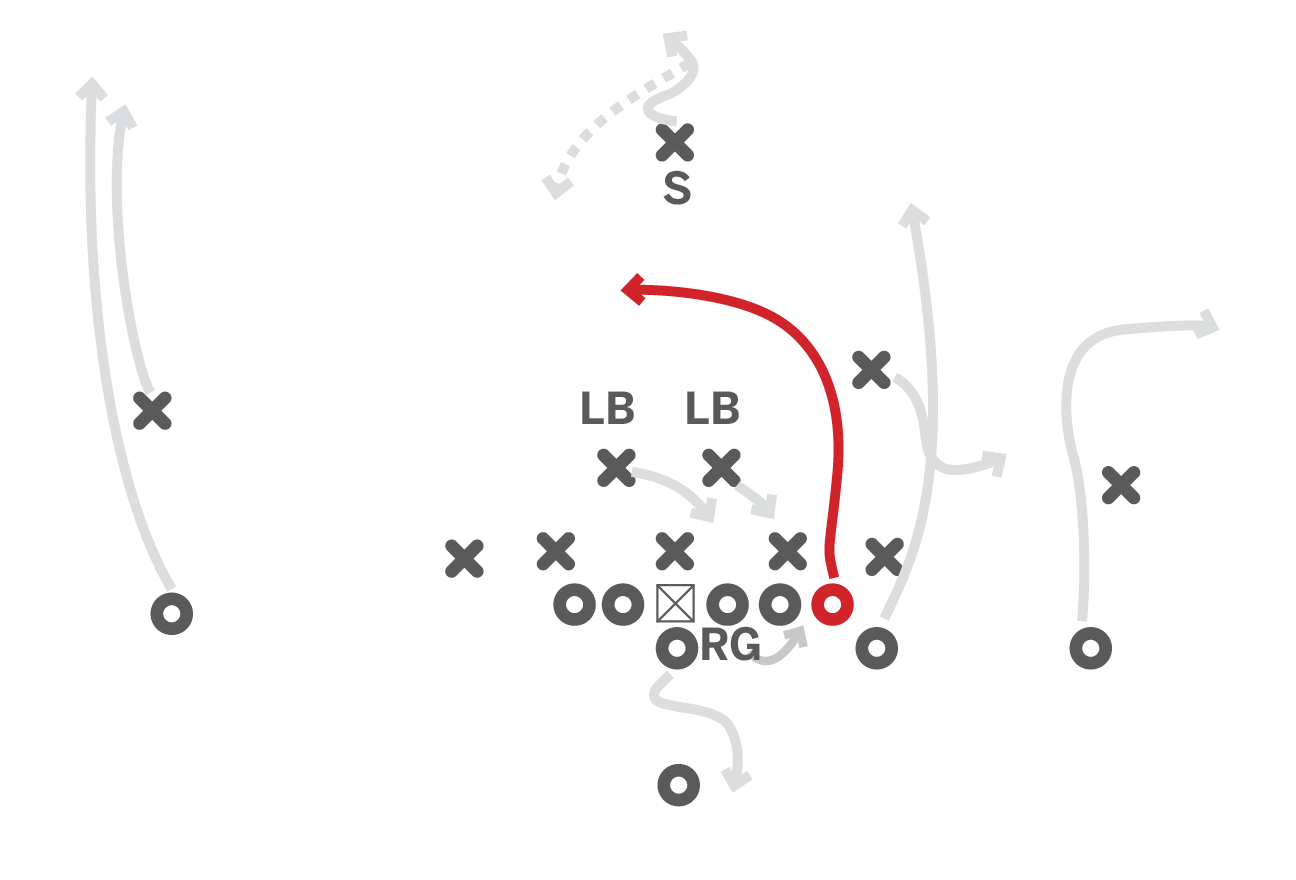 It's just as dangerous to be in cover 3 -- where the corners fall back into zone with a deep free safety -- against the Pats. If Gronk gets free in the middle of the field, one safety is hardly a sufficient last line of defense.

1. The Patriots set the bait earlier in the drive, showing this same backfield action on power runs, with the guard pulling to the play side of the formation. Here, they pull the guard (again) to give the Colts a false run read and suck their linebackers toward the line of scrimmage.

2. With the Colts' linebackers now removed from the inside throwing lanes and Gronkowski getting another free release off the line, the Patriots tight end can stem up the field and break back inside on the dig route. This allows Brady to flip his hips off the run action, set his feet and deliver the ball.

3. After the catch, Gronkowski is now in a position to turn up the field. That's an issue for the Colts in their cover 3 scheme as free safety Dwight Lowery drops to the deep middle of the field. Lowery can't recover in time, or create the proper angle, to cut off Gronkowski in the open field, allowing the tight end to race to the end zone for the 27-yard go-ahead score.