The New England Patriots have by far the best record in the NFL since the start of the 2001 season, when Tom Brady ascended as starting quarterback for coach Bill Belichick's team. Their 200 victories during that period is 35 more than the next-most-accomplished team, and Super Bowl LIII will mark the Patriots' ninth Super Bowl appearance since 2001.

Brady is going to the Pro Football Hall of Fame one day, and Belichick might well be remembered as the best football coach in history. Yet their margin of victory and defeat in Super Bowls is incredibly small. All have been decided by one score, with an average point differential of 4.25. Only 12 of the other 44 Super Bowls have been decided by one score. Eighteen of the 50 biggest single-play swings in Super Bowl win probability -- a statistical model that estimates, based on history, a team's chances of winning given the exact circumstances of the moment -- have occurred in games involving the Patriots since 2001. Viewed objectively, the Brady-Belichick Patriots are but a handful of plays away from never winning a Super Bowl -- or winning all eight.

So what does dominance really look like in the age of NFL parity? Let's use win probability to identify a handful of plays that have cemented the Patriots' place in history. In some cases, the plays that most swung the likely outcome could be different from what you thought.

Play No. 2: Two plays after regaining possession, Brady lost a fumble on a sack by defensive end Brandon Graham. Defensive end Derek Barnett then recovered the ball well within kicker Jake Elliott's range. That brought the Patriots' win probability from 18.3 percent to 1.6 percent. Elliott's 46-yard field goal with 1:10 left accounted for the final score. (In a testament to how close these games have been, this one was the second Super Bowl that ended on an incomplete Hail Mary attempt by New England.) 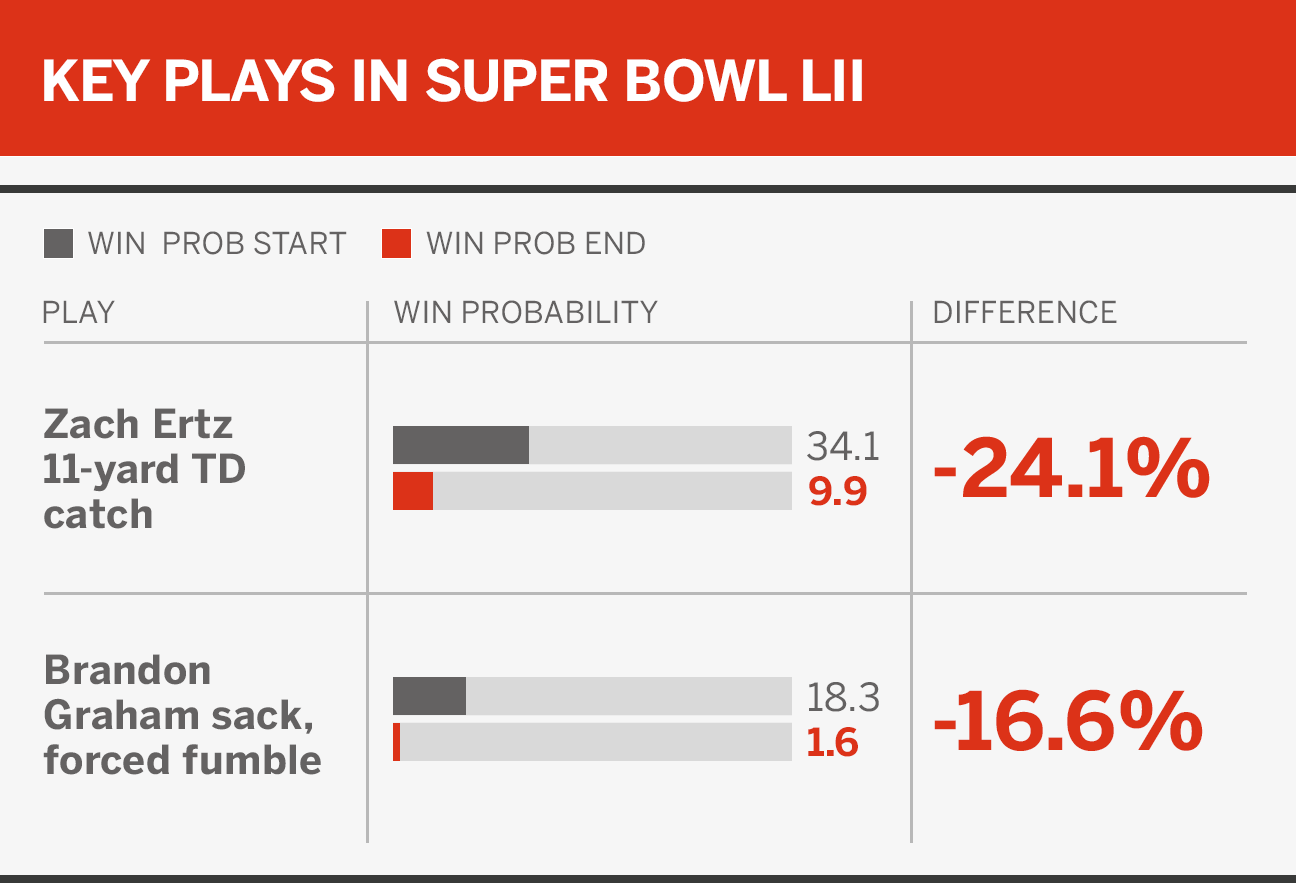 Play No. 1: The Patriots had pulled to within two points in a record-breaking fourth-quarter comeback, but with only 57 seconds left, the ensuing two-point conversion was probably a make-or-break play. They had only two timeouts remaining, so barring recovery of an onside kick, the Falcons could have run out the clock on the next possession. In the 2016 regular season, NFL teams converted two-point plays 48.6 percent of the time. (The Patriots were 1-for-2; in the Brady era they are 16-for-32.) Brady's successful pass to Danny Amendola to fully erase Atlanta's 25-point lead was hardly a given.

Play No. 2: The Patriots were not yet in field goal range, much less in position for the winning touchdown, when they faced second-and-13 at the Falcons' 40-yard line on the fifth play of overtime. But Julian Edelman's 15-yard reception put the Patriots in scoring position for their first lead of the game. Three plays later, one of which was a Falcons pass interference penalty, the Patriots won on James White's 2-yard scoring run and clinched their fifth championship since 2001. 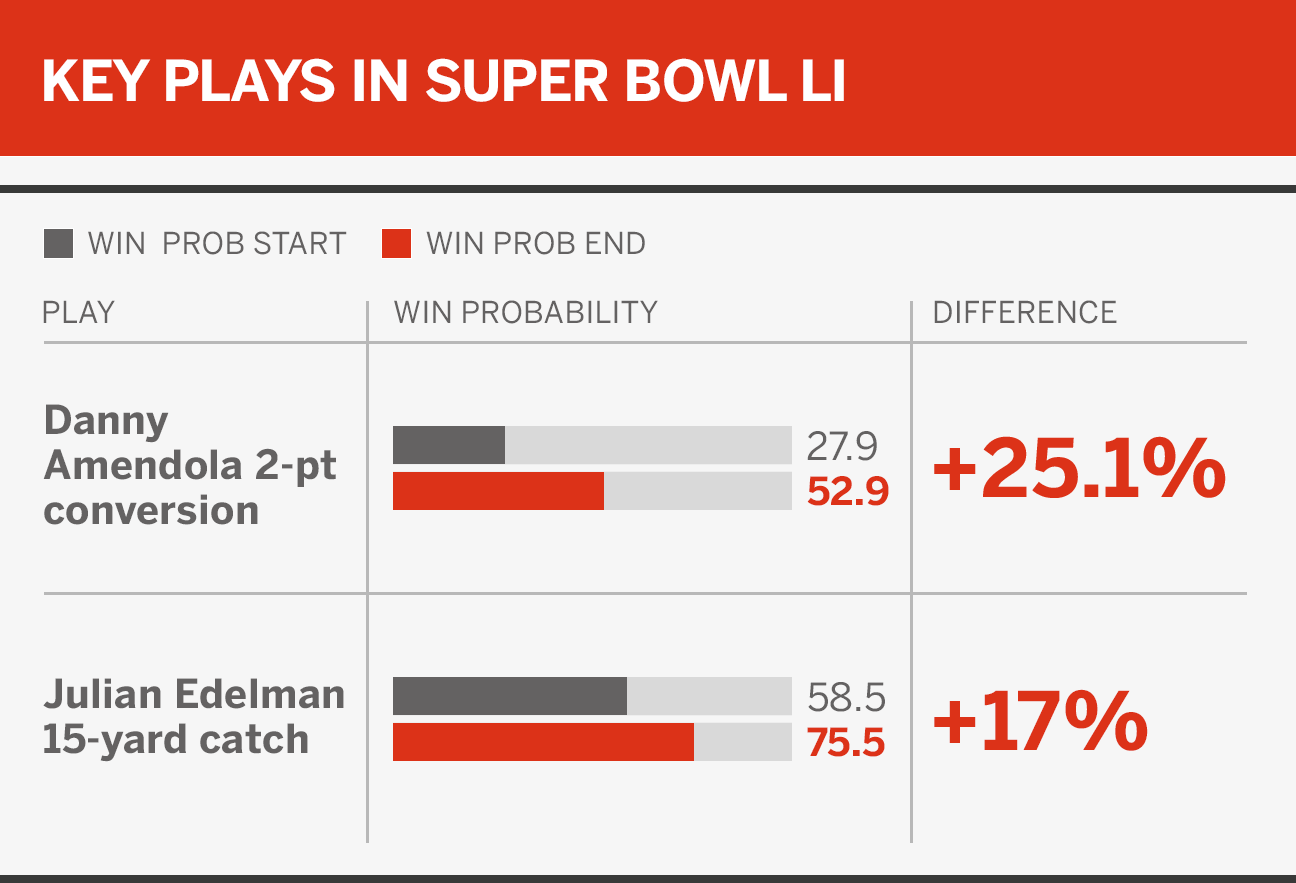 Play No. 1: The Seahawks faced second down at the Patriots' 1-yard line with only 26 seconds left. You remember what happened next, right? Rather than handing off to running back Marshawn Lynch, Seattle opted for a quick pass play. But Patriots cornerback Malcolm Butler intercepted Seahawks quarterback Russell Wilson's pass to prevent the go-ahead touchdown, preserve the lead and seal the victory.

Play No. 2: Before New England won it, one big play also set up a loss. The Patriots seemed to have their fourth title wrapped up before Seahawks receiver Jermaine Kearse secured a miracle 33-yard catch on the right sideline. Trailing by only four points and needing a touchdown to win, the Seahawks were suddenly in business at the Patriots' 5-yard line with 1:14 left -- a sequence that evoked memories of two other incredible catches that helped defeat New England in previous Super Bowls. 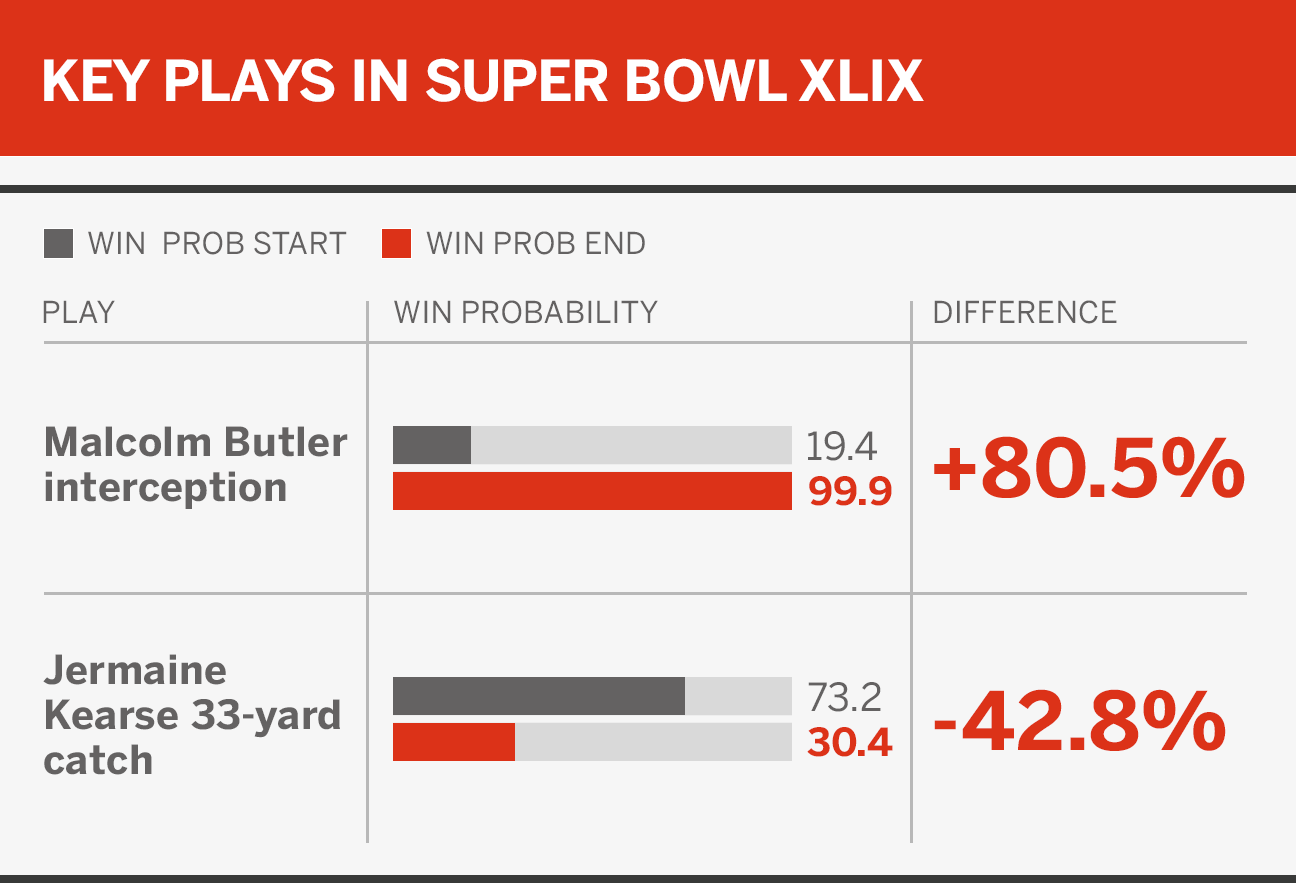 Play No. 1: Although a beautiful 38-yard sideline catch by Giants receiver Mario Manningham is etched in our memories, the Patriots were still in decent shape at that point. They held a 17-15 lead with 3:46 left. The ball was at midfield, and their win probability remained 53.3 percent. The real killer was quarterback Eli Manning's 14-yard pass to receiver Hakeem Nicks, about a minute and a half later, on second down. That play put the Giants inside the Patriots' 20-yard line (at the 18) with a fresh set of downs, well in range of a field goal.

Play No. 2: A field goal in that situation wouldn't have been a crusher, but the Patriots would have gotten the ball back needing only a field goal of their own to win. (Stephen Gostkowski had converted all five postseason attempts and had missed only twice since Halloween.) But with 1:04 left, Giants running back Ahmad Bradshaw broke through on a 6-yard touchdown run to give New York a four-point lead. Bradshaw unsuccessfully tried to give himself up before getting into the end zone, hoping to use more time, but in the end the Patriots didn't have much chance to launch a touchdown drive of their own. 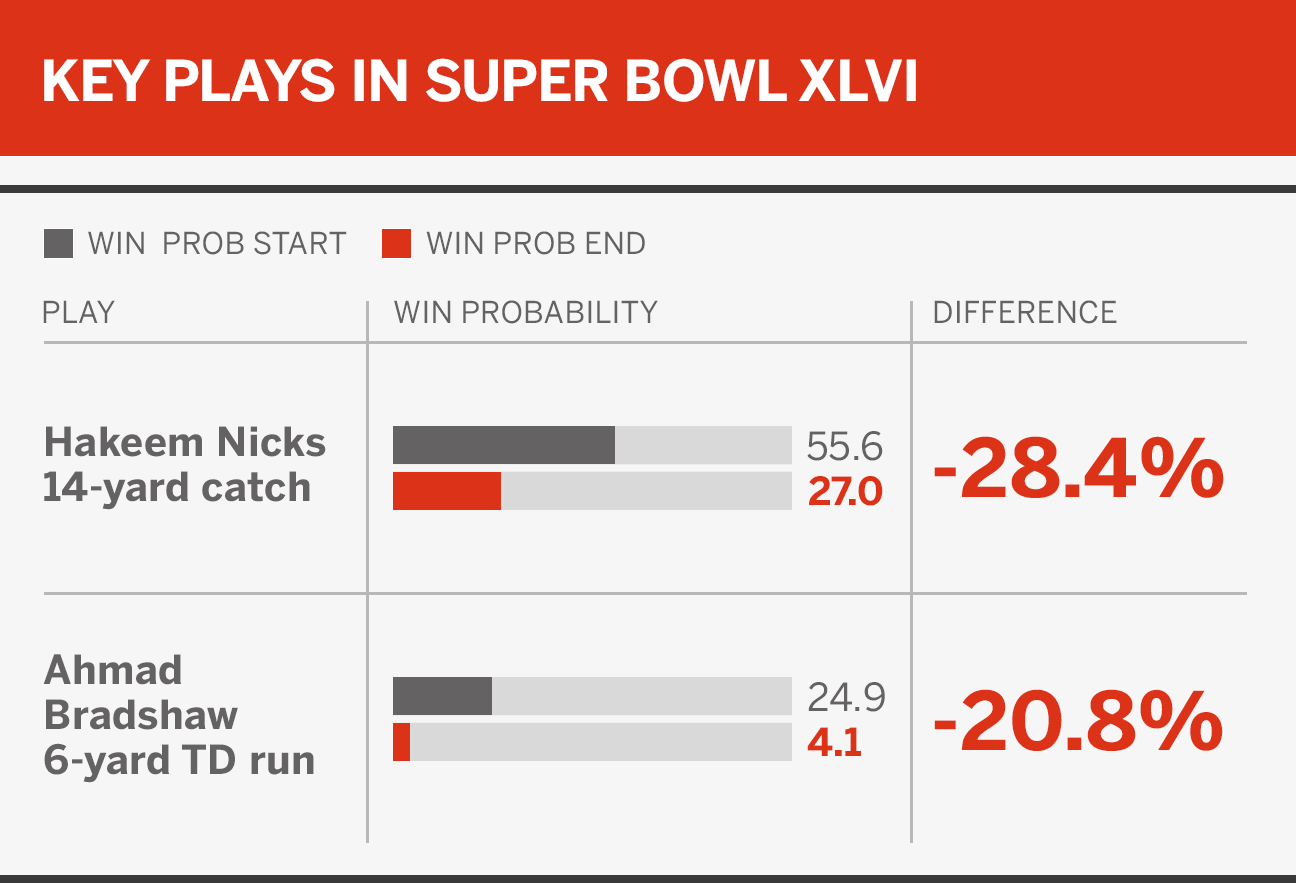 Play No. 1: Trailing by four points with 39 seconds left, the Giants had a first down at the Patriots' 13-yard line. With no timeouts remaining, the win probability model saw their potential success as a 50-50 proposition. But Manning immediately tossed a perfect pass to receiver Plaxico Burress for a score that left the Patriots with less than a 10 percent chance of winning.

Play No. 2: No one will forget receiver David Tyree trapping the ball on his helmet for a 32-yard reception to extend the Giants' winning drive. But it still left the Giants 24 yards away from victory as the clock ticked. The play that really put them in business, especially considering they were out of timeouts, was a 12-yard pass to receiver Steve Smith, one that converted a third-and-11 with 45 seconds left. That play set up the winning score, the aforementioned Burress touchdown. 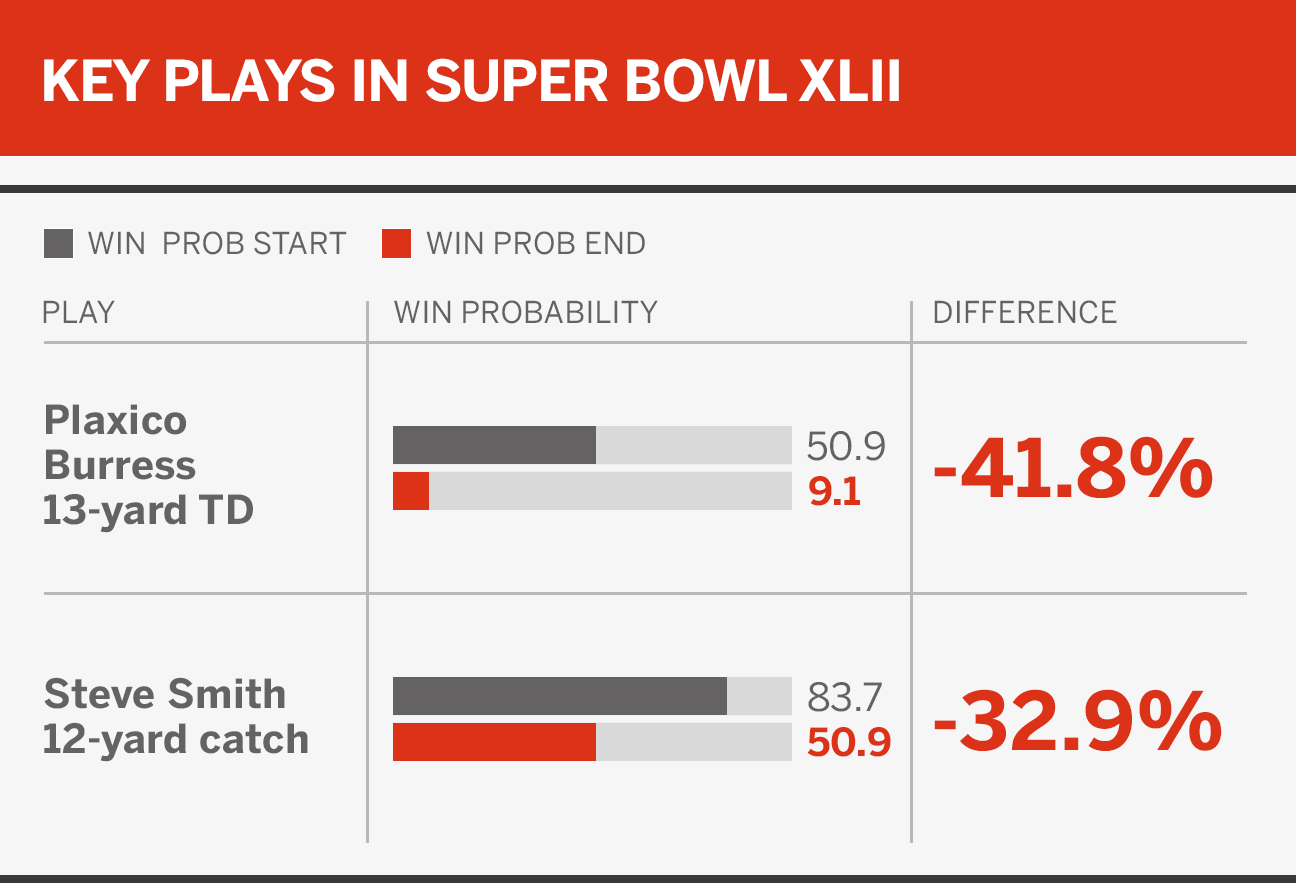 Play No. 1: Safety Rodney Harrison intercepted a Donovan McNabb pass at the Patriots' 4-yard line to terminate an early Eagles scoring threat. True, the play occurred in the first quarter, but Harrison probably saved at least a field goal in a game that was ultimately decided by three points. It was the first of his two interceptions in the game, later clinching it by picking off McNabb deep in Philadelphia territory in the dying seconds of the fourth quarter.

Play No. 2: Tied 7-7 early in the third quarter, the Patriots faced third-and-10 from the Eagles' 38-yard line. They were well out of comfortable field goal range. That's what made Brady's 15-yard pass to receiver Deion Branch so important. It converted a first down and set up the Patriots' first lead of the game, a 2-yard touchdown pass to Mike Vrabel. The Patriots did not trail the rest of the game. 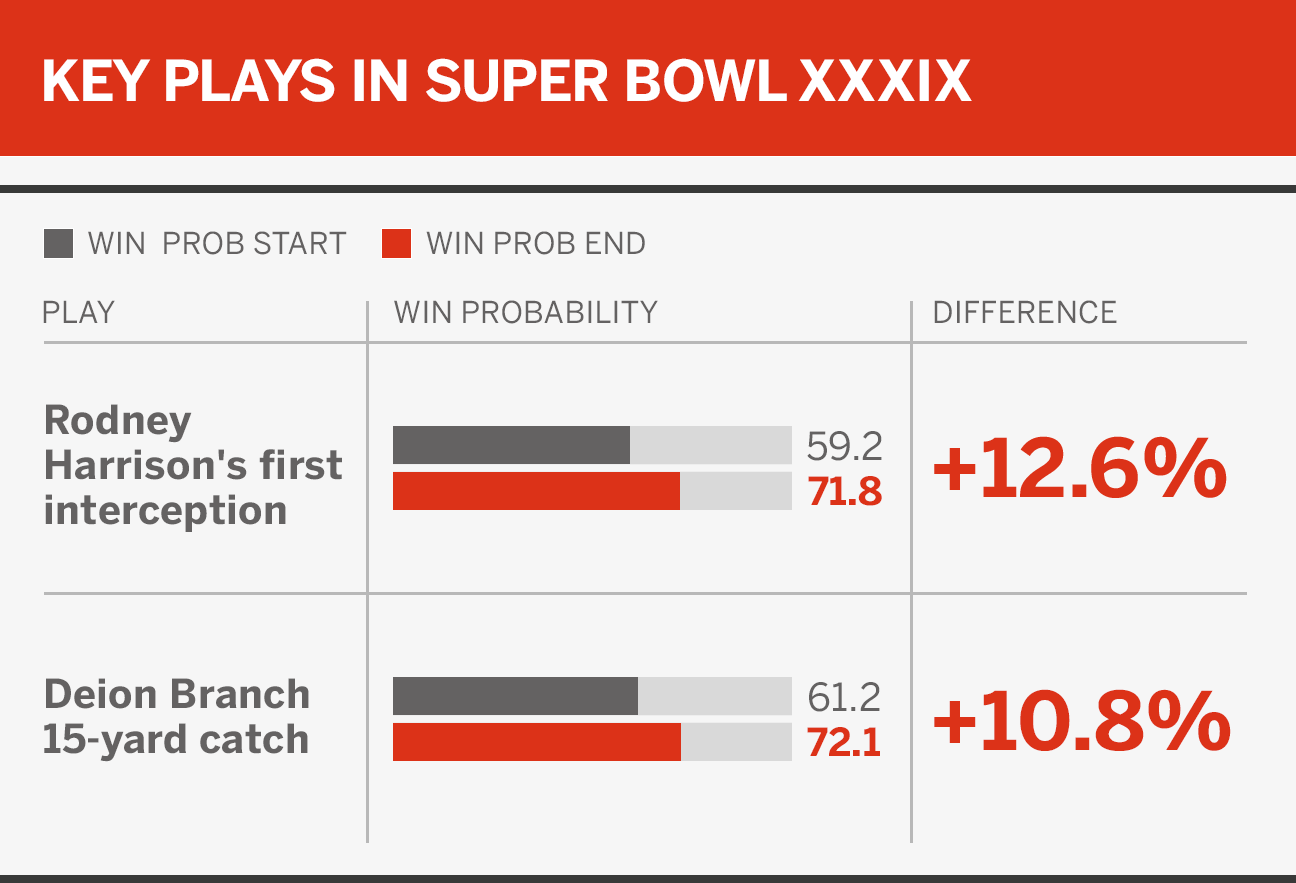 Play No. 1: The Patriots were trailing 22-21 in a wild fourth quarter when they faced third-and-9 from the Panthers' 21-yard line at the 3:40 mark. A field goal would have provided a precarious lead given the Panthers' ongoing offensive explosion, but Brady found receiver David Givens for an 18-yard gain to the Panthers' 3-yard line. Vrabel's ensuing 1-yard touchdown reception and Kevin Faulk's two-point conversion run put the Pats up 29-22, and they never trailed again.

Play No. 2: The Patriots glided down the field after the Panthers tied the score at 29, and Adam Vinatieri's 41-yard field goal with four seconds left clinched it. He had missed only one field goal all season, but the NFL average conversion rate from 41 yards that season was a relatively low 71.4 percent. 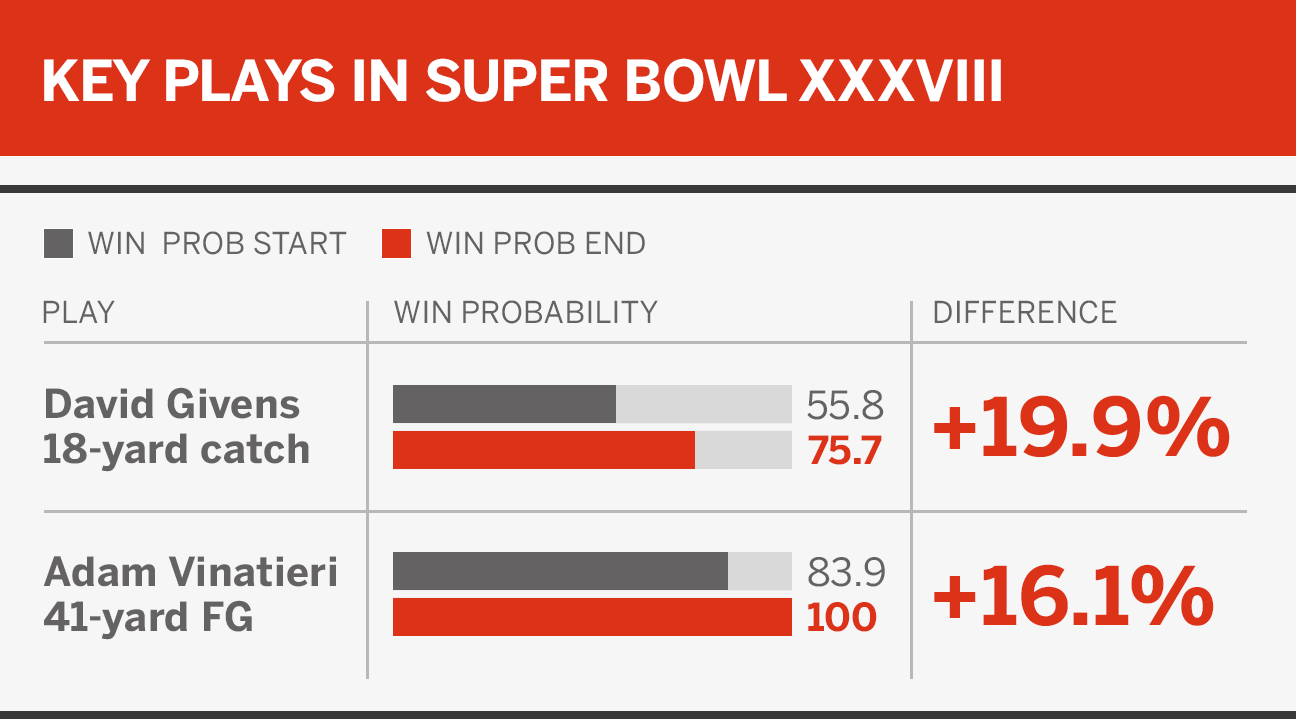 Play No. 1: Vinatieri's 48-yard field goal with no time left started the Patriots' dynasty. Keep in mind that in 2001, NFL place-kickers converted 46.8 percent of 48-yard attempts. Vinatieri had converted only 58.3 percent of attempts between 40 and 49 yards. The win probability model accounted for the indoor environment of the Superdome, and at the worst, the Patriots were going to overtime with the Rams, tied at 17. In those days, it was a relatively low-percentage attempt. Who knows ... maybe the Patriots bookend their six titles with big-time field goals against the Rams?

Play No. 2: The drive that led to Vinatieri's kick included so many memorable plays, but the Patriots' win probability swung most dramatically after Brady's 23-yard pass to Troy Brown. The play put the ball at the Rams' 36-yard line, nearly in Vinatieri's range, with 29 seconds left. It was the first time during the drive that the Patriots had a better than even chance to win. 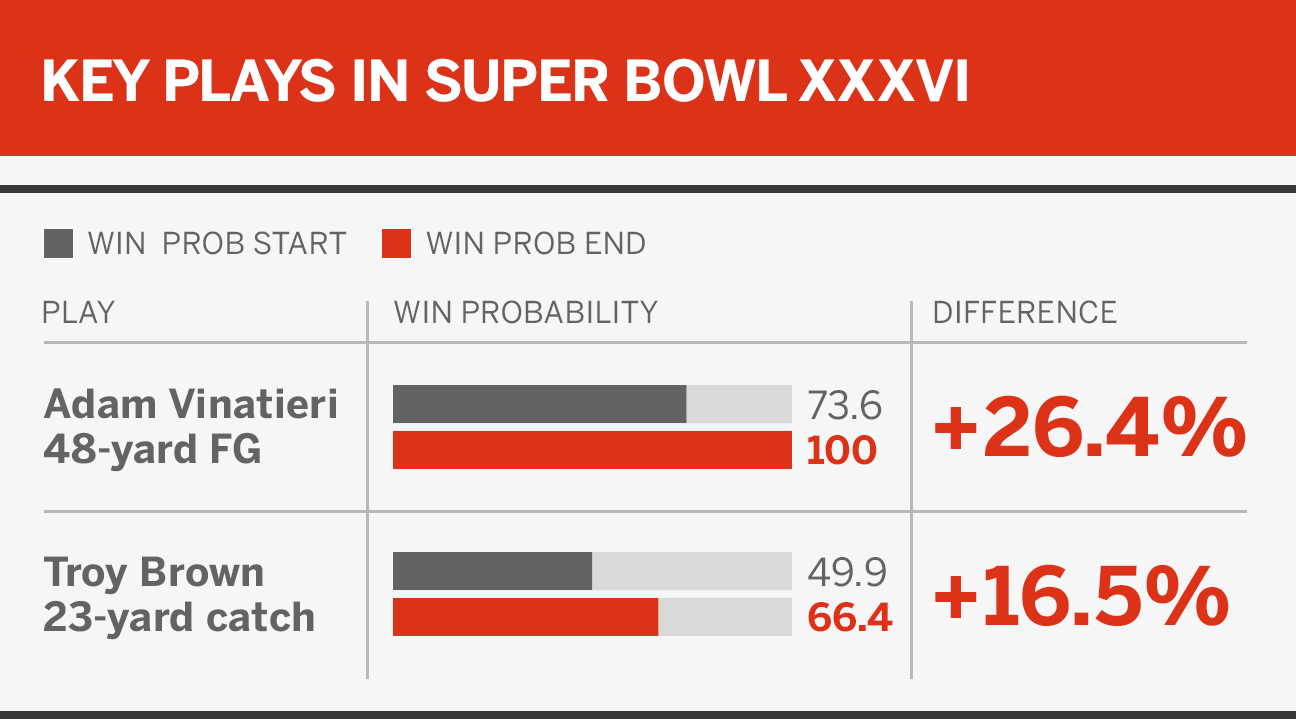 This is an updated version of a story that first appeared prior to Super Bowl LI. Research is courtesy of ESPN Stats & Information senior statistics analyst Jacob Nitzberg. In each of the charts, the difference signifies the change in win probability from the start of the play to the end of the play, and the percentage always refers to the Patriots' win probability.