We've been doing Uni Watch design challenges for more than a decade now. Sometimes the topic is a juicy one, such as when we invited readers to redesign the Cleveland Browns jerseys, a team whose no-frills look practically provides a blank canvas for a potential makeover.

Our latest challenge was trickier. With the Oakland Raiders moving to Las Vegas, we wanted to see how they might look after getting a facelift for their relocation to the desert. Tinkering with the Raiders' look is a dicey proposition because most fans like the team's uniforms just the way they are. How can you mess with the iconic silver and black?

Many of our readers were nonetheless game for the challenge. Here are some of the best and most interesting design submissions we received. Just suit up, baby! (For all images, you can click on the design to see a larger version.)

Best use of gold: Brian Vilven

Many of our reader-designers attempted to Vegas-ize the Raiders' look by adding a splash of gold. Brian Vilven came up with the most successful version of that approach by augmenting the team's standard silver and black with gold numbers and trim. The result looks a lot like the season-opening, gold-trimmed MLB uniforms worn by recent World Series champions -- a snazzier iteration of the team's basic look. Nicely done.

Best use of black at home: Vince Rabago 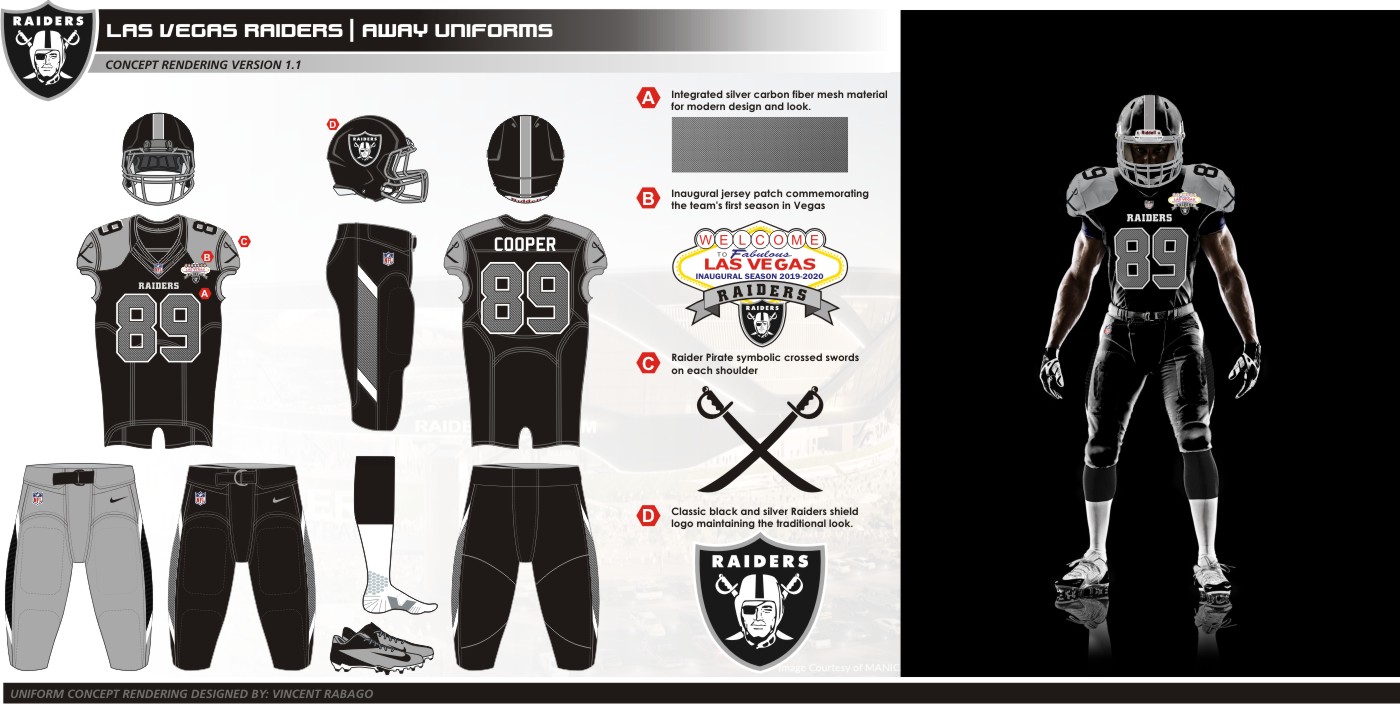 When the NFL began its Thursday-night Color Rush uniform program two seasons ago, many fans hoped the Raiders would go with solid black. That didn't happen (they went with solid white), but several of our entrants tried to go that route with their submissions. The best of these designs came from Vince Rabago, whose proposed home uniform really puts the black in the silver and black, with the silver numbers and shoulders providing just enough of a counterpoint.

Best use of black on the road: Alex Rocklein 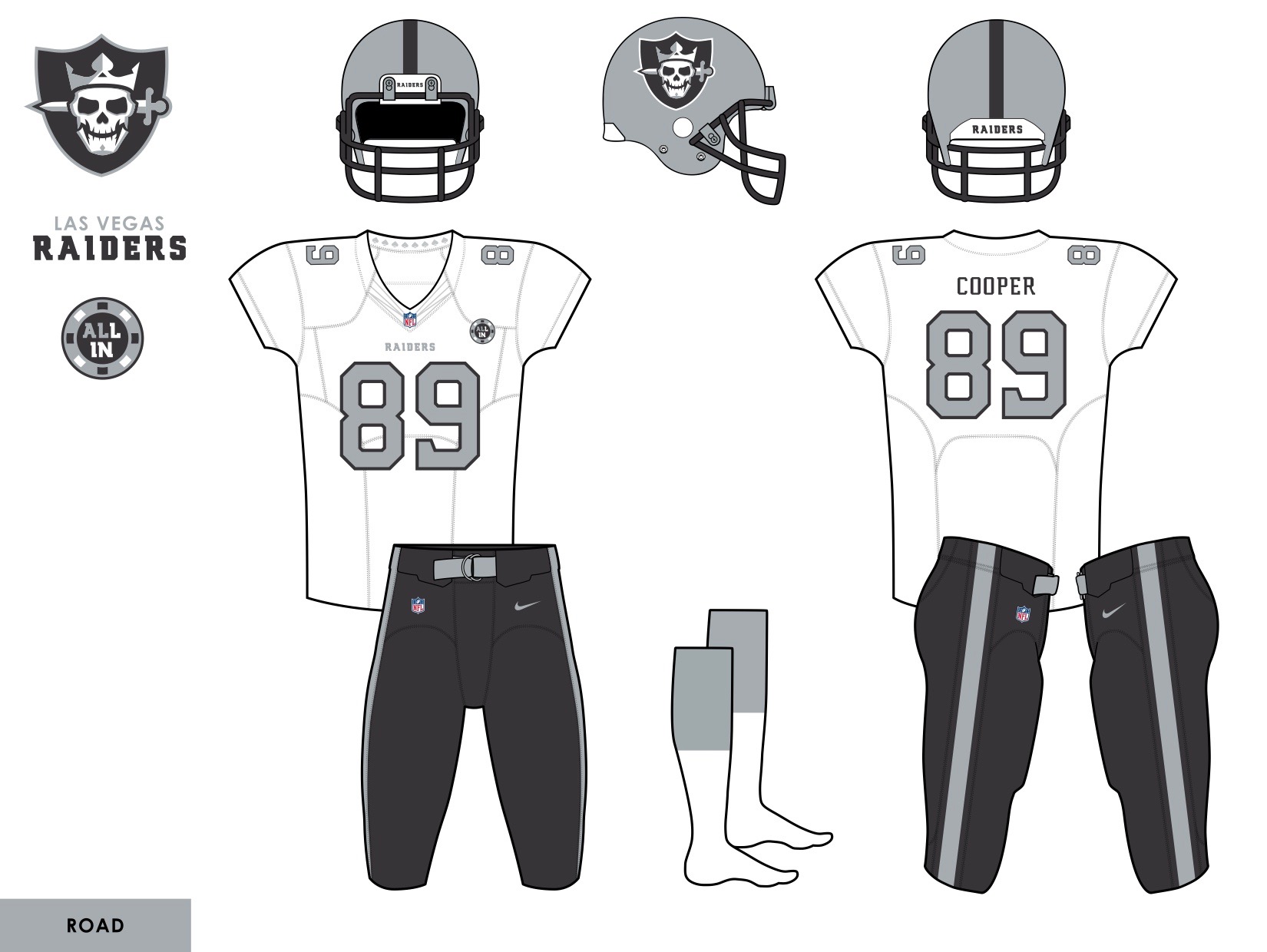 Sometimes the best solution is the simplest one. Alex Rocklein added a lot of punch to the Raiders' road look by simply changing the pants from silver to black. Look closely, and you can see that he also came up with a clever patch to mark the team's first season in Vegas: a silver and black poker chip that says, "All In." 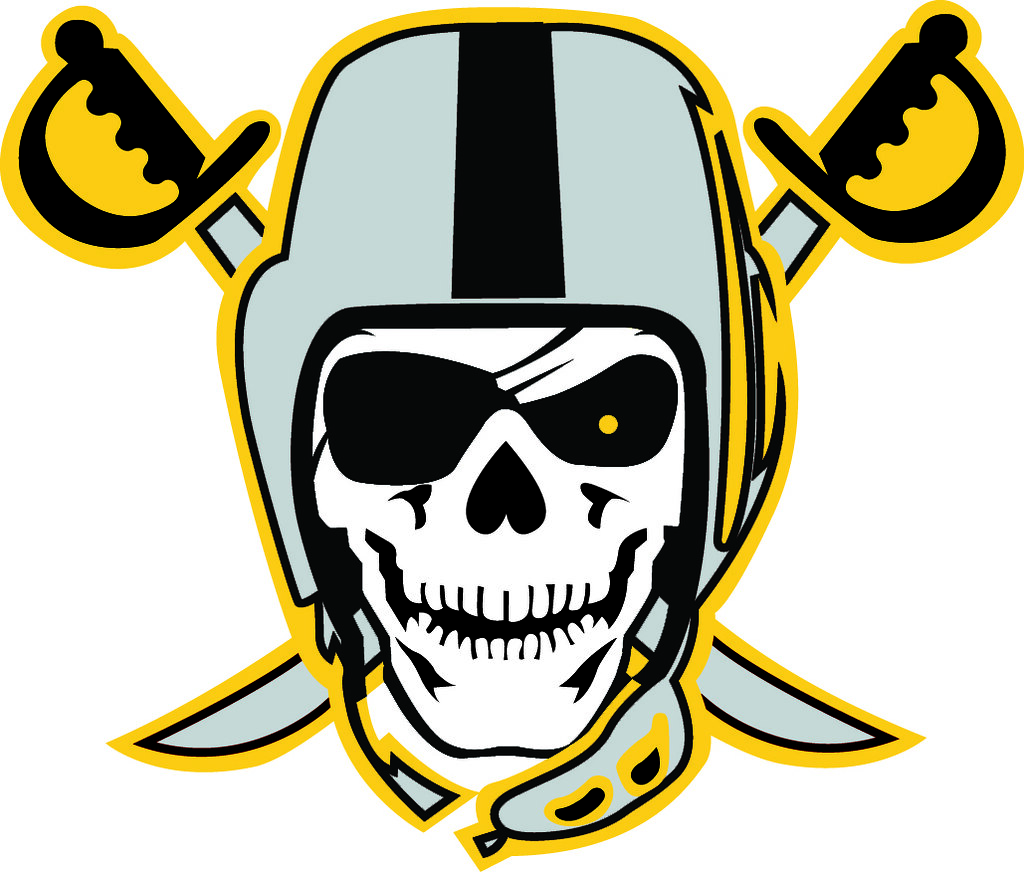 David Britt created a powerful look by starting with the Raiders' basic logo, changing the eye-patched player's head to a skull and adding some gold outlining for a touch of Vegas bling. Granted, the combination of crossed swords and a skull has already been used by the Bucs, but some overlap is inevitable when you're dealing with raiders and buccaneers, which are essentially synonymous. In any case, Britt's proposed logo is better than the Bucs' real logo, so he need not apologize for using the skull 'n' swords motif. 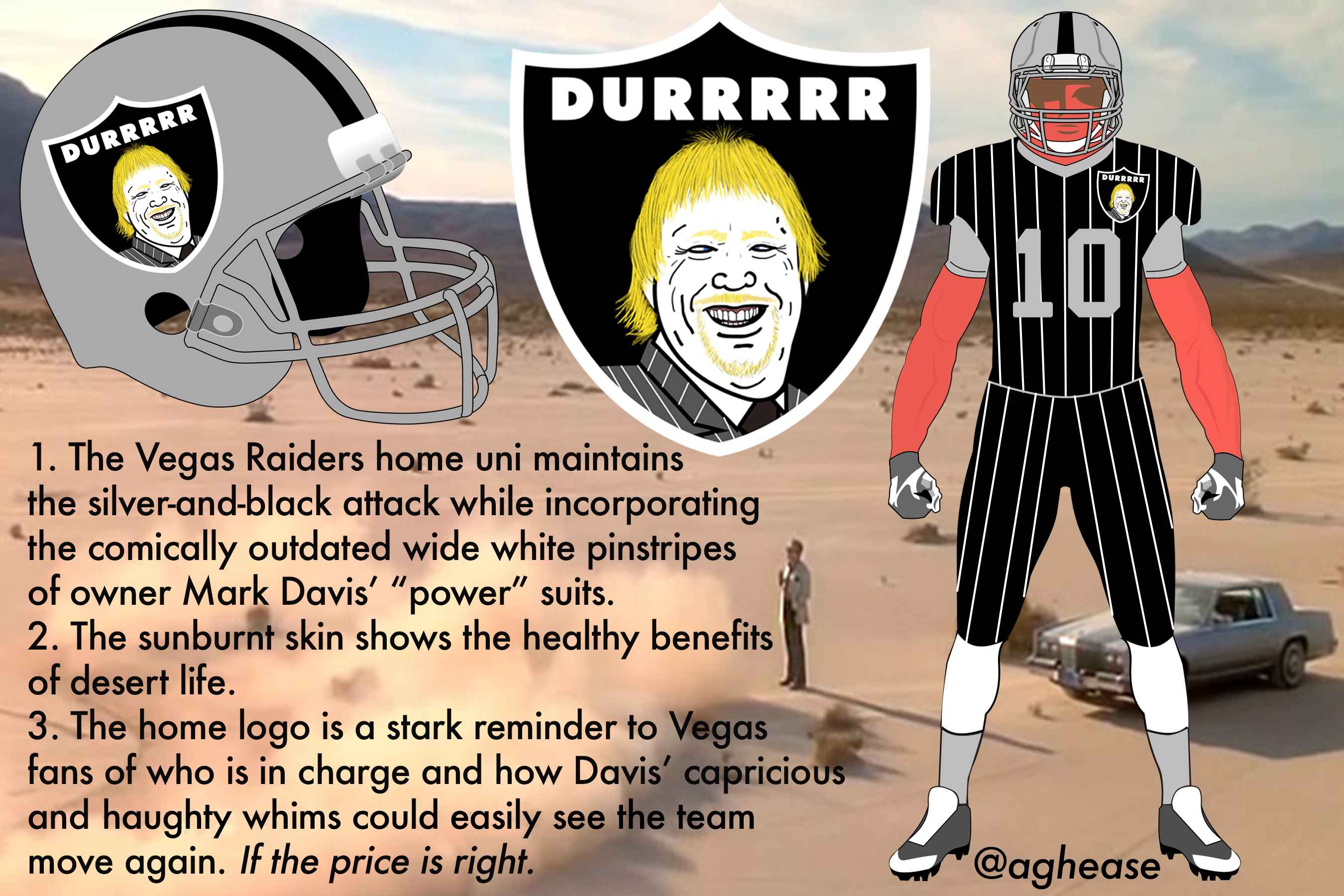 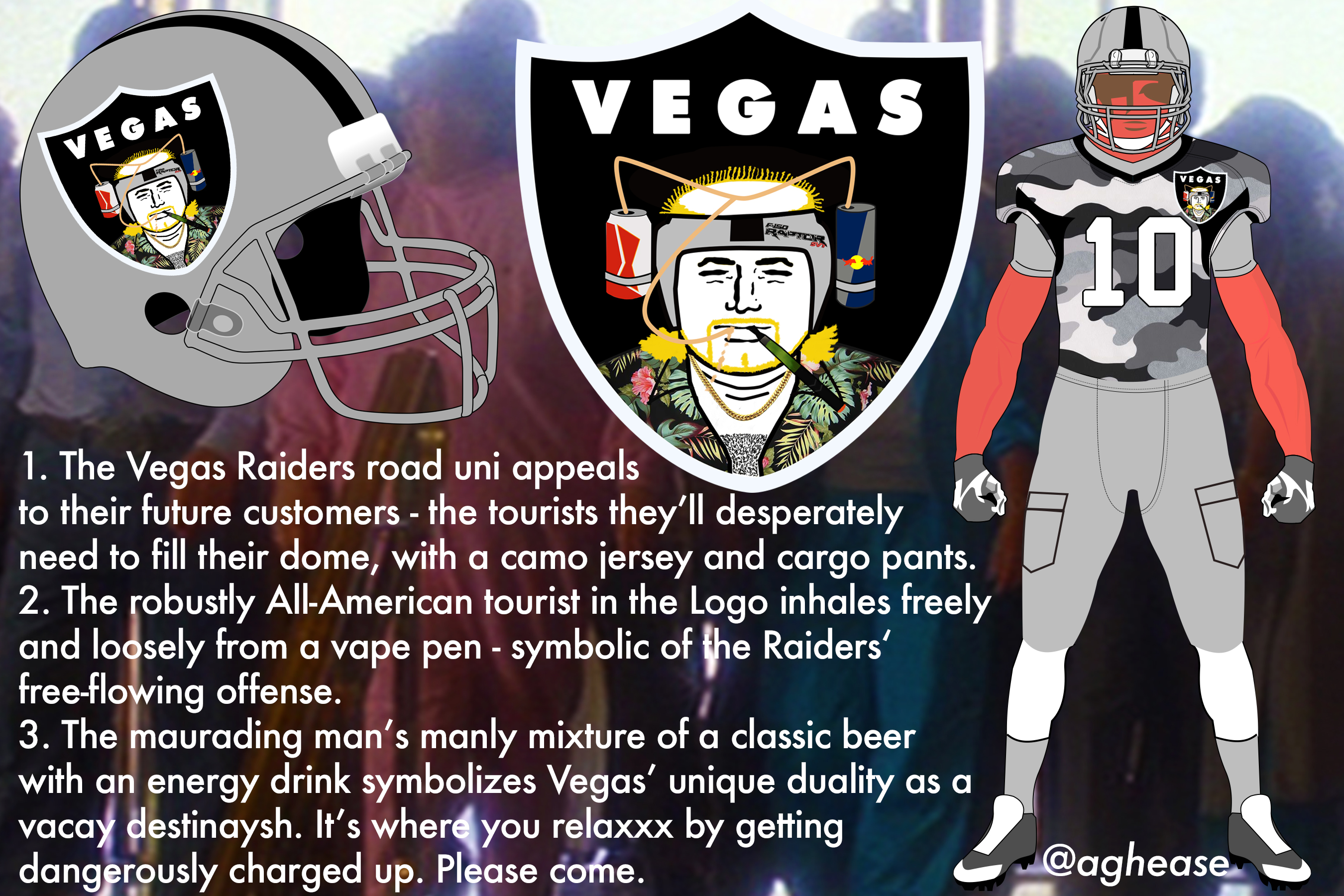 Our design challenges often result in a few readers' submitting sarcastic or humorous entries. Most of them are forgettable, but it's hard to not like the ones sent in this time by Aram Gumusyan, who managed to mock Raiders owner Mark Davis, the city of Las Vegas, Vegas tourists, vaping, cargo shorts and desert-based real estate development all in the course of two uniform designs. (Gumusyan, incidentally, is not a disgruntled Raiders fan based in Oakland. He describes himself as an "all-purpose satirist who also hates to see teams leave and cities waste money on stadiums.")

Several other readers came up with design elements that are worth mentioning:

• Tyson Billings was another entrant who came up with a good skull-based logo, which he used to anchor his proposed field design. His logo design was among the few that referenced the entire state of Nevada, instead of just Las Vegas.

• Although the Raiders are usually associated with silver and black, they actually wore gold and black their first three seasons, 1960 through 1962. Instead of adding gold to their current look, Ayden Opfer came up with a gold-trimmed throwback approach.

• The "Less Is More" award for the subtlest design alteration goes to Cody Sura, whose makeover of the Raiders' home uniform simply entailed changing the team's shoe color from white to black.

Want to see more? You can view all of the submissions we received here.