The 2017 draft class of running backs is really good, perhaps the best the NFL has seen in a decade.

But are any of them valuable enough to be one of the richest running backs in the league, like, immediately?

Decision-makers will weigh that unique calculus Thursday at the top of the first round, a counterintuitive imposition that reflects the disposable nature of the position and exposes a stark refusal to fund it.

The NFL's rookie pay scale, which is meant to cap a player's earnings far below those of the league's most accomplished veterans, actually ends up working in a first-round running back's favor. Those who are highly drafted get a contract that guarantees more money than most others at the position because of the devaluing of the position leaguewide.

Don't believe me? Take a look at these numbers from ESPN Stats & Information that show the average guaranteed money for the five highest-paid players at each position: 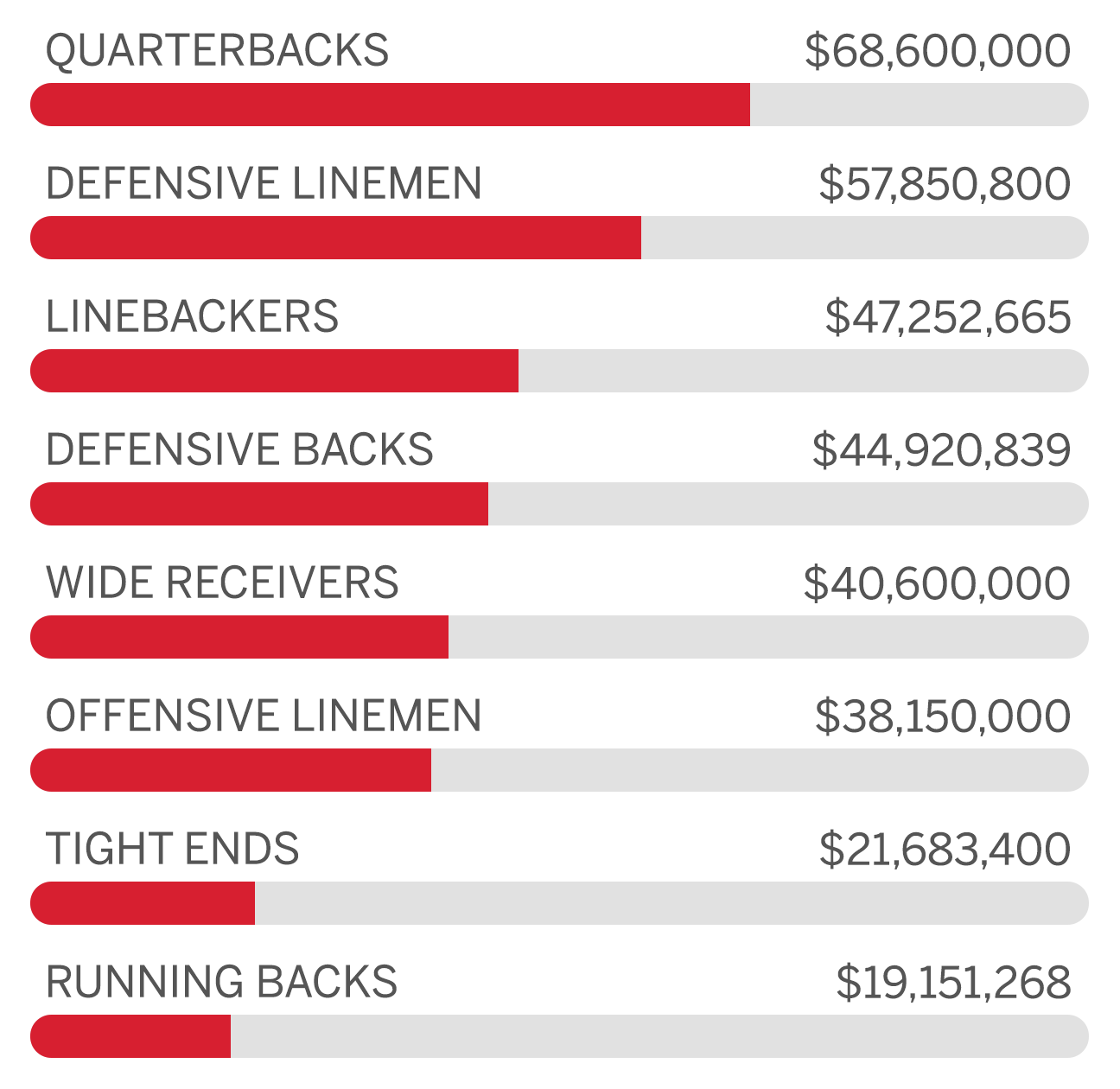 All three were among the richest players at their position before ever playing a down. That's extremely unusual compared with all other positions.

Generally speaking, if an NFL player is going to receive top-end money, it comes with his second contract. Running backs rarely get one, for reasons we'll consider in a moment, and thus the rookie scale by default imposes high-end deals on first-round picks.

If a running back is selected in the top 10 on Thursday night -- perhaps LSU's Leonard Fournette, Florida State's Dalvin Cook or Stanford's Christian McCaffrey -- he will be guaranteed more money than every running back in the NFL except Elliott and the Buffalo Bills' LeSean McCoy ($26.55 million).

Considered more broadly, a first-round pick in 2017 will be guaranteed at least $7 million in his first contract. At the moment, there are 14 running backs in the entire league who make that much in guaranteed money.

So you could argue that a running back drafted in the first round Thursday would be among the 15 highest-paid players at his position before he steps onto an NFL field. Why is that? It's not a flaw of the rookie scale as much as it is a financial devaluing of the position.

To be clear, running backs have remained integral parts of NFL offenses during the league's shift to passing-focused schemes. In 2016, for example, they handled more than half of the total offensive touches and were responsible for about 20 percent of the receiving yards.

But the relative wear on their bodies is undeniable. Below is an analysis that many NFL teams use in some form to project future production and thus contract offers. A running back's best season is at age 26, and by age 29, his average rushing totals have dropped by more than 25 percent. For comparison, consider that the average production of receivers is nearly the same at age 31 as it is at age 26. NFL teams pay for future production, not past achievement.

Average running back output by age 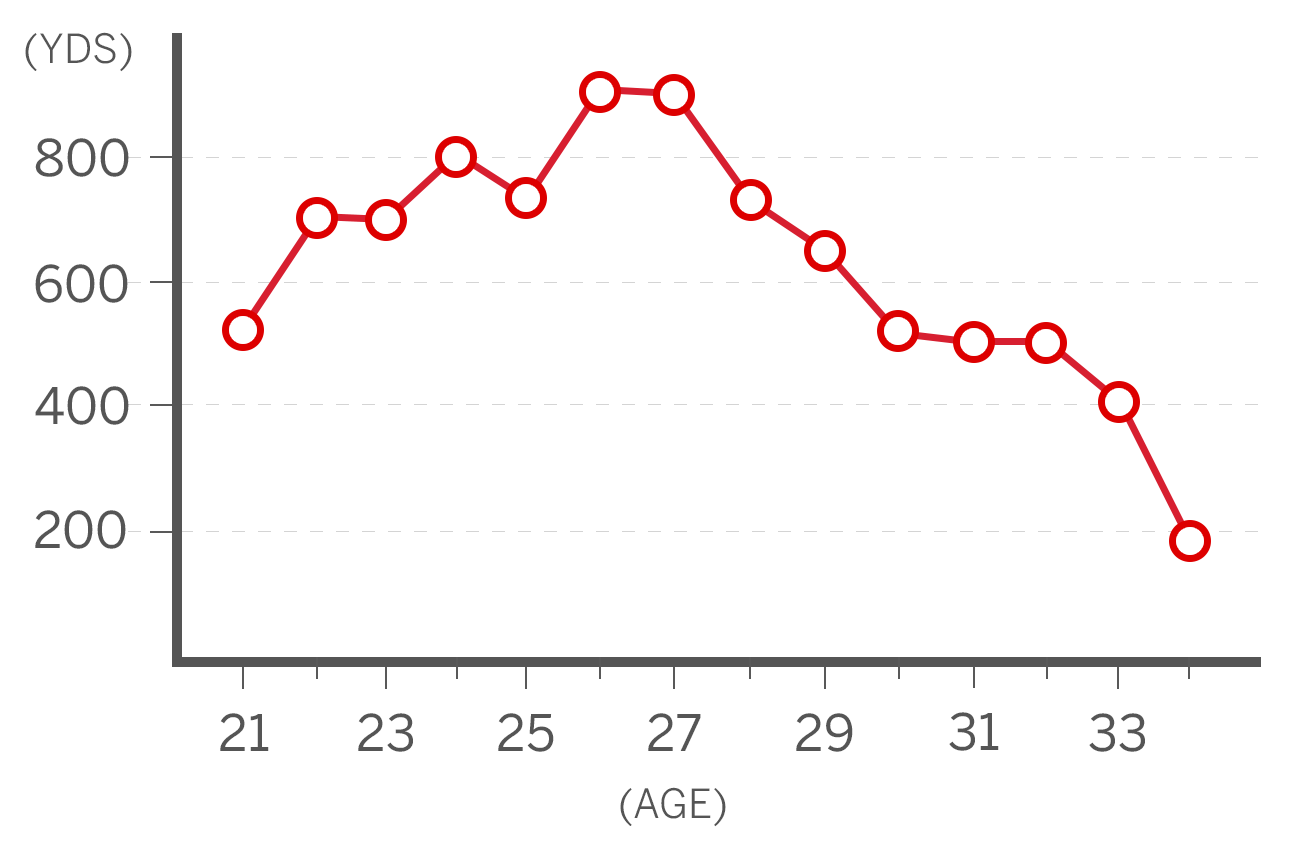 That's why teams see so much value in younger running backs. Their salaries are fixed by the rookie pay scale at the most productive time of their careers. This year, decision-makers will take the analysis a step further. Is it worth the additional cost of drafting a running back in the first round when there will be good, productive running backs available later in the draft who will be due far less in guarantees?

Go no further than the top of the list of NFL rushing leaders last season for a tangible representation of that debate. Elliott led the league with 1,631 rushing yards. Next was the Chicago Bears' Jordan Howard, a fellow rookie who rushed for 1,313 yards. A fifth-round pick in 2016, Howard was guaranteed $248,204 in his rookie deal. Few would deny that Elliott is the superior player, but was he $24.7 million more valuable than Howard?

Recent history suggests it's quite possible to draft a running back with almost the same production potential in the second round as it is in the first. Below is a comparison using Pro Football Reference's Approximate Value metric, which measures each player based on his relation to the statistical average at his position.

Running backs drafted in the past five years

This debate is especially pronounced in a year like 2017, when there are so many running backs in the pipeline. Scouts Inc. gave five of them -- Fournette, McCaffrey, Cook, Tennessee's Alvin Kamara and Oklahoma's Joe Mixon -- grades of 80 or higher. That's the most since 2008, when eight running backs received a grade of at least 80 and five were drafted in the first round.

Running backs drafted in 2008 -- including Chris Johnson, Jamaal Charles, Jonathan Stewart and Ray Rice -- have rushed for a total of 69,105 yards and 404 touchdowns, the most by any class since the draft went to seven rounds in 1994. The chart below gives you a sense of the relative riches teams will be sifting through Thursday night. 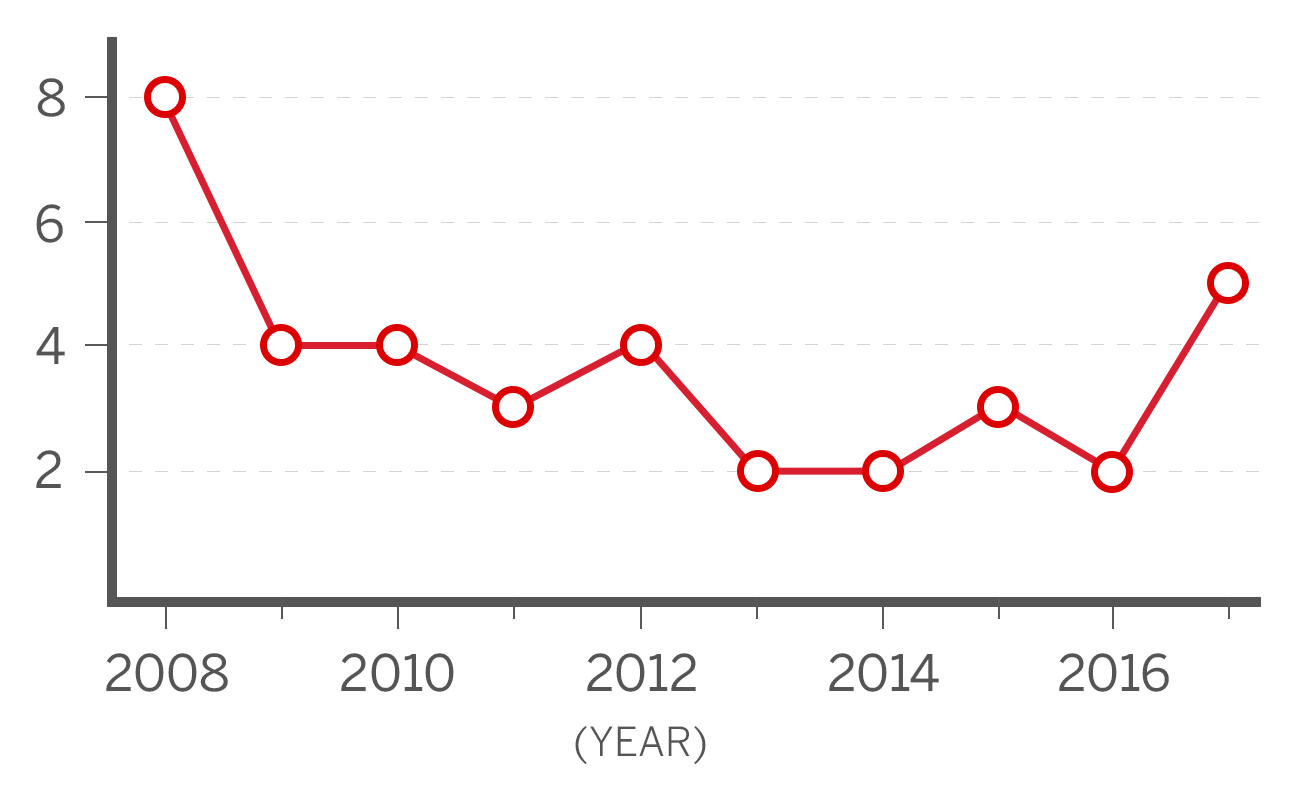 So what to make of all this?

There is nothing inherently wrong with drafting a running back in the first round, but that player must be a unique and well-rounded player who isn't simply a rushing machine. Elliott, for example, supplemented his rushing total with 313 receiving yards and respectable pass-blocking as well.

A team drafting a running back in the first round must project him to be one of the best players at his position in the league, because we know one thing for sure: He's going to be paid like it.