All the storylines fit when you look at the raw numbers. Alex Smith is having the best start to his career, and one of the best three weeks in the NFL, after the Kansas City Chiefs began the process of replacing him. With first-round draft pick Patrick Mahomes II sitting on the bench, Smith has transformed into the aggressive gunslinger that no one thought he wanted to be.

One caveat: He hasn't.

The disparity between Smith's traditional passer rating and his total quarterback rating illustrates the help he has received from teammates in what remains a highly conservative passing offense. This is not to say Smith has played poorly. The Chiefs' attack is best viewed as the most efficient Alex Smith offense imaginable, rather than something new.

Let's take a closer look as the Chiefs prepare for Monday night's matchup against the Washington Redskins, utilizing research from Micah Adams and Jacob Nitzberg of ESPN Stats & Information. 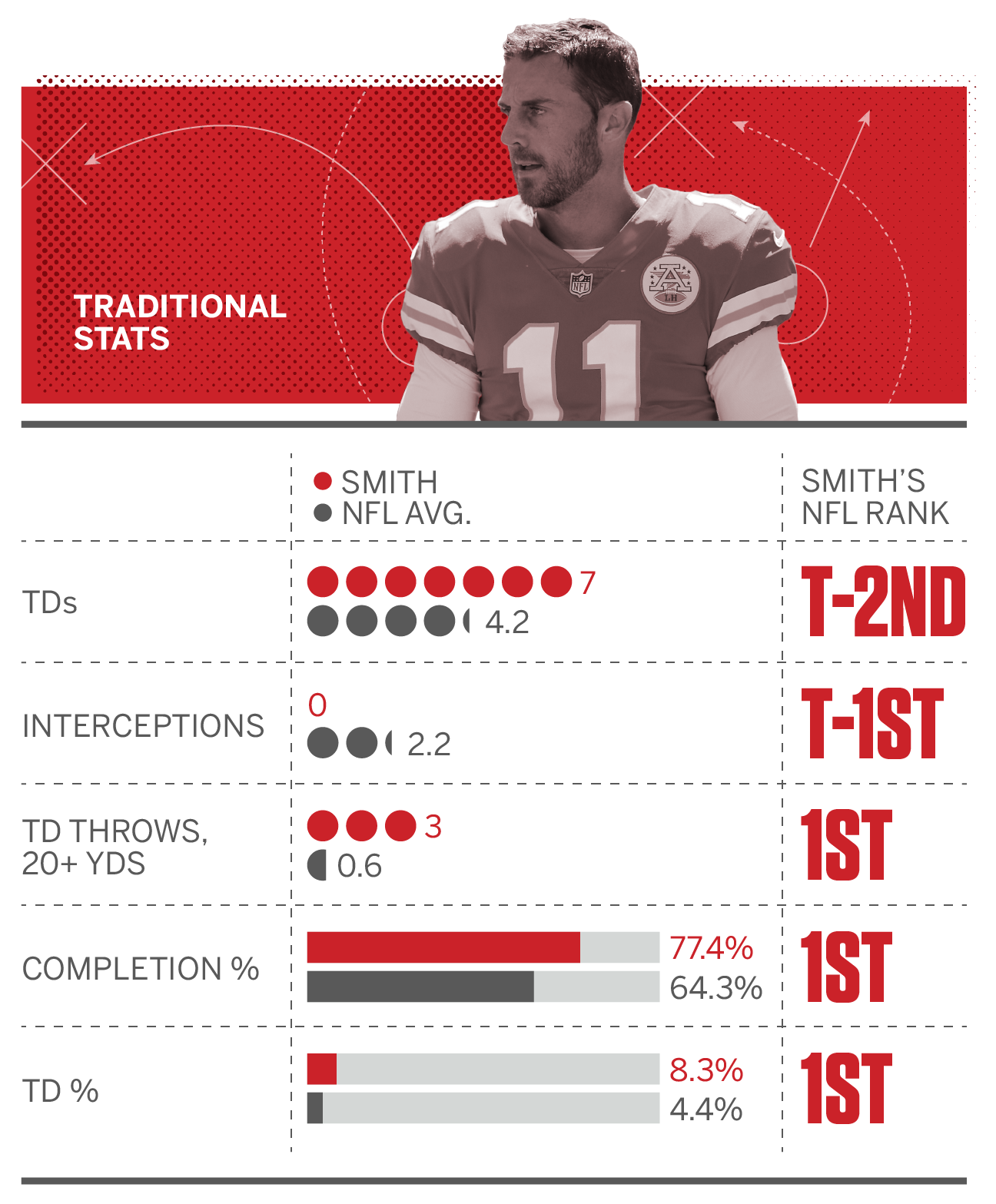 Without a doubt, the Chiefs' passing offense has put up some big numbers. Entering Week 4, Smith was completing an absurd percentage of his throws -- more than 10 percentage points higher than the New England Patriots' Tom Brady, for example. No quarterback was throwing touchdown passes at a higher rate per attempt than Smith, and none had more big-play scoring throws.

Those figures have ballooned Smith's passer rating, a figure based on completion percentage, yards, touchdown passes and interceptions. (His 774 yards ranked No. 10 in the league.) But as you can see below, his NFL-leading passer rating stands in contradiction to his QBR, which attempts to incorporate more context about a quarterback's performance. 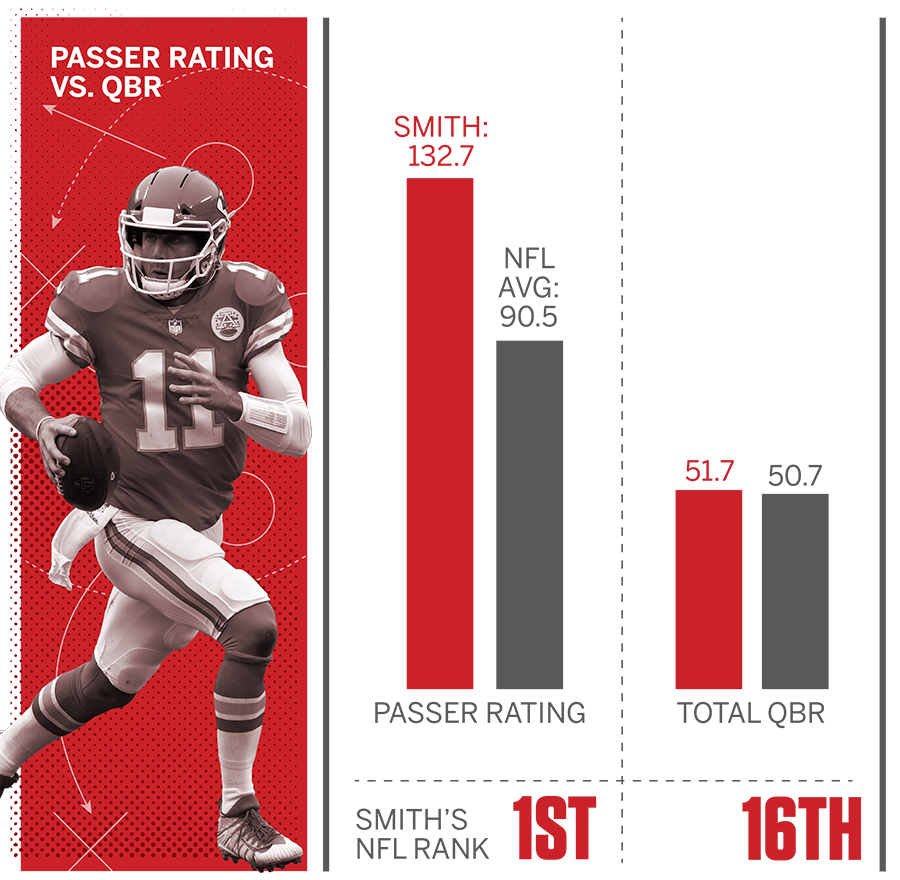 In this case, QBR paints a more complete picture of Smith's season.

Most importantly, we see that Chiefs pass-catchers are turning relatively safe and conservative passes into bigger chunks of yardage. The Chiefs averaged the NFL's highest yardage total after the catch, per completion, and had not dropped a single pass through the first three weeks of the season, based on ESPN Stats & Information video analysis. (Last season, the Chiefs dropped a higher percentage of passes -- 5.0 percent -- than all but six teams.)

On the other hand, an average Smith pass is traveling 5.81 yards in the air past the line of scrimmage -- lower than 26 other NFL quarterbacks. That's even less than the 6.24 air yards per throw he has averaged since joining the Chiefs in 2013, the lowest among qualified quarterbacks over that span.

Also pulling down Smith's QBR has been his high sack rate per dropback, the worst in the NFL, and his struggles to convert first downs on third-down throws. 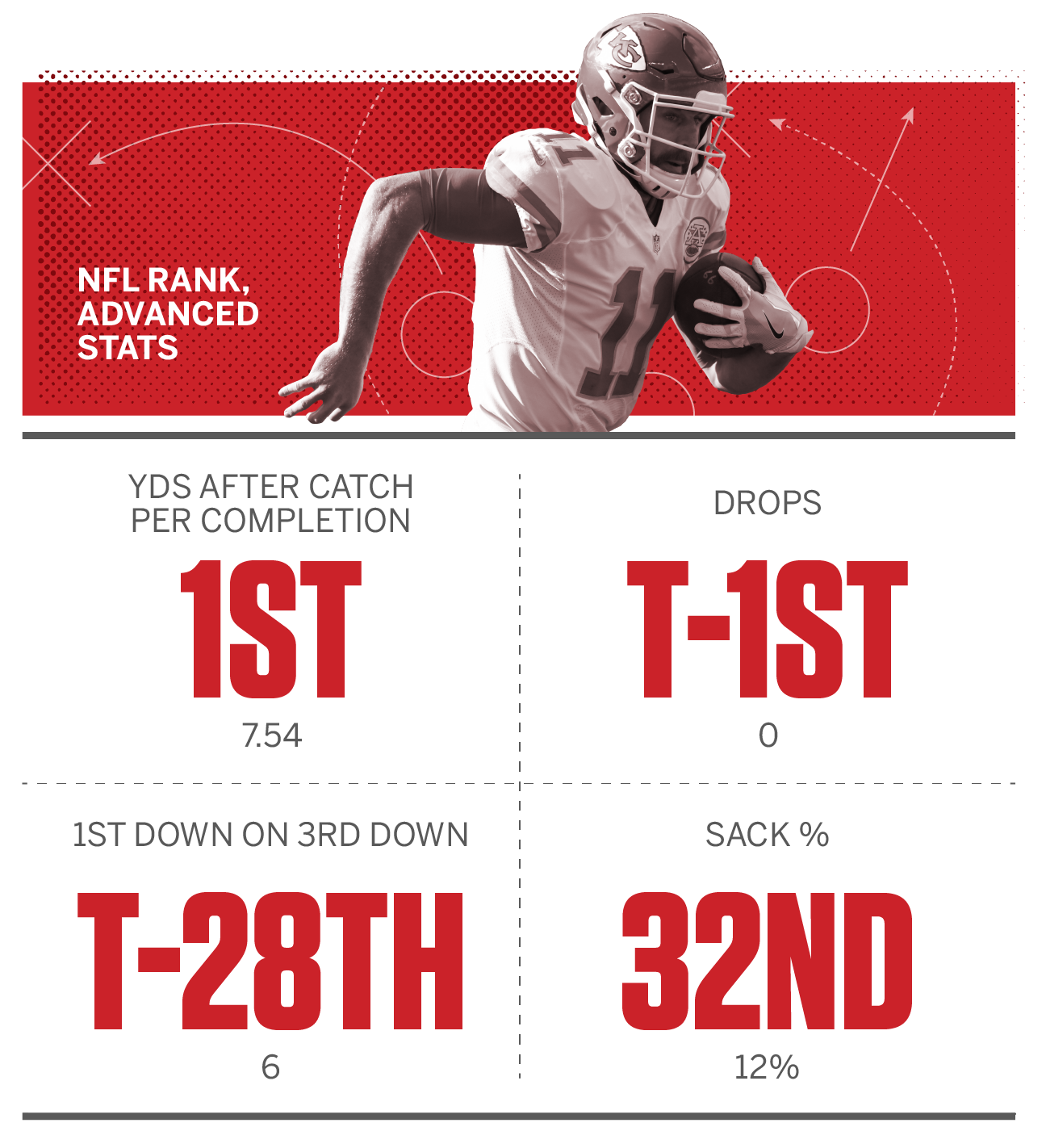 Indeed, the Chiefs' success hasn't been the result of a new Alex Smith. If anything, it's Alex Smith turned up to 11.

As the next graphic shows, more than one out of every three passes Smith has thrown this season didn't make it past the line of scrimmage. These are the highest-percentage throws in football. They are the easiest to complete, the most difficult to force a turnover on and the type of pass that puts the maximum responsibility on the receiver to make it a positive gain. 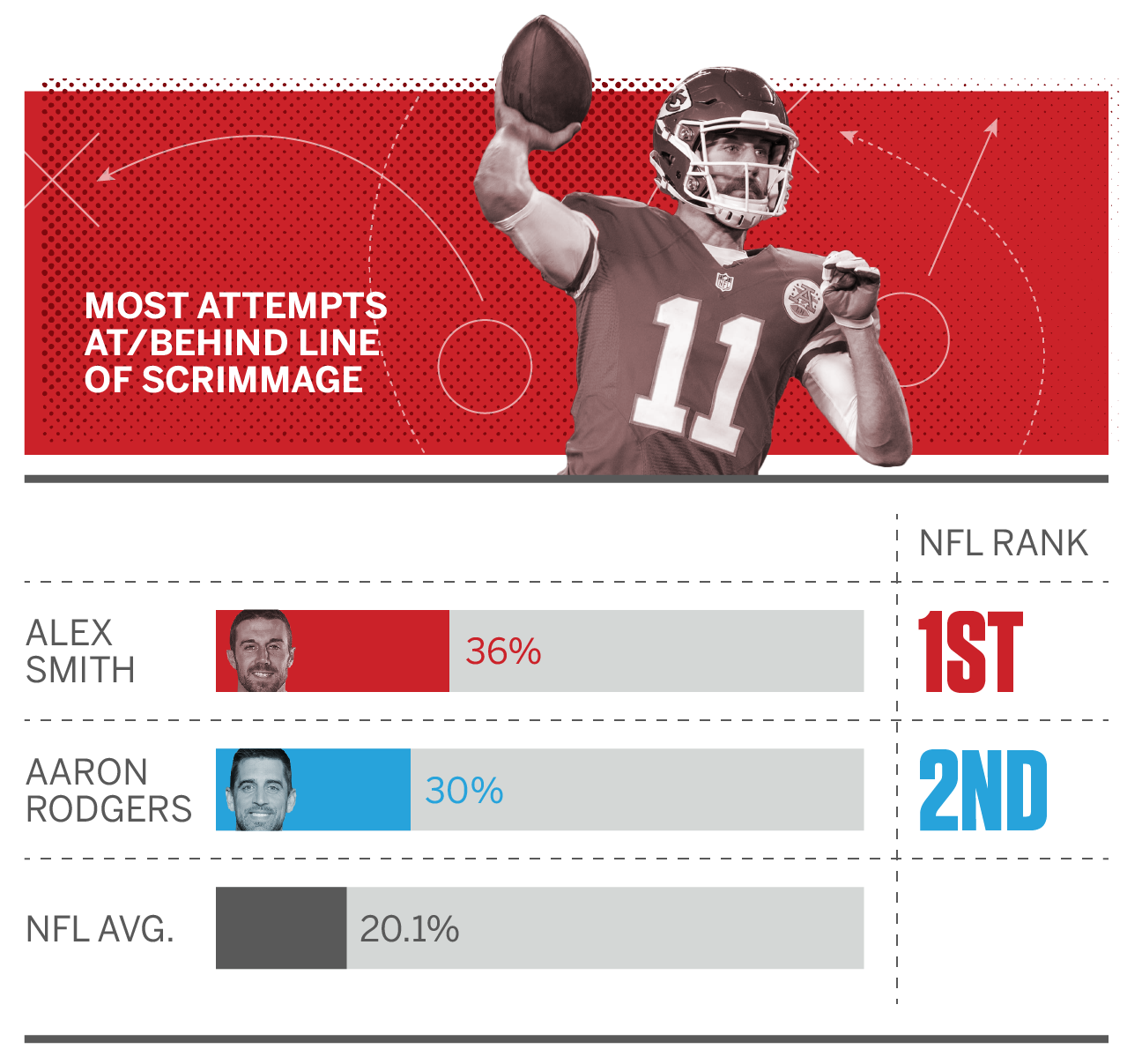 This is nothing new for Smith. Since 2013, he has led the NFL in percentage of throws at or behind the line of scrimmage (28.2).

As a result, it should not be surprising that Smith had thrown the NFL's fewest passes, by percentage, that travel more than five yards beyond the line of scrimmage -- and it's not even close. About 37 percent of his throws are extending beyond that five-yard mark. The next-lowest percentage was produced by the Oakland Raiders' Derek Carr (43 percent), and the NFL average is 56 percent.

None of this is to take away from the net result of the Chiefs' performance. These numbers simply give us a better understanding of how it has happened, who (else) deserves the credit and the extent to which Smith has remained consistent to his career approach.