The Deshaun Watson rookie campaign was remarkable -- and ultimately way too short.

A year ago, the Houston Texans' offense was plodding along under quarterback Brock Osweiler, who was the 29th-rated passer and couldn't seem to complete much beyond 5-yard passes to tight ends. But Watson flipped the script and turned the Texans into must-see TV with a rookie quarterback season like we've never seen.

But with news Thursday that Watson suffered a torn ACL, the talk of what is still possible in a record-setting rookie season is over. We have an end point in the Watson rookie experience, and it has been a remarkable ride.

When it comes to the impact we can measure, Watson was off the charts from a historical perspective. Here's a look at the numbers behind Watson's historic start -- and what could have been.

Watson replaced an ineffective Tom Savage at halftime of the Texans' season opener, a 29-7 loss to the Jaguars. That was followed by a quiet statistical game against the Bengals in Week 2, but he did lead the Texans to their first win. Since then he has thrown 18 touchdown passes in his past five games, including five against the Kansas City Chiefs in a 42-34 loss on Oct. 8. The main benefactors have been DeAndre Hopkins and Will Fuller V, who share the NFL lead with seven touchdown catches apiece. Hopkins topped his 2016 season total of four by Week 5 and his 224 receiving yards in Week 8 against the Seahawks is a single-game high in the NFL. Fuller has just 13 catches on the season with seven going for TDs -- and he missed the first four games of the season with a broken collarbone. "We all make each other better," Hopkins said earlier this season. "[Watson] getting the ball where it needs to be. Just getting the ball to his playmakers. He makes the whole team better, not just me."

Setting the pace for all QBs

Watson's start wasn't just good for a rookie -- he's leading the NFL in three major categories, including rushing yards. That kind of versatility has been fun for the Texans' coaching staff to utilize. "Having a guy with athleticism as well as somebody who can stand in the pocket [and] throw the ball down the field, somebody who's an intelligent player, instinctive player, certainly kind of opens things up for you, no question," quarterbacks coach Sean Ryan said. 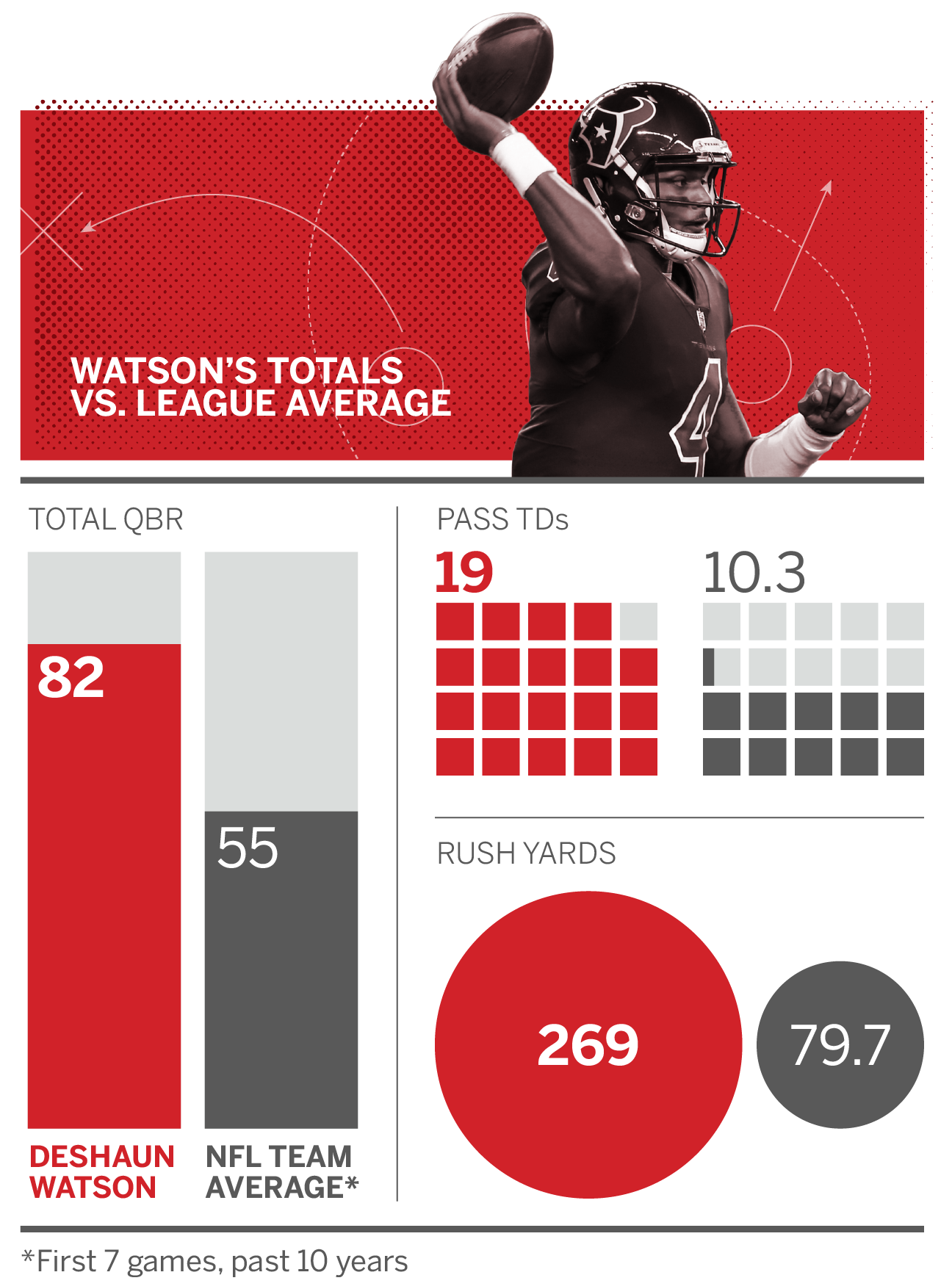 Where Watson was at his best

Watson, who is the first rookie quarterback to win AFC Offensive Player of the Month, thrived operating out of play-action, especially from Week 3 on, during which he has passed for 18 touchdowns and the Texans have averaged 30.7 points a game. O'Brien is learning weekly what the rookie can do. "He's got some pretty good insight, even though he's a young player," O'Brien said. "So, I don't think it's so much that he suggests plays, it's more about the plays that are -- you know, maybe there's four or five plays in the game that he has a suggestion about tweaking a little bit during the week, and it's usually a good one, which is pretty interesting. That's usually the case with really good players. They know what they're talking about." 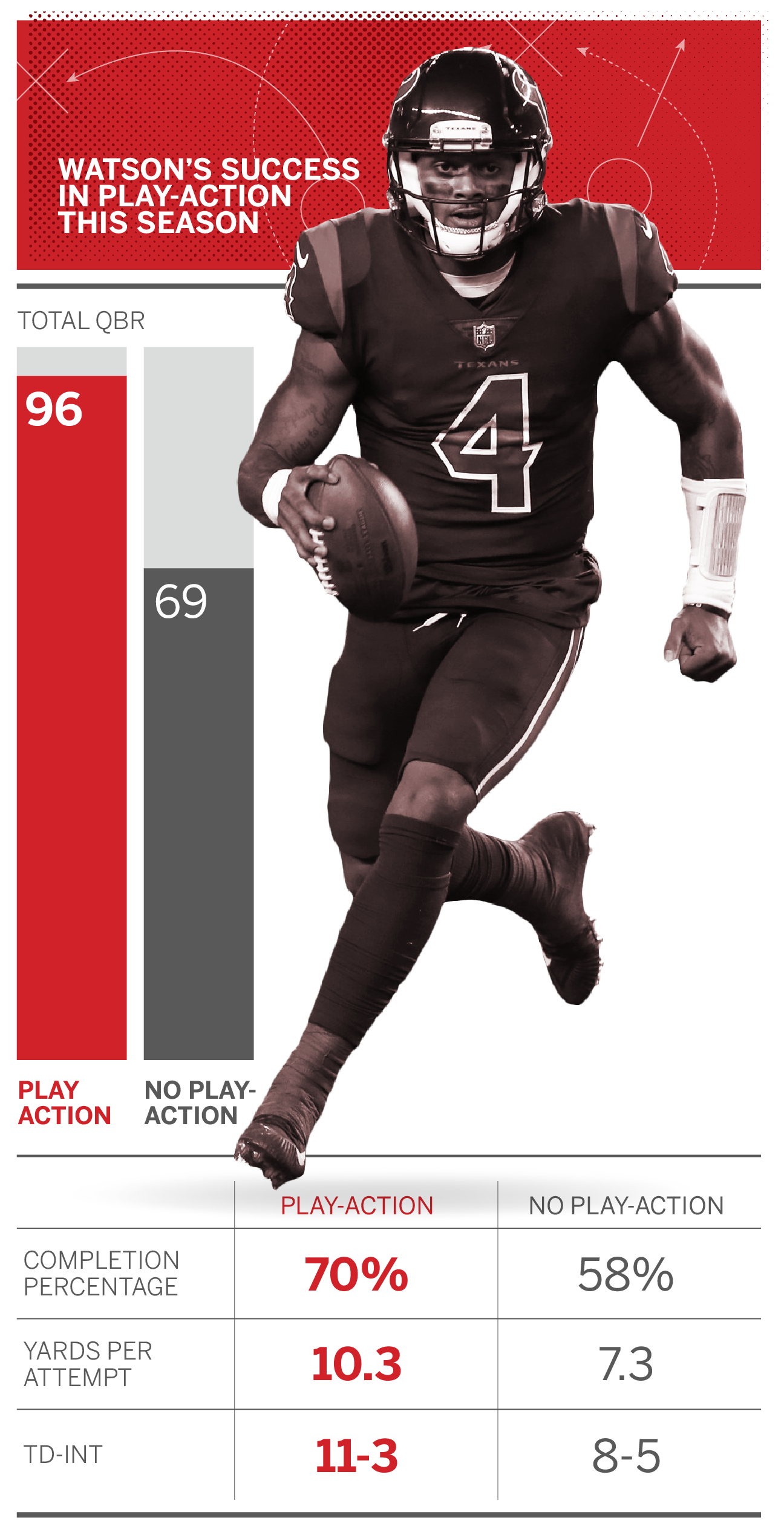 What they're saying about Watson

"My God, Houston's so lucky. By next year he's going to be a top-five quarterback in this league, and that includes the two big dogs [Tom Brady and Aaron Rodgers]. He makes you dig to the deepest part of your competitive juices to beat him."

"Deshaun Watson is special. I mean go ahead and give him Rookie of the Year, he is a great player. I love watching him."

So why weren't the Texans winning?

Houston enters Sunday's game against the Colts 3-4, and 3-3 in Watson starts. For all the excitement Watson generated, NFL FPI gave the Texans a 31 percent chance of making the playoffs before he was injured. One of the big reasons is the play of their defense. The Texans have scored 30-plus points a league-high five times this season, but they've gone 2-3 in those games. They went 36-3 when scoring 30-plus points from 2002 to '16.

The Texans have allowed 26.9 points per game this season, 29th in the NFL. That's almost 6.5 points more per game than they allowed last season (20.5). But much of that is because of injuries and offseason losses in free agency from the top-ranked defense in the NFL last season.