A version of this story appears in ESPN The Magazine's Feb. 5 State of the Black Athlete issue. Subscribe today!

Who has the edge when Tom Brady's Patriots face Nick Foles and the upstart Eagles? We break down the matchup by the numbers.

Who comes out on top?

The Pats are No. 1 overall thanks to their offense -- first in points (27.94) and yards (394.2) per game. The Eagles, meanwhile, allowed the fewest rushing ypg (79.2) and had the third-best opponent QBR (44.6). But according to ESPN's efficiency metric,* the biggest mismatch is the Eagles' O vs. the Pats' D -- especially if QB Nick Foles can repeat his stellar NFC championship performance. 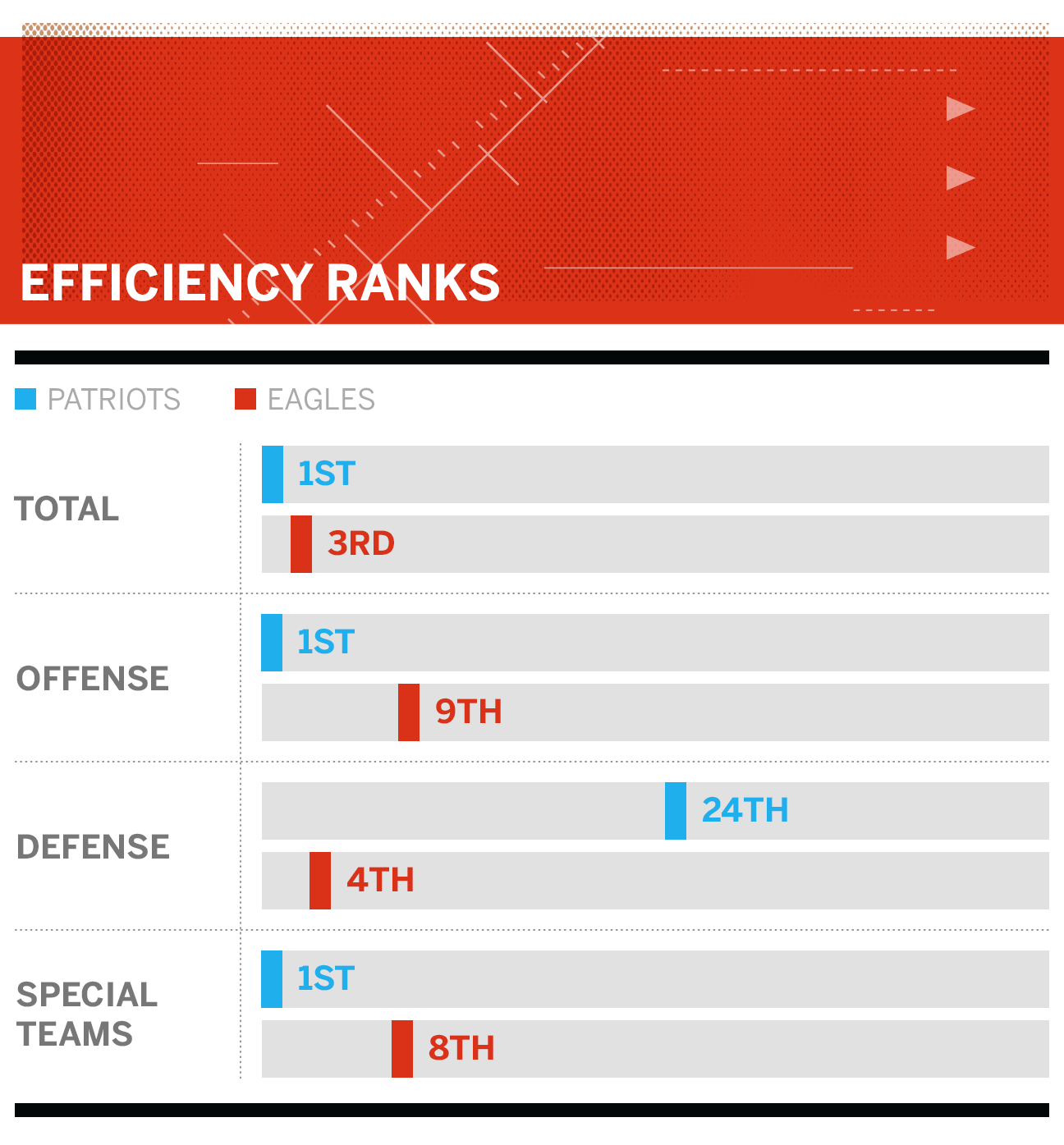 This is 40 -- for Tom Brady anyway. Brady led the NFL in attempts (581) and passing yards (4,577), completing more than 66 percent of his passes. Eagles fans, meanwhile, will be hoping for a repeat performance of Foles' NFC Championship game, where he threw for two TDs of 40+ yards. The Patriots are vulnerable on deep throws: They gave up the second-most yards per play and fourth-most per game. But aside from that superb championship game, so is Foles -- an abysmal 0.7 QBR on his regular season passes of more than 20 yards.

Brady and Foles combined for 31 yards rushing this regular season. That means that they'll have to attack pressure from the pocket, where Brady is known for his ability to deftly slide away from the rush to create his own throwing lanes. But against Brady, teams create that rush, mostly, with their front four; Brady gets blitzed on just 23.6 percent of his drop-backs (38th out of 44 quarterbacks who attempted at least 100 passes). That's likely because of a stellar QBR when pressure that ranks only behind Minnesota's Case Keenum and Brady's former backup, Jimmy Garoppolo, who appeared in just six games. What about Foles? His QBR is 32nd -- and yards per play 42nd -- when the heat is on. The Patriots, tied for seventh in the NFL with 42 sacks, figure to do their part to squeeze Foles, who has yet to throw an INT this postseason. 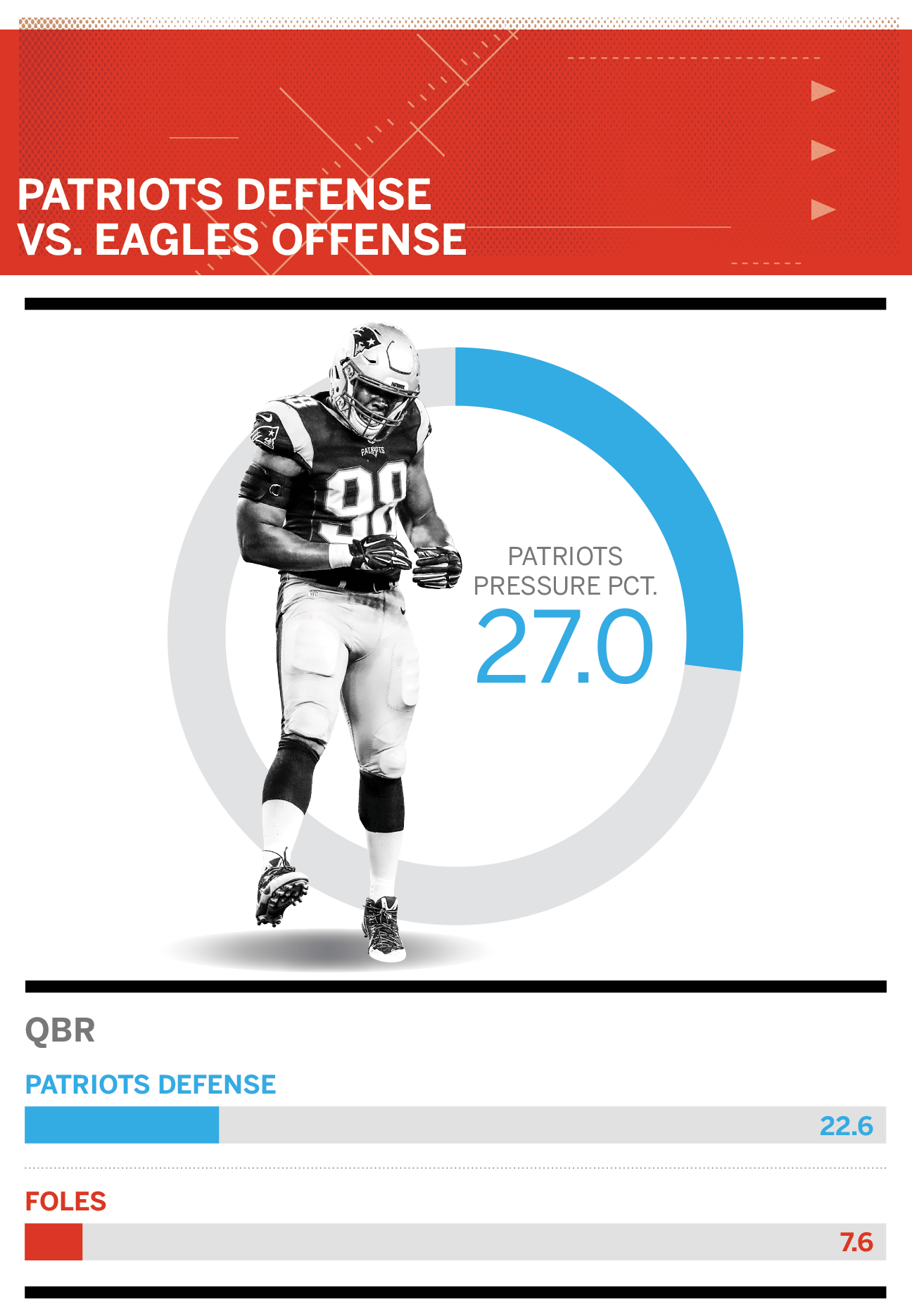 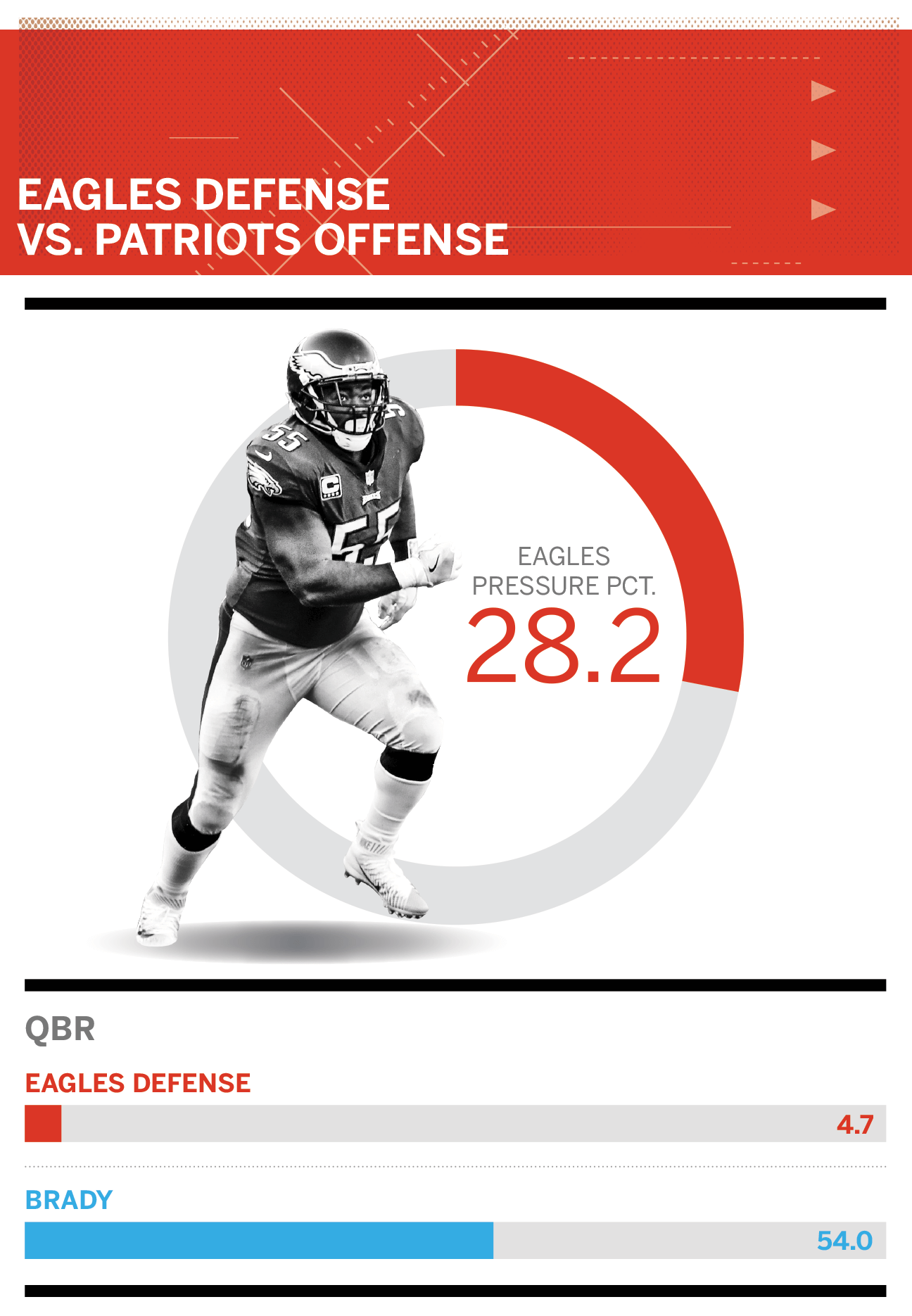 The Patriots, who famously use a committee in the backfield, had three players with at least five rushing touchdowns. But Dion Lewis began getting more carries in October and finished as the team leader in rushing TDs (six) and yards (896) with an impressive 5.0 yards per carry. Brady's running backs had a league-best nine TD catches this year. Watch out for them against the Eagles: Philly's D allowed opposing RBs to score five TDs on receptions, tied for second most in the NFL. Foles, meanwhile, will lean on RBs Jay Ajayi and LeGarrette Blount against a D that allowed 4.71 yards per rush, second most in the NFL. Ajayi, who ran for more than 1,000 yards with the Dolphins last year, was traded to Philly in October and had an impressive 5.8 yards per carry while sharing the workload with Blount. 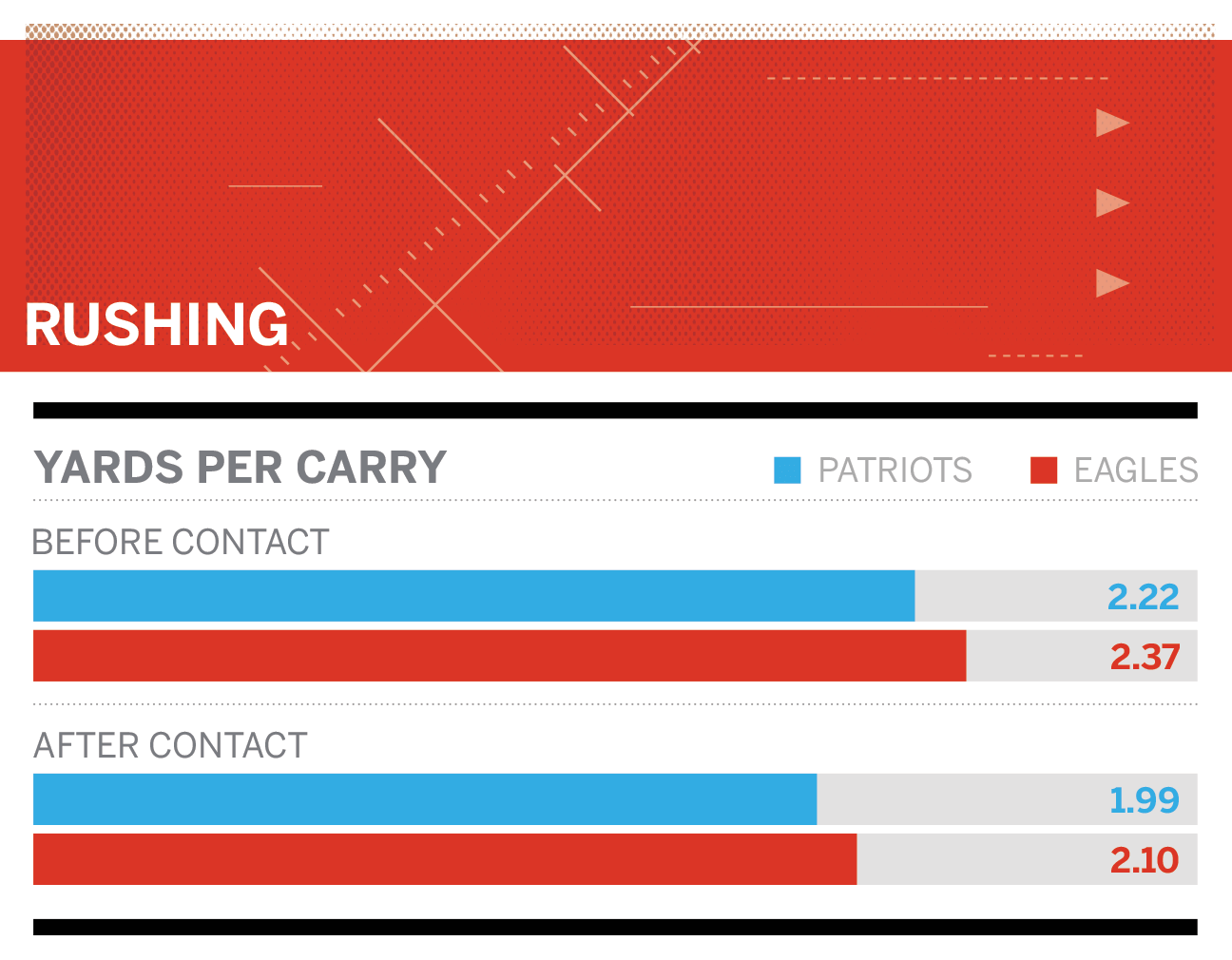 With WR Brandin Cooks and TE Rob Gronkowski (currently out of practice after his concussion in Sunday's game) drawing attention, Lewis is dangerous when he gets into space-he had five TDs (three rushing, two receiving) in the last three games of the regular season. The Pro Bowler Jenkins (76 tackles and 2 INTs) is the Eagles' best chance to slow Lewis down ... or try to. 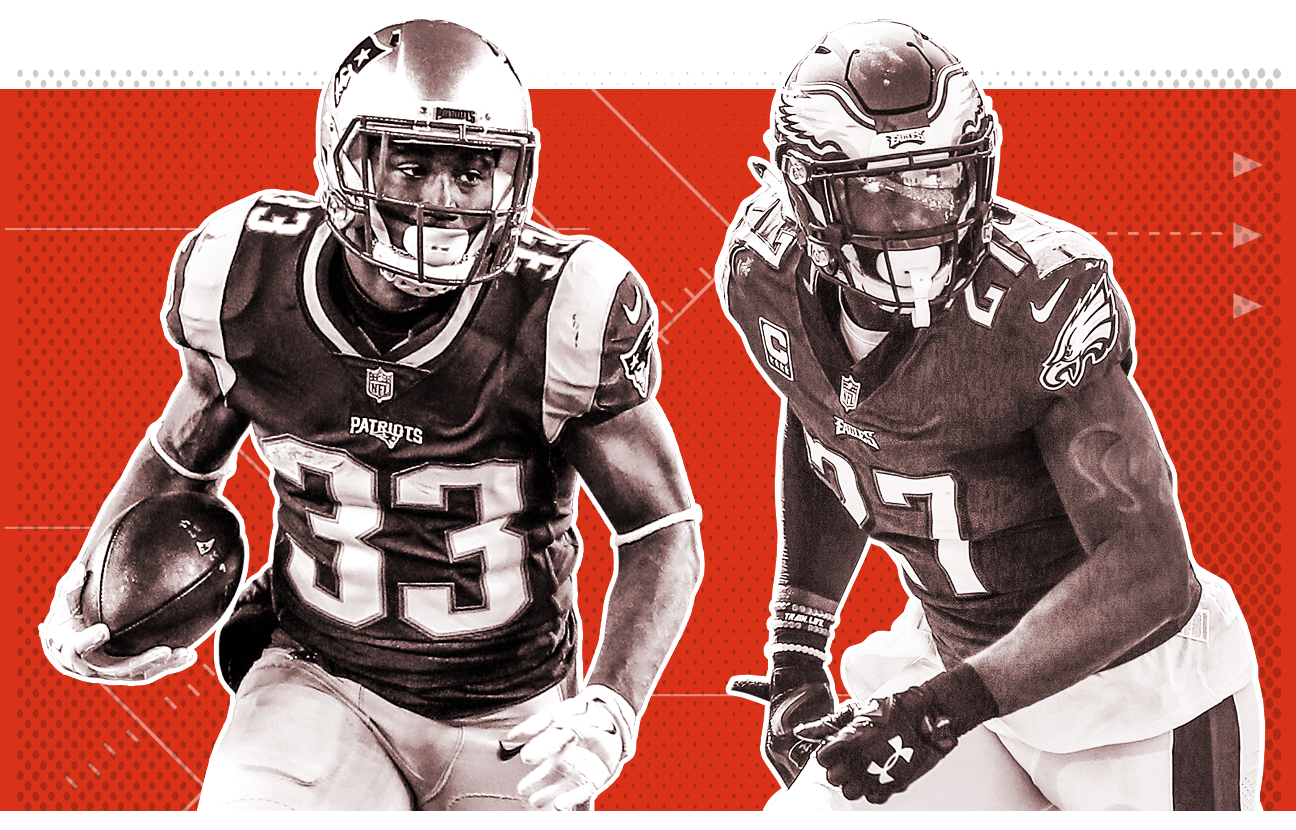 We've all seen the Internet memes that suggest Belichick and Brady have the refs in their pockets. But alas -- data! Believe it or not, Pats haters, two NFL teams are flagged less than New England (but, yes, the Pats are still the third-least penalized team). Philly, meanwhile, is the NFL's 14th-most penalized squad. 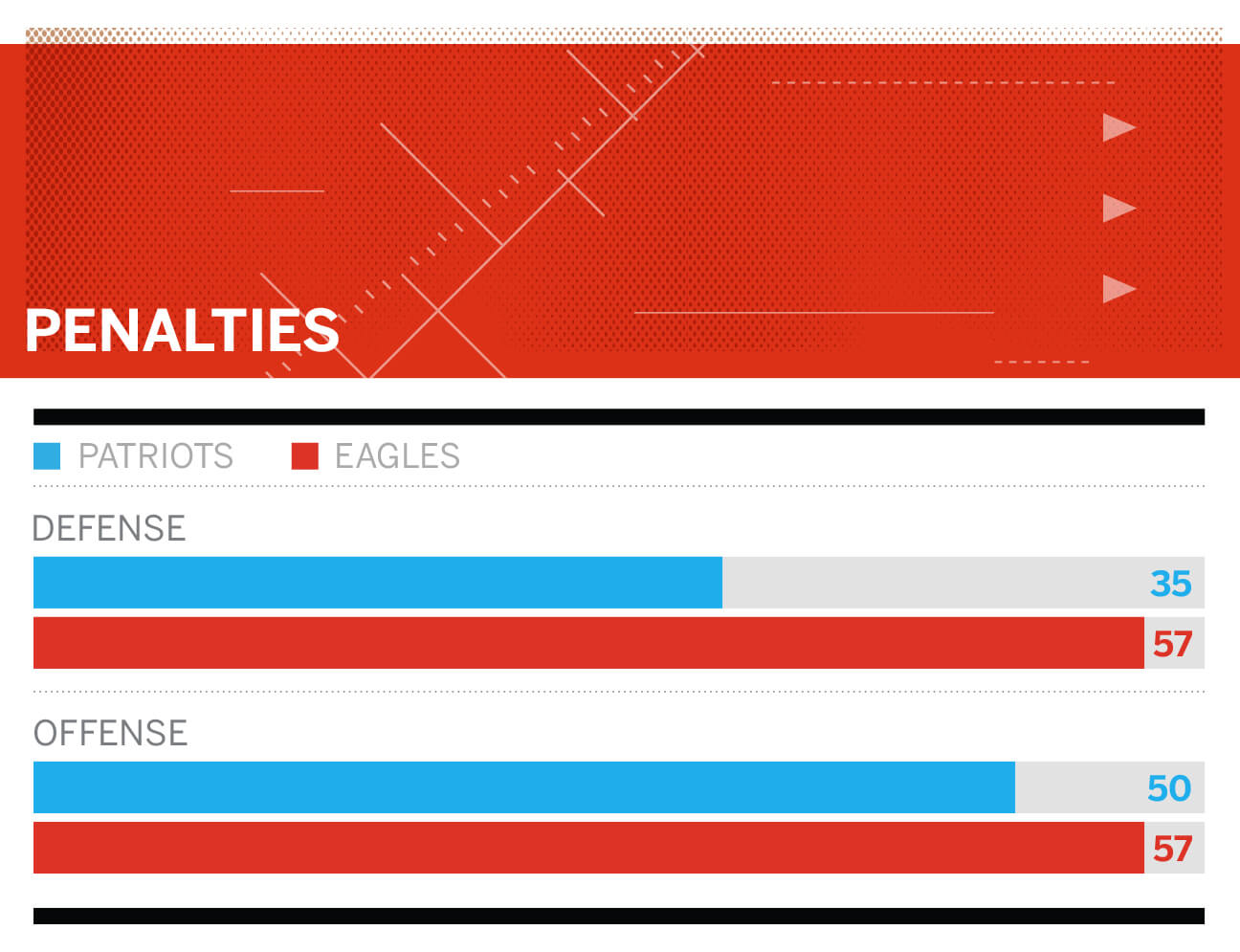 Brady's INT total was his highest since 2014 ... and he still didn't scratch double digits. His eight picks were 11th lowest among qualified QBs. But one note of worry for the Eagles: In Foles' seven regular-season games (just three of them starts), he recorded two interceptions and two lost fumbles.

The Patriots have long had one of the best special teams units in the NFL, and that includes the 12-year veteran Stephen Gostkowski, who did not miss a field goal under 40 yards this regular season (and has done so just three times total in the last five campaigns). By contrast, the Eagles rely on rookie Jake Elliott, a fifth-round pick in 2017, who took over in September after a season-ending injury to Caleb Sturgis. Elliott missed five field goals in his 15 games. 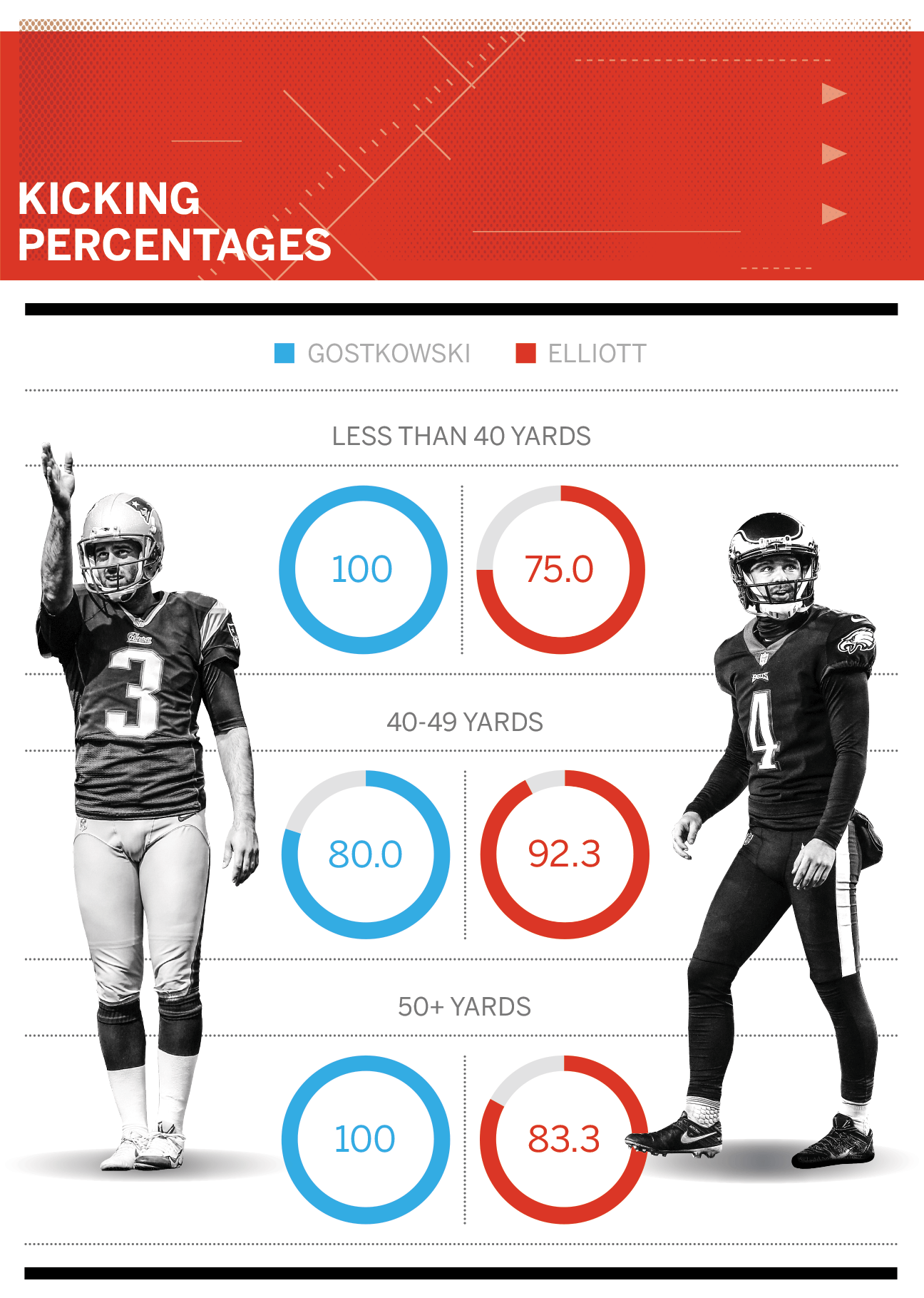 The road to the Super Bowl

The Patriots were convincingly thrashed by the Chiefs in the season opener but lost just twice more, by one score each time. By season's end, they finished tied for first in point differential with, you guessed it, the Eagles. Philly's 10-1 start fueled a franchise-record-tying 13 wins on the back of fallen QB Carson Wentz. 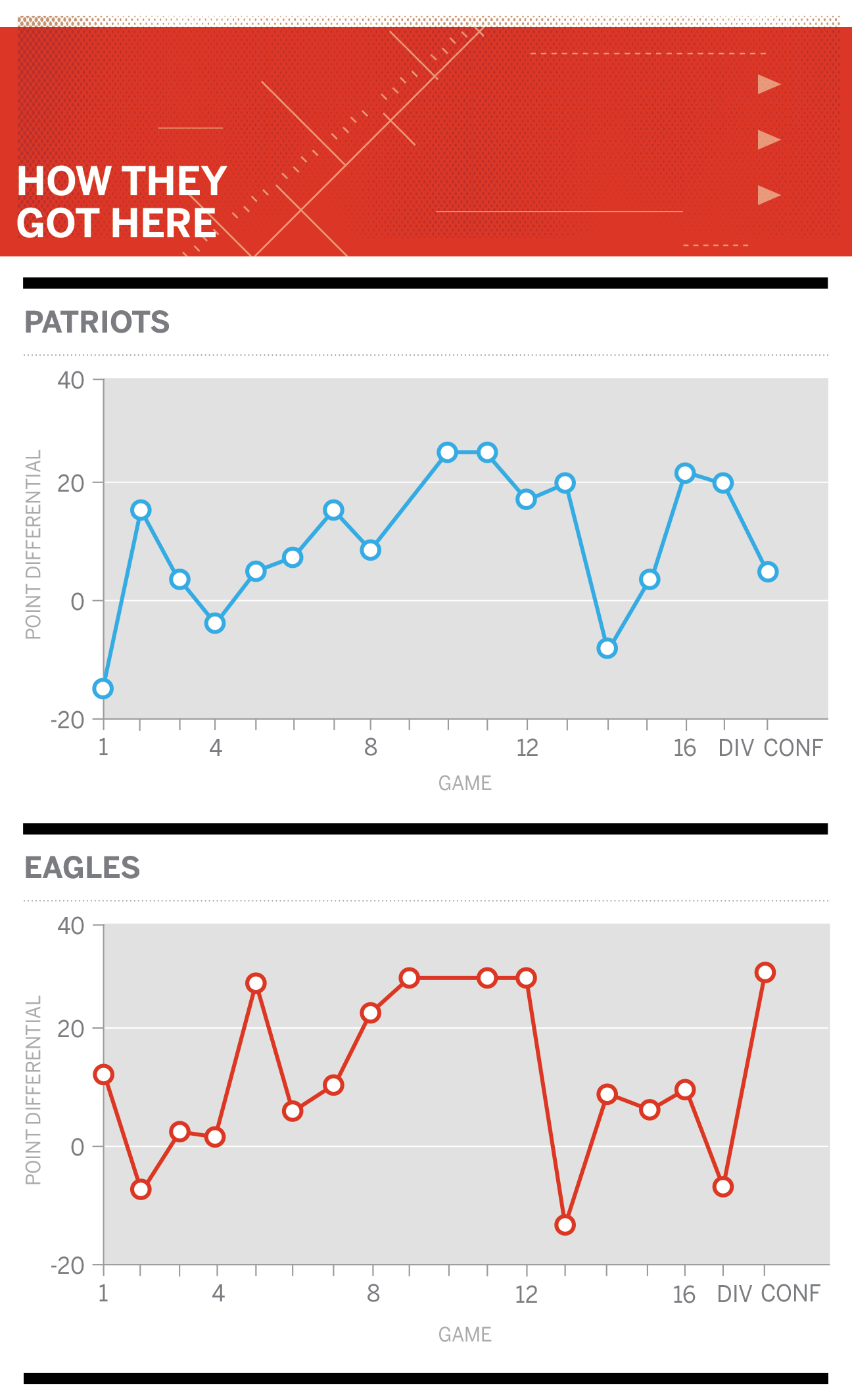 Tom Brady vs. Nick Foles. Advantage: Patriots. You didn't need ESPN's Football Power Index (FPI) for that one, even after Foles' killer performance against the Vikings. Philly's No. 4 scoring defense is stout but, in his three starts for injured MVP candidate Carson Wentz, Foles had the league's worst QBR (7.6) when pressured. How's Brady under pressure? Google Super Bowl LI.