Christian Scotland-Williamson almost redefines the term rookie. The 6-foot-9, 266-pound Englishman used to play rugby union for Worcester, but is now part of the Pittsburgh Steelers squad through the NFL's International Pathway programme.

Not even a degree in economics and a master's in business could prepare him for the mind-boggling details that awaited him at camp. He used to learn 30 to 40 different 'play' calls ahead of each rugby match for the Worcester Warriors.

"I think we have installed 600 or 700 plays by now," Scotland-Williamson tells ESPN of his time with the Steelers. "That puts it into perspective and anything can be called at any time.

"In rugby you don't have nearly as much detail to learn because it's not an intermittent game, there aren't the same number of stops and starts so you can't script as much. Obviously being a second-row [in rugby] and a lineout caller [equivalent to a middle linebacker, in rugby terms], I was used to calling a menu and running off a script of sorts, but the depth of the playbook is another level."

Even Nate Ebner, the New England Patriots special-teamer who starred for the United States in rugby sevens at the Rio 2016 Olympics, cites the playbook as the biggest difference between the sports and the biggest hurdle in adapting to the NFL. And Ebner is an American, steeped in the traditions and cultures of American football from a young age.

There is hope for Scotland-Williamson, however. The NFL International Pathway -- a venture created to give athletes with transferable skills a shot in the league -- guarantees him a space on the practice squad throughout the 2018 season, though no prospect at all of seeing the field in a game. He is not the first rugby player to try out, either. Alex Gray, the former England Sevens captain, spent last season on the Atlanta Falcons practice squad and has now been awarded a reserve future contract at tight end for the coming season. But with just 1.6 percent of college football players earning a full-time NFL deal, let alone those coming from outside the sport, Scotland-Williamson knows the odds.

One step at a time! OTAs ✅ #KeepPushing

It has been a whirlwind few months for Scotland-Williamson. After a video of him tackling a Wasps player while on Worcester duty went viral, he caught the eye of those from the NFL scene, was encouraged to push for a spot on the Pathway and was invited to their 12-week camp at the IMG Academy, Florida. He was there from January through March, went back to the UK, and then in April travelled back over for the draft. He was picked up by the Steelers and will be their 11th man on the practise squad this season.

He finished up at Steelers minicamp last week, honing his skill set at tight end. Next will come training camp next month. Had he opted to stay in rugby union, he would just be preparing to head back to preseason at Worcester. He was always a second-row with promise, he had all the physical attributes, but had a bad run of injuries. Sport runs in his family. His father, Guy, was an amateur boxer, his brother Alexander is a former Division I college basketball scholar from University of Alabama and his cousin Zane is a professional golfer. His journey into professional rugby was part luck; he was playing university rugby at Loughborough, Worcester were short of players for a second-team match, he was called up late and earned a professional contract.

"We brought him down, he walked in the building and he was a colossus of a man," says Mark Hewitt, who was Worcester Warriors academy manager when Scotland-Williamson was sent his way. "We liked what we saw of him. We gave him an opportunity and that was purely on his athletic ability, rather than his rugby skill set. It was lucky he fell in our lap but it was a massive punt.

"He's an incredibly intelligent young man, very coachable and he fit in really well. He's a person who goes into a gym, looks at a weight and increases his mass in a short period of time. He's explosive in defence, around the edges and fringes, and his ability to generate power is incredible. Everyone knows 'that' tackle, but he had the ability to do that all the time."

"That tackle," as it turned out, was to change Scotland-Williamson's life and lead him towards the NFL. There have been other trailblazers, but they are a rare breed. The aforementioned Gray is on the next stage of the path into the league while Hayden Smith played top-level rugby with Saracens and for the New York Jets at tight end in 2012. It was a learning curve for Smith, too.

"Initially the thing which hit me was the different language. It takes time to learn it so you can relate to what people are talking about," he says. "It's different to anything you've ever come across. The second thing which took time was understanding the nuances of the game and how it comes together. It's a three-dimensional game, as opposed to rugby where defenders are usually in front of you.

"There are elements to football that come naturally, with the running, spatial awareness and good hands. But it's hard to say with a blanket rule of what different athletes will struggle with in the transition. I originally found blocking difficult. It was nuanced and it took time to learn the footwork. It's not what you expect on the surface: like scrummaging in rugby, blocking takes years to perfect."

From Rugby To The NFL 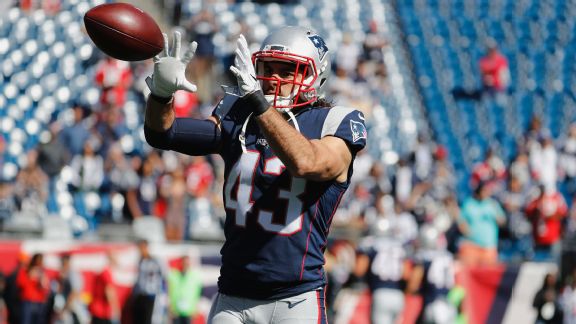 The Patriots' Nate Ebner has been the most successful athlete to jump from rugby to the NFL, but he's not the only one who tried. Here are a few others and how they fared, according to ESPN Stats & Info:

Jarryd Hayne, RB, San Francisco 49ers, 2015 He was signed as an undrafted free agent after playing for the Fijian and Australian national rugby league teams. After rushing for 175 yards on 15 carries in the preseason, he rushed 17 times for 52 yards and caught six passes for 27 yards during the regular season. He also played for Fiji's Sevens rugby team after leaving the NFL.

Hayden Smith, TE, New York Jets, 2012 He was signed as an undrafted free agent after playing for the United States national rugby team. He had one catch for 16 yards. He also played for the Saracens club in England.

Some other notable rugby players who played in the NFL, but also played college football:

David Dixon, OL, Minnesota Vikings, 1994-2004 He played rugby and football at Arizona State and started 134 games for the Vikings, mostly at right guard.

Colin Scotts, DT, St. Louis Cardinals, 1987 He was offered a football scholarship by Hawaii while playing for an Australian Schoolboys team on a tour. He had two sacks in seven games.

Paul Lasike, FB, Chicago Bears, 2016 He played football and rugby at BYU after growing up in Australia. He rushed three times for eight yards in 10 games, including three starts for the Bears. He played primarily on special teams.

Ebner, DB, New England Patriots, 2012-present He was a second-team All-Pro in 2016. He played rugby and football at Ohio State and was drafted by the Patriots in the sixth round in 2012. He represented the U.S. at the 2016 Rio Games.

Scotland-Williamson has been learning from the best. His sprint coach in Florida was 2004 Olympic long jump gold-medalist Dwight Phillips and he has also worked with Earnest Byner, who won Super Bowls with the Washington Redskins and Baltimore Ravens. He has picked Michael Bennett's brain while a guest at the Pro Bowl, and is studying Rob Gronkowski and Jimmy Graham. He has also taken up some Filipino martial arts. But it is up to him to force his way into the Steelers' consciousness until it becomes second nature. "Football is a simple game," says Steelers tight ends coach James Daniel to ESPN. "It's just adjusting to the rules in football. He's [Scotland-Williamson] just worked hard at what we've asked him to do and [where to] get better."

The 12-week IMG camp in Florida was hard work, but the minicamp is just as intense. "It's been a real eye-opener as when people watch on a Sunday, they might not think much goes into it," Scotland-Williamson says. "But it's a full-time occupation. The past five weeks have been up at 5:30 a.m. and in the facility for 6 a.m. and you read the playbook until you go to sleep, so it's been all-consuming."

He has spent time after training working with the ball -- he is thrown 200 or so passes a day -- as he adjusts to not only the different size, but also catching in all manner of contortionist positions where in rugby it was usually passed in front of him. He has work to do there, according to James Daniel. "Yeah, he needs to improve," Daniel tells ESPN. "You watch practice, you can see he needs to improve catching the football."

And then there's learning the nuances of blocking, with a 6-inch gap between feet instead of the 12 in rugby. "You can be the biggest man on earth but it won't get you anywhere if you don't have the technique. People at this level are so skillful so it's about finding my technique and then using my raw power and size," Scotland-Williamson says. He has changed his training, putting on 10 pounds in five weeks back in January's camp, but he still feels like the same man.

"I wouldn't say my body has changed too much, it's more trying to work on explosive movements rather than the long, medium-paced runs you do in rugby, so everything's more explosive, with sprints and aggressive changes of direction. That's taken some getting used to in your hamstrings, groin and back just because it's a different type of training."

He is loving the experience. The camaraderie in the changing rooms is similar -- less sarcastic than the UK rugby counterpart -- and he has spent time focusing on and embracing the mental challenges of the game. "There's a lot of competition -- you either rise to the occasion or you let people get in your head as there's a lot of trash talking which shrinks your game. There's a lot of energy in the environment."

It is a promising start, but he knows full well there is no room for complacency or guarantees. Daniel's assessment of Scotland-Williamson's progress is to the point: "He's OK." These are tentative days for the rugby-NFL path. According to Smith, the risks still outweigh the rewards so a torrent of rugby players won't be following any time soon. But should Scotland-Williamson succeed, the perception will change. One step -- or perfected play -- at a time, though.