Age has nothing on Jerry Rice. Last August, 13 years after retiring from the NFL, the GOAT receiver -- who's still the league's all-time leader in receptions (1,549), receiving yards (22,895) and touchdown catches (197) -- showed up to 49ers practice and proved he still had wheels. Now, at 55, he's using the Body Issue to prove he's still got the muscles to match. Hallie Grossman caught up with Rice to talk about the hard work required to outrun time. 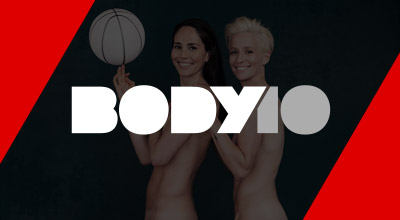 I think I'm more muscular now than when I played football. I'm working hard on it. So many athletes just let themselves go after they stop competing. That was something I didn't want to do.

When it comes to training, I change it up a lot because I don't want the body to get used to a certain thing. That's really what CrossFit brings to the game. There are so many exercises you can do. And as long as you can mix everything up, and you don't do the same thing over and over, your body is not going to adjust and your body is going to continue to burn the rest of the day.

A lot of people don't focus on getting their heart rate up. About 30 minutes into a run or something like that, their heart rate is just getting up. Now they're like, "OK, I'm done." So they're not going to burn as much. But I can get my heart rate up real fast and do a lot of kettlebells, do a lot of box jumps, do a lot of wall balls, just stuff like that. Burpees. You would be amazed what that can do to you because you work an area of muscle in your body to jump down, get back up, something very similar to what we did in football.

The only thing I look back on is how I performed in the fourth quarter. A lot of players are tired in the fourth quarter, and they can't fight through that pain. But I had sacrificed so much during the offseason in the way I trained, I could endure that and still focus on what I had to accomplish. I think it was because of my conditioning.

During the offseason, I didn't take any time off. And I played this game for over 20 years. So right after the season, I would go right back into my regimen. We had this hill that was about 21/2 miles up and 21/2 down, and it was very challenging. ... The last 800 meters is straight uphill. So you've got to think about this -- you're exhausted, but you have another 800 meters to go, and it's straight uphill. It's going to push you to all limits. But that pain got me ready for the fourth quarter. I think that's the reason why I did my best work during the fourth quarter. It's because of the hill, that last 800 meters.

For me, staying athletic and taking care of my body started a long time ago, when I was a sophomore in high school. I just started running. In Mississippi, it was like 100 degrees out. I would go out and run 5 miles. And my mom asked, "Son, why are you running out here in this hot weather?" And I told my mom, "I don't know, but I'm doing this for some reason."

Playing football was my destiny. This is how I started playing: I was playing hooky one day, and the coach and the principal walked up behind me. They scared me and I ran, and they noticed I could run really fast. They wanted me to come out for the football team. So I went out for the team, and I was not the most gifted athlete. But I just felt, if it was something that I worked at, maybe I could become a starter. And I started to work, and I became a starter. And then I went off to Mississippi Valley State. Then I got drafted to the NFL. At that time when I was running my sophomore year in high school, I didn't know the reason why I was running, but that was my destiny.

I don't diet. I'll eat fish, I'll eat baked chicken, pasta, beans. When the body is telling you, "You need to indulge in something," you need to give the body what it wants. If that's some ice cream or a candy bar or some type of dessert, I'll just go ahead and indulge. After that I get right back on my regimen.

When I look in the mirror, I can say that I know there's room for improvement. As long as there's room for improvement, you're going to keep pushing yourself. But I'm always looking. I want to trim down a little bit more in my waist. I want to get a little bit bigger on top. But overall I want everything to balance out. I don't want to have a big body, small waist and skinny legs. That just doesn't send a good picture for me. I try to balance everything out. Today was all about upper body. Tomorrow will be about lower body. Stuff like that.

I went out and I practiced with the [49ers] football team last year. The young guys could not believe that after playing a game for 20 years, and being out of the game for 15 years or something, my body knew what to do -- that I could run routes, that I could catch the ball, that I can beat them off the line of scrimmage and do all those things. I think that really impressed them. But because I never got out of shape, my body just knew what to do the second I put on those football shoes.

I still feel like today, if I wanted to come back to football and play football, I could do it, at the age of 55. I'm one of those guys that I still believe that if I wanted to, I could come back, catch over 80 balls and really be productive on the field. ... I think I'm still explosive, and I think I still can beat up on some defenses.