Our panel of ESPN NFL Insiders is looking ahead this week, identifying teams and players poised to dominate over the next few years. They'll answer a question every day.

Friday's question: Who will be the consensus No. 1 pick in fantasy drafts in three years?

Monday: Which rookie QB is in the best spot for long-term success?

Tuesday: Which NFL team is best set up for multiple Super Bowl runs?

Wednesday: Who will be the NFL's best defender in 2021?

Thursday: How many games will the Browns win over the next three seasons?

Matt Bowen, NFL writer: Giants RB Saquon Barkley. Barkley's versatility puts him at the top of the list. Think high-volume touches with the receiving skills to expose linebackers in coverage and the 4.4 speed to rip off big plays on the ground. Barkley's game is a great fit for today's NFL offenses where the running back is utilized as matchup piece in the game plan.

Mike Clay, NFL writer: Rams RB Todd Gurley. He will be entering his seventh NFL season at age 27 and presumably will still be the feature back in a high-scoring Sean McVay offense that helps open running lanes for its backs with heavy reliance on three-wide sets. Workhorse running backs are rare and seemingly fading away, but it's hard to imagine Gurley as anything other than an every-down touch hog for the next five years or so.

Mina Kimes, senior writer: Barkley. Running backs' careers are so short these days that you have to go with the youngest star available. There's no way of knowing at this point whether Barkley will thrive in New York, but given where he was drafted (and the team's uncertain future at quarterback), you know they'll move heaven and earth to make it work.

KC Joyner, NFL writer: Gurley. His elite rushing abilities are well-documented, but let's not forget that he averaged 14.3 yards per attempt on 26 screen passes last year and tallied 6.8 yards per attempt on 61 non-screen passes thrown his way. He's the type of back who can post low-tier starting WR-caliber numbers in the passing game to go along with elite ground production and will still have plenty of tread on his proverbial career tires at that point.

Field Yates, NFL Insider: Giants WR Odell Beckham Jr. I'm tempted to pick a running back, as a top-tier running back is the most valuable position in fantasy. But running backs are so hard to project multiple years out, though Dalvin Cook and Barkley both intrigued me. So let's go with Odell, already in the conversation for best receiver on the planet. His ceiling is, well, there is no ceiling.

What's your prediction for total number of Browns wins over the next three regular seasons?

Matt Bowen, NFL writer: Projecting the anticipated development of QB Baker Mayfield, and a Cleveland roster that features some young talent with real upside, the Browns could win 20-plus games over the next three seasons.

Mike Clay, NFL writer: If you ignore past records and focus only on current roster talent, the Browns are roughly an 8-8 team as is. Myles Garrett, Christian Kirksey, Duke Johnson Jr., Josh Gordon, Jarvis Landry, Kevin Zeitler and Joel Bitonio add some star power and the team is loaded with young, budding stars such as Baker Mayfield, David Njoku, Nick Chubb, Larry Ogunjobi, Denzel Ward and Jabrill Peppers. The future is bright as long as quarterback isn't a disaster.

Mike Sando, senior NFL writer: I'll go with 20 Browns victories over the next three seasons on the thinking Cleveland will approach .500 a couple of times, with a decent shot at exceeding .500 in one of those seasons. There is always the potential for disaster in Cleveland, however, and that is why I'm not pushing that number as high as some others might.

Aaron Schatz, editor-in-chief of Football Outsiders: There's a ton of good young talent there. It has taken longer than anyone would have wanted, but I'm a believer in the Cleveland process and a believer in Baker Mayfield. I'll say 24 wins: 6-10 this year, then 8-8, and then a 10-6 playoff run in 2020. The wild card is figuring out just how much Hue Jackson can be blamed for their underperformance the past two seasons; if he's a big part of the problem, he needs to be replaced for the Browns to fulfill their potential.

Matt Bowen, NFL writer: Jaguars CB Jalen Ramsey. Ramsey already has established himself as one of the league's rising stars. He's a lockdown coverage man with the physical skill set to challenge receivers at all three levels of the field. And I love the confidence he plays with. He's got some serious swag to his game.

Mina Kimes, senior writer: Ramsey. If you had said 2019, I would've gone with Aaron Donald, but he'll be 30 in 2021; Ramsey will be just 26 at the beginning of that season. Right now, his athleticism, technique and versatility have already vaulted him into the best corner conversation. 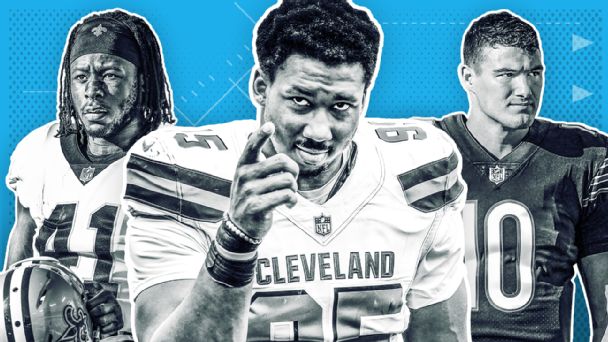 KC Joyner, NFL writer: Jaguars CB A.J. Bouye. Ramsey is touted as the best cornerback in the game, yet Bouye actually rated a bit higher than Ramsey in my 2017 cornerback coverage rankings chart and also led the Jaguars in interceptions. Bouye's 2018 wide receiver matchup slate is slightly more favorable than Ramsey's, so a repeat elite performance could be in line for Bouye this season.

Mike Sando, senior NFL writer: Chargers pass-rusher Joey Bosa, who is already among the very best and will be only 26 years old when the 2021 season begins. While opponents can sometimes neutralize a defensive back by avoiding him in coverage, it's tougher to hide from a player such as Bosa.

Aaron Schatz, editor-in-chief of Football Outsiders: Rams DT Aaron Donald. Yes, he'll be 30 in 2021, but some research we did for ESPN The Magazine about a decade ago suggested that defensive tackles tend to last longer than other positions, with the average tackle enjoying his prime through age 31. So Donald will still have plenty in the tank three years from now. What the Rams will be able to afford to put around him is an entirely different question.

Throw out the Eagles and Patriots. Which team is best set up for multiple Super Bowl runs?

Mike Clay, NFL writer: New Orleans Saints. Yes, Drew Brees is now 39 years old, but he's signed for two more seasons and could have a few additional years in the tank, especially after the team rebuilt its defense, allowing for a more balanced attack. Young stars and high-ceiling prospects such as Alvin Kamara, Michael Thomas, Sheldon Rankins, Cameron Jordan, Marcus Davenport, Marshon Lattimore and Marcus Williams -- along with a terrific offensive line -- help supply New Orleans with one of league's best teams on paper in both the short and long term.

KC Joyner, NFL writer: Los Angeles Rams. Jared Goff ranked tied for fifth in short pass YPA last year (7.0) and fifth in vertical YPA (12.6) last year. His numbers could get even better with the addition of Brandin Cooks, who placed second in vertical receiving yards last season. Combine that with a defensive line that added an impact player in Ndamukong Suh and a secondary that has two potential shutdown cornerbacks in Marcus Peters and Aqib Talib and it is a recipe for repeat Super Bowl contention.

Mike Sando, senior NFL writer: Los Angeles Chargers. The NFC is stacked with strong teams that could cannibalize one another in the coming years, so I'll take the Chargers. Philip Rivers is 36, which is no longer ancient by NFL quarterback standards. He could have a few good years left, and now he finally has a good team around him.

Aaron Schatz, editor-in-chief of Football Outsiders: Green Bay Packers. Offense is more consistent than defense, and nothing gives you a better chance of winning than having the best quarterback in the game. They'll need Aaron Rodgers to stay healthy and the young secondary talent to mature quickly.

Kevin Seifert, national NFL writer: Minnesota Vikings. The 2017 NFC runners-up have relatively young high-end players sprinkled on both sides of the ball, giving them arguably the most balanced roster in football. Most of them are signed through at least the 2020 season. That balance and security means the Vikings could absorb some injuries and still compete at a high level. Quarterback Kirk Cousins, who turns 30 in August, is signed for three years in the prime of his career, and coach Mike Zimmer is one of the NFL's top game-day schemers. The Vikings are as poised for long-term success as any team in the league.

Which rookie QB is best positioned for long-term success?

Matt Bowen, NFL writer: Baker Mayfield, Cleveland Browns. The No. 1 overall pick most likely will sit at the start of the 2018 season, but this is about long-term success. That's why I'm looking at how Mayfield's game meshes with today's progressive NFL offenses. He's an accurate thrower with a quick release and the intangibles needed to lead a pro team.

KC Joyner, NFL writer: Mason Rudolph, Pittsburgh Steelers. Unlike every other team that has one of the star rookie quarterbacks, the Steelers don't ask their field general to be a savior. They know how to surround their passer with top-flight skill position talent and know how to build strong offensive blocking walls. Rudolph also should have the luxury of time before he ends up taking over for Ben Roethlisberger.

Aaron Schatz, editor-in-chief of Football Outsiders: Lamar Jackson, Baltimore Ravens. I trust Baltimore's coaching staff more than I trust the other coaching staffs that were handed first-round quarterbacks this season. I also trust the Ravens to put a defense on the field that will keep Jackson from having to carry the team early in his career, and special teams that will constantly give him advantageous field position.