PHILADELPHIA -- Nick Foles is many things to many people -- a championship quarterback, a Super Bowl MVP, a feel-good underdog, and a best-selling author to boot. But his near future might be defined by one thing he most certainly is not:

Wentz is a thoroughbred, an athletic marvel already identified as LeBron James' favorite NFL player. Before he blew out his knee in December, Wentz appeared poised to carry the Philadelphia Eagles to the Super Bowl title they won instead with Foles, widely regarded as a one-trick pony who would remain in place, under center, only until Wentz was ready to go.

And Thursday night's 18-12 victory over Atlanta at Lincoln Financial Field did little to disabuse anyone of that notion. Foles won ugly -- really, really ugly -- completing 19 of 34 passes for a lousy 117 yards and no touchdown passes, carrying his disappointing preseason into the regular-season opener.

But Foles did win. He did survive the $150 million local boy, Matt Ryan, and this matchup between the team that should have beaten the New England Patriots in the Super Bowl and the team that did. In fact, even after Wentz gets the all clear from his doctors, Foles should continue to start for the Eagles until he proves he can no longer outscore the opposing quarterback on a regular basis.

Until, you know, he loses two out of three.

Assuming good health, Wentz is going to be an imposing force in the NFL; of this there is little doubt. Foles? He isn't much to look at, and he is the ultimate streak shooter. His highs are ridiculously high and his lows are ridiculously low, and at some point his physical limitations will make it obvious that the ball needs to be in Wentz's hands.

The Eagles should ride Foles all the way to that point. He has earned that much, anyway, after lighting up Minnesota in the NFC Championship Game before doing the same to the Patriots in Minneapolis, sending the sport's all-time coach (Bill Belichick) and quarterback (Tom Brady) spiraling into an offseason both would prefer to forget.

Philadelphia honored its Super Bowl LII conquest Thursday night with a weather-delayed pregame ceremony at the Linc, and with a hard jab at the Patriots during the third quarter, when Eagles coach Doug Pederson called for "Philly Philly," the fourth-and-goal trick play punctuated by Foles' touchdown catch against New England in the Super Bowl -- with a twist. This time around, Pederson didn't call for the snap to be sent directly to running back Corey Clement, but to Foles himself, who gave the ball to Clement before the running back pitched it to Nelson Agholor. The receiver threw a third-down strike to Foles near the sideline, effectively replicating the Super Bowl play New England ran when Danny Amendola threw to a wide-open Brady.

"That's where we got it from," Pederson said of getting the play from the Patriots.

With one difference, the Eagles coach said. "They were in 11 personnel [three wide receivers], and we were in 12 (two tight ends)."

Actually, make that two differences. Brady dropped the ball, and Foles did not.

"Honestly," Foles said of Pederson and the play, "we were both thinking the same thing at the same time. I went over there to talk to him to say this might be a good time, and he pointed to the call sheet and it was like, 'That was what I was coming over here for.' So it worked again.

"I love having plays like that. Our team loves it. I mean, everyone loves a good trick play."

At least the trick plays that work. Jay Ajayi scored the game's first touchdown at the end of that drive, then scored again in the final minutes before the Philly defense made the same kind of goal-line stop it made against Atlanta and Ryan to win its playoff game last winter. Truth is, the Eagles survived more than they advanced. They didn't gain a single offensive yard in the first quarter, the worst start for any NFL offense in a season opener in 13 years. Pederson said the game was decided by his offensive and defensive lines, but in reality, it was probably decided by the Eagles' resilience.

They're clearly better than the Falcons at closing out tight games like these, and Foles is a chief reason why. The backup quarterback and part-time receiver is 6-1 under Pederson. Foles became the first winning starter to throw at least 30 times with an average yards per attempt as low as his (3.44) since Josh McCown pulled it off for the 2005 Cardinals, according to ESPN Stats & Information.

But he caught a pass like he caught in the Super Bowl, a pass that Brady dropped, to give the lifeless Eagles a spark.

"I was just looking for a big play," Pederson said. "I just felt like it was the right time to make that call."

Pederson will know when it's the right time to make the call for Wentz, too. That will be a challenge among the many he will have to meet in his bid to make Philly the first repeat champion since the 2003-04 Patriots, who were led by a coach who was so moved by his 2001 team's failure to repeat that he wrote an op-ed piece in The New York Times about the burden of trying to go back to back. 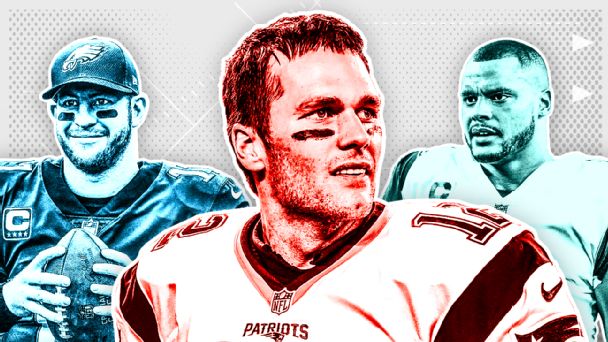 A panel of 50 NFL executives rated all 32 starters on a scale of 1 to 5. Where does your team's QB land?

• Name that QB: Match the quote to the player
• Execs evaluate future of 2018 first-rounders

"Remember," Belichick wrote to the next yet-to-be-determined Super Bowl champ, "the Smart Coach/Moron Coach Meter, which is currently way off the charts in the right direction, can be very moody."

Pederson will know when that meter is pointing toward using his franchise player. Foles will be looking like the guy who considered retirement in 2016, the Eagles will be losers of two of their past three, and Wentz will be acting light and confident on his feet.

But until that time comes, Pederson should give Foles a chance to see if there is a little opportunistic magic left in his right arm. There is no point in rushing the transition. Philly should stick with "Philly Philly," and with the best-selling author who might still have a chapter or two to write.