NEW ORLEANS -- Drew Brees became the NFL's all-time passing leader on Monday night, and he did it in spectacular fashion.

Brees broke Peyton Manning's record of 71,940 career passing yards with a 62-yard touchdown pass to rookie receiver Tre'Quan Smith in the second quarter of a 43-19 rout over the Washington Redskins.

Better yet, the New Orleans Saints' 39-year-old quarterback had one of the best performances of his 18-year career, completing 23 of 26 passes for 363 yards and three touchdowns. His completion percentage of 89.7 was a career best. And he did it in front of both the home crowd in the Mercedes-Benz Superdome and a Monday Night Football audience. 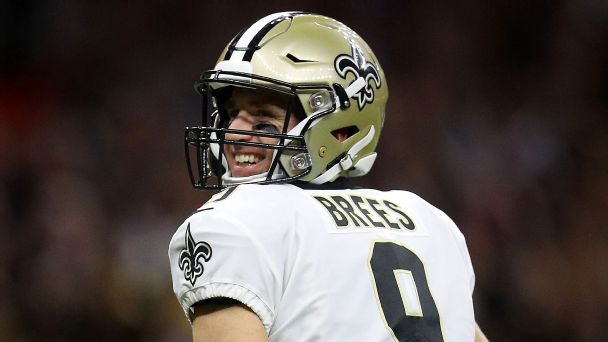 "It played out even greater than I ever could've imagined," said Brees, who added he had tried to rehearse the moment in his mind during the week -- but still got caught up in the emotion when the NFL stopped the game as planned to recognize his achievement. Brees hugged teammates on the field and pointed and blew kisses to the fans. Then he handed the ball to Pro Football Hall of Fame president David Baker on the sideline and shared hugs and kisses with his wife, Brittany, his four children and coach Sean Payton, among others.

"There's so many people that are responsible and had a hand in that," Brees told ESPN's Lisa Salters after the game when asked what the record means to him. "The two people that are most responsible for my football career, early on, my mom and my grandpa, are up in heaven.

"There were a lot of people I wanted to prove right tonight, but none more so than them. I know they are watching down on me."

Brees, who was mic'd up for the game, was captured on the sideline telling his kids right after the play, "You can accomplish anything in life you're willing to work for, right?"

His three sons also joined him in the postgame locker room and media conference.

Brees said he had 178 text messages and counting at that point.

"It's hard for me to reflect too much right now because my career's not done," Brees said. "There are still goals to be accomplished, there are still challenges to be met. So I'm still very focused on that. And yet when something like this happens, and there's so many people that are responsible for that, that can be a part of that, that makes me happy.

"It makes me proud, and it makes me extremely grateful for the opportunity to play this game and to have played it as long as I've been able to play it, to have wound up in New Orleans, which you all know that story. So it's just been an unbelievable journey and I'm just so grateful."

Manning also congratulated Brees with a video message that was both hilarious and heartfelt. He joked that he held the record for 1,000 days and they were the best 1,000 days of his life -- and "you've ruined that for me." Manning also held up a picture he and Brees took together in 2000 and said they've come a long way.

The play itself was the only part of the moment that went off script.

Smith wasn't actually the intended receiver on the play. But Payton credited Brees for making the "alert throw" after seeing how the defense reacted.

Smith said the Saints ran a similar play earlier in the game -- but the pass went to Cameron Meredith instead. Brees said it was a new play the Saints had come up with to flood a zone and "maybe someone pops open."

It was Smith's first career touchdown catch. But he said he is perfectly happy that he'll have to go to Canton, Ohio, to see the ball.

Brees, on the other hand, now has 499 TD passes -- fourth in NFL history and one behind Tom Brady.

Brees is the unlikeliest of all-time great quarterbacks -- just 6 feet tall, barely recruited out of high school, he fell to the San Diego Chargers in the second round of the NFL draft out of Purdue in 2001 and was doubted by most of the league when he became a free agent after a career-threatening shoulder injury in 2005.

But that's when he came to New Orleans and his career took off. Brees and Payton have formed one of the most prolific offensive duos in NFL history over the past 13 years -- including a Super Bowl victory after the 2009 season.

Brees also holds the NFL records for most career completions and highest completion percentage. He set the single-season passing yardage record in 2011 with 5,476 (before Manning passed him by one yard in 2013). And he has thrown for more than 5,000 yards five times over the past decade -- something no other quarterback has ever done more than once.

"He deserves it," Payton said. "An unbelievable run and it doesn't feel like it's been 12 or 13 years. It feels like it's been much shorter than that.

"I think the thing that's inspiring most is knowing what's most important to him and that common goal that we have relative to winning another championship. ... All the actual hardware, the different bats [to signify big games or moments], those all get dust. But it's about these memories right now. Someone like that, as special as that is tonight and what he's accomplished, that's what you miss when you're done."