The Kansas City Chiefs have released star running back Kareem Hunt, a decision that came after video surfaced earlier Friday that showed him shoving and kicking a woman in February.

The team announced the move Friday night. Minutes earlier, the NFL had announced that Hunt, 23, had been put on the commissioner's exempt list. 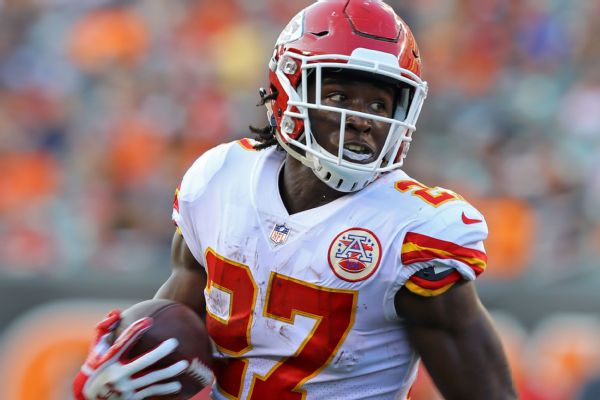 Lisa Salters will interview former Chiefs running back Kareem Hunt live on Sunday NFL Countdown. The show starts at 9 a.m. ET on ESPN, with the interview to air at 11.

"Earlier this year, we were made aware of an incident involving running back Kareem Hunt," the Chiefs said in a statement. "At that time, the National Football League and law enforcement initiated investigations into the issue. As part of our internal discussions with Kareem, several members of our management team spoke directly to him. Kareem was not truthful in those discussions. The video released today confirms that fact. We are releasing Kareem immediately."

In a statement, Hunt apologized for his actions, saying, "I deeply regret what I did. I hope to move on from this." The running back will be interviewed on ESPN's NFL Countdown at 11 a.m. ET on Sunday.

In the video published by TMZ earlier Friday, the running back is seen shoving and kicking a woman at a Cleveland hotel where Hunt had an apartment. The incident had been previously reported by multiple outlets, but Friday was the first time the video was publicized.

Hunt and the woman trade words in a hallway and are separated by several people on multiple occasions, the video shows. Hunt pushes the woman, who responds by hitting him in the face. Two men escort Hunt down a hallway before he charges out, colliding with a man who then knocks the woman over. Hunt also kicks the woman in the leg.

Police were called to the scene, but no arrests were made or charges filed.

Through body-cam footage obtained by TMZ, the woman and witnesses gave differing accounts of what escalated the incident. She told police that she wouldn't have sex with one of the men with Hunt, while one of the men said she called them the N-word after being asked to leave Hunt's hotel room.

TMZ reported that prosecutors had access to the surveillance video at Cleveland's The Metropolitan at the 9 hotel, and the hotel, in a statement to ABC News, said it was assisting in the investigation.

Even if another team does sign him, Hunt is on the commissioner's exempt list, meaning he can't play in or attend games until the investigation is over and a decision on potential discipline is made. He would not count against the team's 53-man roster.

Riddick on Hunt: 'These are choices people make'

Louis Riddick addresses the Chiefs releasing Kareem Hunt and being disappointed domestic violence continues to be an issue in the NFL.

"The NFL's investigation, which began immediately following the incident in February, will include a review of the new information that was made public today," the league said.

Sources told ESPN's Adam Schefter that neither the NFL nor the Chiefs had viewed the video before it became public Friday. The league made multiple attempts to obtain it. The hotel told NFL representatives that it was corporate policy to turn video over only to law enforcement and therefore could not provide it to the league.

The NFL also contacted the Cleveland Police Department, which did not provide the league any video. Even though no charges were filed by law enforcement, the NFL continued its investigation, which included contacting the victims of the alleged incident, but they did not respond to multiple messages.

Hunt was at practice Friday but was sent home from the facility and excused from team activities after the release of the video, sources told ESPN's Dan Graziano.

The Chiefs have an AFC-best 9-2 record entering Sunday's matchup with the Oakland Raiders.

What is it? The list is a vehicle for putting a player on paid leave while the league conducts an investigation into allegations of impermissible behavior. The player does not count against the 53-man roster but continues to receive most of his salary.
What can/can't player do? If signed by another team, the player can't play in or attend games. But with the team's permission, the player can be present at its facility on a reasonable basis for meetings, individual workouts, therapy, rehabilitation and other permitted non-football activities.
How long can player remain on list? For as long as the NFL takes to conduct an investigation and determine whether discipline is necessary. The point is to keep the player off the field, and out of the public eye, until an objective determination can be made.

Hunt led the NFL in rushing as a rookie with 1,327 yards and eight touchdowns in helping Kansas City qualify for the playoffs. This season, he has run for 824 yards and seven touchdowns in 11 games and has seven receiving touchdowns.

But the former Toledo star has had trouble off the field, including the February incident and another in which he was accused of punching a man. Asked in August about the incidents, Hunt said he had "learned from it" and was focused on football.

"Kareem is a young man, second year in the league, obviously had a very big year on the field last year," Clark Hunt said. "I'm sure he learned some lessons this offseason and hopefully won't be in those kind of situations in the future."

Clark Hunt said in August that he didn't expect the running back to be disciplined by the NFL.