FLORHAM PARK, N.J. -- It was one of the New York Jets' OTA days this spring -- they run together -- when new defensive coordinator Gregg Williams walked past new coach Adam Gase on the practice field and casually told him, "Throwing in an odd today."

Gase's eyes got big, and he immediately looked for second-year quarterback Sam Darnold.

"So I quickly get with Sam and I'm like, 'All right, hey, he's going to be bringing his odd-pressure package, which is everything looks the same, you don't know whether they're coming or dropping or what,''' Gase recalled last week. "So I have to teach him this stuff at a rapid pace and be constantly going over it with him, and it becomes real. It becomes a real game."

Sam Darnold As A Rookie 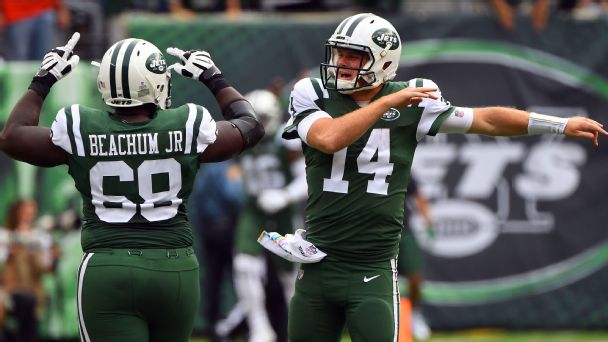 As much of an impact as QB-guru Gase is expected to have on Darnold's development in Year 2, the defensive guru Williams might be almost as important. Gase and Williams jaw at each other throughout the practices, both competitive and each determined to outdo the other on a given day. But amid that competitiveness, Gase believes, is something of significant value for Darnold as he learns a new offense and works to take a jump as an NFL starting quarterback.

"The amount of stuff he's seeing with Gregg, it just keeps morphing, and they keep throwing more stuff at you," Gase said. "And I think it's great for a kid like this. The more you can see in a practice that's real fast-paced, the better. Because it helps you in real time. When you're in a game and somebody throws something real oddball at you and you've been getting all these types of things in practice, your brain doesn't panic and you just kind of go through your progression. You kind of know where your outs are and where you need to go with the football."

Gase was the coach of the Miami Dolphins in 2018, when Darnold was one of five quarterbacks selected in the first round of the NFL draft. The Dolphins were poking around on quarterbacks but didn't look too deeply at Darnold because, at pick No. 11, they correctly believed there was no way they'd get a shot at him. So far, Gase has been thrilled with Darnold's attitude, his competitiveness and his raw ability.

"I don't even know if I really knew what arm talent was before I was around him, but this guy can really throw it," Gase said. "He can just flick the ball from awkward positions, he's got a great feel in the pocket, and he works to learn more of the offense every day."

The speed and success of that daily work will go a long way toward determining whether the Jets can put their tumultuous offseason in their rearview mirror once the 2019 season begins. For everything else that has gone on around here, the future of this team is tied mainly to the development of its second-year quarterback, who's still in the early part of a learning process.

"I've been confident throughout OTAs, especially this year just knowing the guys," Darnold said after Tuesday's minicamp practice. "Obviously, it's a little bit of a different offense than we had last year, so there's a process in getting to know that. But I'm definitely a lot more comfortable with the guys and being in the huddle and in terms of communicating and all that kind of stuff."

Having dropped in on Darnold at Jets minicamp last week, here's a little something on the four other 2018 first-round quarterbacks as each makes his way through his second NFL offseason:

In terms of 2019 success, there is no one on this list of whom more is expected than Mayfield. The Browns are the "It" team of the NFL offseason, having surrounded their second-year quarterback with high-caliber talent on both sides of the ball. Coming off a 7-8-1 season that nearly doubled their win total of the previous three seasons combined, the Browns expect to contend for the playoffs and more. And if that sounds audacious, Mayfield seems to be the perfect young quarterback to help deliver the message.

Whether it was calling out teammate Duke Johnson for his trade demand or dismissing Gerald McCoy's signing with Carolina with a "you're either with us or against us," Mayfield last week didn't sound much like a guy still getting his feet wet in the NFL. His brash attitude is one of the things the Browns liked about him when they drafted him, and they believe his rookie-year performance and offseason work are backing up his mouth.

"Baker works his tail off in everything he does, and it's no different this year than it was last year," first-year head coach Freddie Kitchens, who was the Browns' quarterbacks coach and offensive coordinator last year, told reporters at minicamp last week. "I think he's getting more decisive with his decisions that he's making, which is a good thing for a quarterback. You want quarterbacks to play as fast as possible, and I think he's getting to that point."

The Browns have four prime-time games this season, three of which come in the first five weeks. The spotlight will shine on Mayfield more brightly than it will on any of these other second-year signal-callers. Whether he and his star-studded cast can build themselves into winners overnight will be one of the most-watched stories of the season.

The Bills' focus this offseason was to overhaul the group around Allen -- particularly the offensive line. A Bills team that reached the playoffs in 2017 lost Eric Wood and Richie Incognito to retirement and traded Cordy Glenn to the Bengals last offseason.

"So we never were in sync last year on offense," Bills general manager Brandon Beane said last week in a phone interview. "The goal this year was to, first, protect Josh -- he can't do anything if he's on his back -- and then get our running game going."

"I would say he's a young version of Cam [Newton] -- not where Cam got to as an MVP, but Cam ran more his first year and I think ran less as he went along." Bills GM Brandon Beane, on Josh Allen's running ability.

This year's Bills could feature four new starters on the offensive line -- free agents Mitch Morse (center), Quinton Spain (guard) and Ty Nsekhe (tackle), and second-round rookie Cody Ford (guard). The improvements in that area, Beane believes, will help the running game whether it's LeSean McCoy, veteran newcomer Frank Gore or third-round rookie Devin Singletary carrying the ball. And that, they hope, will be an immense help to Allen, who led the team in rushing last season with 631 yards.

Accuracy was and still is the major criticism of Allen from the outside, and Beane is aware of that. But he has a different spin on it.

"Probably the biggest thing he has to improve -- outsiders may say accuracy, but I'm going to say decision-making," Beane said. "Josh is a very confident young man who believes he can make any throw, and in Year 1 that may have been to his detriment."

It also would be to Allen's detriment to be the team's leading rusher every year, and obviously the Bills don't want that. But Beane was a member of the Panthers' front office from 2008 through 2016, which means he was there when Cam Newton entered the league as a similarly massive but questionably accurate quarterback who could run. He has had to walk this line before.

"I would say he's a young version of Cam -- not where Cam got to as an MVP [in 2015], but Cam ran more his first year and I think ran less as he went along," Beane said. "We don't want Josh taking as many hits as we probably had Cam take."

Totally unique situation here, since Rosen was the first-round pick of the Cardinals in 2018, and they traded him in April after drafting Kyler Murray to replace him. It wasn't necessarily that the Cardinals regretted taking Rosen at No. 10 overall as much as it was a decision to turn the offense over to new coach Kliff Kingsbury, who viewed Murray as the perfect fit for his offense.

Whatever the reason, Rosen is in Miami, competing with Ryan Fitzpatrick for the starting quarterback job but also looking for an opportunity to convince the Dolphins' coaches they don't need to draft a quarterback next year.

Reports out of Miami say Fitzpatrick looks better than Rosen does so far, which means very little this time of year but underlines the oddity of Rosen's situation. With Arizona having paid the signing bonus on Rosen's rookie contract, he costs the Dolphins almost nothing over the next three years, so they aren't as invested in his success as they would have been if they'd drafted him.

He'll surely get the chance to play and show what he can do, whether it's in Week 1 or down the road, because the Dolphins need to assess what they have before deciding what to do about the position next offseason. But so far, what you've heard the coaches say is stuff like, "He's talented but he's got a lot to learn," which is really saying very little.

At this point, Rosen is a total wild card. He could be Miami's quarterback of the future, in which case it absolutely stole him from the Cardinals. Or he could be just another Dolphins QB miss as they continue to search for their long-term answer.

The only member of this QB class to reach the playoffs as a rookie, Jackson took over for an injured Joe Flacco in Week 11 and went 6-1 to close out the regular season for a division-champion Baltimore team.

Now, the Ravens averaged 45 rushing attempts per game from Weeks 11 through 17 -- 10 more than any other team over that span -- and led the league with a stunning 229.6 rushing yards per game. Jackson was the seventh-leading rusher in the league -- not just among quarterbacks, among all players -- during those seven weeks and averaged 17 rushing attempts and just 27 dropbacks per game. The way Baltimore designed offensive game plans late last season did little to quiet those who believe the team didn't trust Jackson to throw the ball. His 58.2 completion percentage didn't help either.

This season's Ravens offense will be designed around Jackson's abilities but will absolutely ask him to throw the ball more. Which means he has work to do.

"You're always chasing consistency," Ravens quarterbacks coach James Urban said in a phone interview last week. "Consistency in terms of throwing accurately, the mechanics involved, repeating the motion. They certainly haven't been eliminated, but there are much fewer, 'Where-did-that-come-froms' this year when we watch him practice. It looks better in many ways. The ball comes out cleaner, the timing looks better."

Urban says Baltimore will continue to lean on Jackson's outstanding skills as a runner, but that the team is working with him on decision-making in that aspect of his game as well. Jackson fumbled the ball 12 times in the regular season and three more times in the Ravens' playoff loss to the Chargers.

"Huge emphasis," Urban said of the fumble issues. "I like to call it the squeaky wheel of his game, and the squeaky wheel is getting the oil every day out here. Mistakes he's made in terms of holding the ball, carrying the ball, we're making sure, when it shows up in practice, that it's pointed out and worked on."