Editor's note: This is part of a weeklong look at the Pro Football Hall of Fame Class of 2019, focusing on plays, moments or defining characteristics of the inductees. Induction is Saturday at 7 p.m. ET, on ESPN.

FOXBOROUGH Mass. -- When it comes to signature plays in the career of longtime New England Patriots cornerback Ty Law, it is hard to top his 47-yard interception return in the shocking upset of the St. Louis Rams in Super Bowl XXXVI.

The unexpected victory sparked what has become a dynastic run of Patriots success, and Law's induction into the Pro Football Hall of Fame this year makes him the first Patriots defender from that championship era to earn entry. He believes there should be more.

Law totaled 53 regular-season interceptions and added six more in the playoffs over his 15-year career. He was often at his best on the biggest stage, which is another reason his 47-yard pick-six against the Rams was viewed by many as a signature play.

Patriots owner Robert Kraft: "We're the biggest underdogs in the history of the Super Bowl. It's the second quarter and that was just amazing. It was a play that put us in the lead 7-3. Such a thrilling moment."

Law: "We had played them in November, and while we lost, we learned from that. At first, Romeo Crennel, our defensive coordinator, let us know we'd be playing zone in the Super Bowl, but I was passionate about us having a chance to play man, to try to disrupt their timing. We didn't play a lot of man in the regular-season game."

Rams quarterback Kurt Warner (now an NFL Network analyst): "In an era where you could be physical, I think that's where it started with Ty. I always look at great players as those who can beat you or be successful numerous ways. That, to me, was who Ty was. He had the ability to get up in your face and be physical and win that way. He had the athleticism to be able to run with the best receivers in the league and play athletically. And he had instincts on top of that. You put that combination together and you get a Hall of Fame player."

Law: "I wanted Isaac Bruce, and Otis Smith would take Torry Holt. We wanted to get up in their face. That was a strength of ours."

Warner: "The unfortunate thing, and obviously nothing against Ty, he didn't do a whole lot on the play because I basically hit him in the numbers. It was one of those plays where we had a protection called, and we were supposed to block it differently than we did. What happened, it was Mike Vrabel off the edge, the right side, and we were supposed to block him. It caught me off guard that, all of a sudden, the defensive end came free. So I tried to anticipate where Isaac was going to come out on his route, and I anticipated wrong. I threw it way behind Isaac and hit Ty in the numbers. He didn't have to do anything but run it in the end zone."

Law: "You just want to make sure you don't drop it, because you almost can't believe it's coming. We had been playing physical and waiting for a big play to result from it."

Patriots receiver Troy Brown: "I just saw Ty getting a break on the ball. He was never the fastest player in the world, but he always played good angles, and had good leverage on the guys he was covering, and was very confident in his ability and what he saw. It was thrown a little bit behind Isaac Bruce, Ty was breaking on it, and I thought he had a play. Even if it was a good pass, he still had a chance to make a play on it. He usually doesn't drop too many of those opportunities."

Law: "Mike Vrabel helped make that play. He put the pressure on. I was just there and it was an easy play compared to a play where you are reaching up, or diving."

Warner: "The ironic thing about that play, of all the plays Ty made -- whether it be in that game or other times I played against him -- that one was more 'right place, right time,' catch the football and run, than anything. But what I would say about that play is that when you're talking about Hall of Fame players, a lot of them have those signature moments. Those difference-making plays. I say 'right place, right time' but that's what Hall of Fame players do. They put themselves in those situations to make the play that makes the difference. It was a signature play for him that helps to kind of put the stamp on his Hall of Fame career if someone is saying, 'Is he a Hall of Famer?' You look at what a player does in the biggest moments, when they had a chance to change the complexion of games, did they do it? That's a great example of Ty doing it."

Kraft: "I'll never forget him raising his arm as he raced down the sideline. That play, and him putting his hand up in the air, was a defining moment. To me, it was the turning point of the game. And probably helped build team confidence that we could win the game."

Brown: "We knew we had to have those kind of points put up on the board for us to have a chance to win, to help slow them down. That was obviously a confidence-builder for us, and put a little pressure on us on offense to go out and make the same type of plays, score some points, and try to keep [the defense] rested." 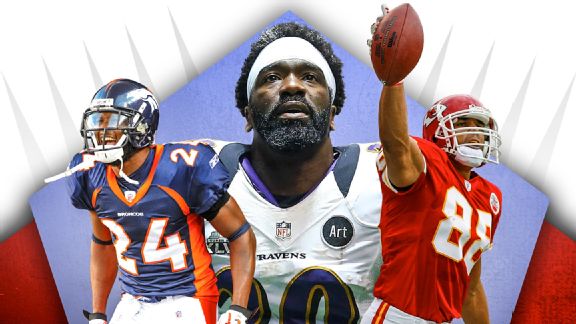 From a man who blocked for Curtis Martin to one of the defensive anchors of the Patriots' first Super Bowl team, we celebrate the Pro Football HOF Class of 2019. » Read more on each class member

Warner: "We were having a magical year, so good offensively, that we never really felt like anybody could stop us. That was just kind of the nature of how we played. Obviously the Patriots had a great defensive football team that year, but at the same time at that point in their careers, maybe you knew Ty, maybe you knew Lawyer [Milloy] a little bit. But there wasn't a lot of guys that necessarily stood out as great defenders. You knew their defense as a unit played really well, and kind of thought it was scheme-oriented. I think we grew an appreciation for the type of players they had, but maybe weren't the most flashy players or biggest names. The Tedy Bruschis, Mike Vrabels, obviously Willie [McGinest] was a great player. Then the intelligence they had as players as well. I don't think there is any question that plays like that, and that play specifically, was kind of a reminder to us 'This isn't going to be one of those games where you just have your way and do whatever you want to do.'"

Brown: "That was huge for us, and obviously a big difference in the game, winning by three points. It got the game started for us. It's not like we were playing with a 12-year vet in Tom Brady. He was still a young pup. A lot of us were just out there running around. Ty coming up with that play was huge."

Warner: "What I remember most was that we had like 450 yards of offense [officially 427] in the game, but what the Patriots have always been so good at is bend but don't break. They're going to give you stuff, but will make the plays they need to make at critical times. They're going to make the adjustments they need to make, or keep you out of the end zone. That was what was rare for us -- when we put up 450 yards, we put up 45 points. That was how the Rams did it. We had plays, but they forced us into mistakes in that game. Mistakes we didn't either normally make, or that we usually bounced back from. We weren't able to do that in that game. I think that [Law's interception] was a little bit of a statement -- we could already feel the kind of struggles we were having offensively, but then when you make a mistake and the other team capitalizes on it to put points on the board to take the lead -- now you start to go 'OK, not only is it a battle, but we need to do something to take control of this football game, because right now we're not in control ...' That was an odd place for us to be as an offense."

Brown: "He got the scoring started, put us in a good position. So it was like 'let's make some noise.' That's a typical Ty Law play. I saw him make it 1,000 times after that, too."

Law: "No one was catching me from behind. And I could see there wasn't anyone in front of me."

Kraft: "I'll always have an image of him running down that left sideline, and putting his hand up in the air."