The Dallas Cowboys and Ezekiel Elliott have come to terms on a six-year, $90 million contract extension, a source told ESPN on Wednesday.

The deal has $50 million guaranteed, a source told ESPN's Ed Werder, surpassing Todd Gurley's $45 million as the most for an NFL running back. Elliott, 24, was under contract through 2020 and was set to make $3.853 million in 2019 and $9.09 million on the fifth-year option in 2020, making his total compensation through 2026 more than $100 million, which makes him the highest-paid running back in NFL history.

Cowboys owner Jerry Jones confirmed on CNBC that Elliott had agreed to a deal Wednesday morning, and the team posted a picture of the running back signing his contract on social media.

"I'm $100 million lighter as of this morning," Jones said from New York, where he and his son, team executive vice president Stephen Jones, rang the opening bell at the New York Stock Exchange. "Zeke has been arguably our best player,"

"We're glad to get him booked in. We're glad to have him on the team. He plays a position that has some pretty interesting dynamics to it because running backs are short-lived, although we had what I consider to be one of the top five greatest ones in Emmitt Smith. And Emmitt ran the ball for 13 years, so you don't have to have a four- or five-year career to be a running back.

"On the other hand, Zeke allows us to create such problems for the defense that he can open it up to our passing, open it up for Dak Prescott. Of course we've got to have some guys on defense to get those guys the ball. That's what this is all about."

The Cowboys will save about $1.6 million in cap room this year on Elliott's new deal. Elliott will receive a signing bonus of $7.5 million and a base salary of $752,137 this year, according to a source. Elliott's old cap number was $7.940 million. His new cap number is $6.339 million.

Cowboys coach Jason Garrett's message to Elliott "was just to get back to work."

Elliott showed up for the 7:30 a.m. CT Breakfast Club meeting, the walk-through and meetings and is getting set to take part in his first on-field work with the team since minicamp in mid-June. He missed all of training camp and the preseason as negotiations continued, moving his base camp to Cabo San Lucas, Mexico, before the deal was reached.

"He's in very good shape," Garrett said Wednesday. "He looks good, but he hasn't practiced with pro football players, so we'll just see how he fits back in. But he's a quick study. He's a smart guy, got excellent football IQ. So we'll just see where he is and adjust accordingly as we go."

The Cowboys will have a roster exemption for Elliott to practice this week. For him to play against the Giants on Sunday, the team would have to add him to the 53-man roster and make a corresponding move.

The Cowboys drafted Elliott with the No. 4 overall pick in the 2016 draft, and he quickly emerged as one of the NFL's best backs.

He set a Cowboys rookie record with 1,631 yards, which led the league, and 15 touchdowns in 15 games. He led the league in rushing in 2018 with 1,434 yards -- once again playing in only 15 games, as his coaches opted to rest him for the season finale with the Cowboys' playoff seeding set.

Elliott is the fifth player since the NFL/AFL merger in 1970 to lead the league in rushing twice in his first three seasons. Cowboys Hall of Famer Emmitt Smith, the NFL's all-time leading rusher, also accomplished the feat in 1991 and 1992.

In 2018, Elliott joined Herschel Walker as the only Cowboys running backs to have more than 1,000 yards rushing and 500 yards receiving in the same season.

Elliott leads the league with 4,048 rushing yards since his debut in 2016. Gurley of the Los Angeles Rams is second with 3,441 yards.

But it has not been all smooth for Elliott.

He was suspended six games in 2017 for violating the league's personal conduct policy stemming from an alleged assault in 2016 of a former girlfriend in Columbus, Ohio. Elliott was never charged or arrested, but the league punished him in accordance with the policy, starting a string of events that led to a long court battle until Elliott acquiesced.

When asked how different this return by Elliott is compared to 2017, Garrett said, "Every situation is different."

"You just try your best to gauge them and try to put the player, the team in the best position," Garrett said. "Obviously he was with us all throughout the offseason. He missed training camp. Really hasn't played in preseason games in the past, so there's a lot of different factors to weigh. The biggest thing you do is you get him back in here and you get him back to work. You get feedback from him as to how he's doing. You watch him and you make your best judgment in how you want to use him going forward."

Elliott was not punished by the NFL after an incident in May involving a security guard at a music festival in Las Vegas. Through all the off-field issues, the Cowboys have supported Elliott. 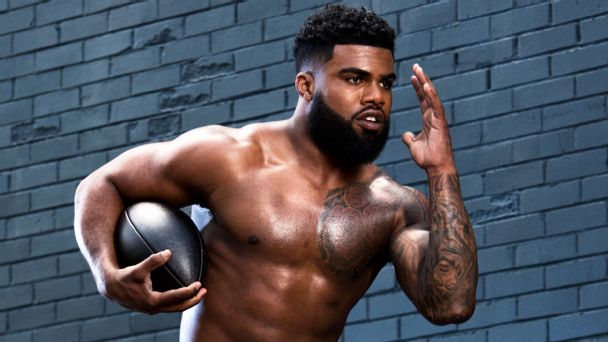 • See the Cowboys RB as the cover athlete
• Gallery: 2019 athletes plus archive photos

Elliott was subject to fines of $40,000 per day for missing training camp and also could be forced to pay back a little more than $1 million of a prorated portion of the signing bonus he received from his rookie deal. The decision to hold Elliott responsible for those payments is at the team's discretion.

With Elliott under contract, the Cowboys can now focus more on the contracts for Prescott and wide receiver Amari Cooper.

They have had conversations with the agents for both and are expected to have more. Prescott and Cooper can become unrestricted free agents when the season ends. However, because 2020 is the final year of the collective bargaining agreement, the Cowboys would have the ability to use the franchise and transition tags to keep the QB and receiver.

Prescott is due to make $2.02 million and Cooper $13.9 million on the fifth-year option of his rookie deal.