The Rams rebuilt their cornerback depth chart Tuesday. In addition to putting veteran Aqib Talib on injured reserve, they traded away one former All-Pro cornerback, Marcus Peters, to the Ravens and then acquired another in Jaguars standout Jalen Ramsey. It's clear they didn't get what they wanted when they traded a second-round pick and a swap of selections in 2018 to the Chiefs for Peters; is this trade likely to go better?

I'm not surprised that L.A. traded Peters and made a move for Ramsey. I suggested last week that they could make both these moves, though I put them together as part of a swap sending Peters to Jacksonville. Over the past few years, the Rams have repeatedly used their top draft picks to target talented players still on rookie deals. If the draft is full of uncertainty, the Rams' solution is to wait and see who pans out and trade their picks accordingly.

The problem with that philosophy, though, has already begun to rear its head for this team in 2019. As constructed before the Ramsey trade, this Rams roster had major holes along the offensive line and at edge rusher and cornerback. Injuries have deprived them of several key contributors in Talib, Clay Matthews and Todd Gurley, but those are also two 33-year-olds and a running back with knee issues. Building a roster in which a team is counting on those guys to stay healthy is a risky proposition.

In lieu of drafting and developing a cornerback with a first-round pick, the Rams have now committed two first-round picks and a second-round pick to solving a point of weakness on their roster. Cornerback was a problem for them, and Ramsey should be a major upgrade on Peters, whose inconsistency had grown exhausting. It's one thing to get overmatched by a superior receiver; it's another to stop running against Mike Evans in man coverage.

Trading for Ramsey could transform the Rams' defense. According to ESPN's coverage analysis from the NFL's Next Gen data, the Rams have played some version of a man-to-man concept in their secondary on just 34% of their snaps in 2019, down from 41% in 2018 and 53% in 2017. Ramsey's desire to play in a man scheme and take out the opposing team's No. 1 wideout is well-known. I would suspect that trading for Ramsey will encourage defensive coordinator Wade Phillips to send more pressure and play tight man coverage behind.

In a vacuum, should you want Ramsey on your team? Of course. He's a 24-year-old cornerback with Hall of Fame-caliber ability. For whatever complaints some might have about his attitude after showing up to camp in an armored bank truck, I don't recall guys like Deion Sanders or Ty Law acting like choirboys when it came to their contracts, and their teams still won plenty of games.

Ramsey might not be at Sanders' level, but since the start of 2017, the former first-round pick has allowed a passer rating of just 56.2% on throws in which he was the closest defender in coverage. The only corner with a better rating over 400-plus coverage snaps is his former Jags teammate A.J. Bouye. Ramsey is first in average yards allowed per target and sixth in coverage success rate over that time frame. He's capable of playing both on the outside and in the slot. The Rams are getting a superstar.

Right now, though, I'm not sure what the Rams need is a superstar. They already have as talented of an inner core as any team in the league, but after trading away so many high draft picks over the past few years, what they lack is depth. Even after trading for Ramsey, they have a question on the opposite side of the field at cornerback in Troy Hill, who will presumably be filling in for Talib. The Rams could bring back Talib for the postseason, but he's a free agent after the season. L.A. has 2019 third-rounder David Long on the roster, but if it was confident Long was going to step in and be an immediate contributor, it wouldn't have traded two first-round picks for Ramsey.

When the Rams made the trades to acquire Peters, Sammy Watkins and Brandin Cooks, they were in a fundamentally different financial situation. Watkins was acquired before the Rams had paid Aaron Donald. Peters and Cooks came before Gurley and Jared Goff were locked up on massive contracts. Cooks has his own deal now. The Gurley deal looks to be a major mistake, and while it's still impossible to make any sort of declaration about the Goff deal, the early returns have not been promising.

Ramsey, who's under contract through 2020, will require his own massive extension, and after trading two first-round picks to acquire him, the Rams won't have a credible case for holding out on a deal. He will become the highest-paid cornerback in football history, either now or after the season. The team was already going to have issues building a useful roster around its core. That core is about to get much more expensive.

By trading two first-round picks, though, the Rams lose out on the two best ways they could have supplemented their roster with the sort of cheap, young talent every team needs. They have no clear path to replacing star left tackle Andrew Whitworth, whose decline in 2019 has badly affected the offense's viability. There's no way for them to draft a top-tier edge rusher to either supplement or replace edge rusher Dante Fowler Jr., who will be tough to retain. A first-round pick would have come in handy to replace Talib or safety Eric Weddle. All of that assumes everything goes right and the Rams don't ever need or want to replace someone like Goff, Ramsey or Cooks.

This is the sort of move a team makes if it's one star cornerback away from winning a Super Bowl. The Rams probably think that's where they are, even after their three-game losing streak. Investing assets on the defensive side of the ball and trusting Sean McVay to figure out the offense makes sense, but it's a little too late after they spent most of the past two years investing their money in offensive talent. It wouldn't shock me if Ramsey helped turn around a defense that ranks 31st in Total QBR allowed over the past three weeks, but the Rams realistically have to win a championship for this trade to pay off.

As for the other side of this deal, it's clear that the Jaguars finally gave in. Jaguars owner Shahid Khan didn't want to make this deal. After the initial disagreement Ramsey had with coach Doug Marrone and the subsequent disagreement Ramsey had with a member of the Jaguars staff that led to his trade request, Jacksonville publicly supported Ramsey and encouraged him to return to the fold. It was only after Khan met with Ramsey and publicly said Ramsey would play in Week 6 -- only for Ramsey to sit out against the Saints -- that the team made its move. 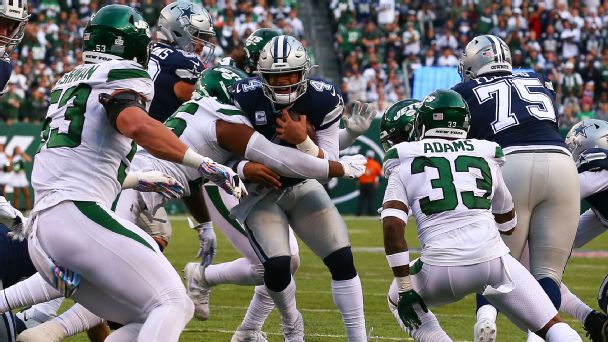 There's no joy in trading away star players. Ramsey was the best player Dave Caldwell selected during his time as general manager. Ramsey was a Florida State product and a building block with the sort of attitude that resonated with fans in the state. Jacksonville's defense has given up a passer rating of 81.7 with Ramsey on the field and 89.9 without its stud cornerback since he entered the league. Trading him gives the Jaguars more financial flexibility as they prepare to re-sign pass-rusher Yannick Ngakoue, but the chances of these draft picks delivering a player as good as Ramsey are slim. The Rams needed depth, not another star. You might argue the opposite for the Jaguars.

Jacksonville will move forward with Bouye and Tre Herndon at cornerback, with the latter drawing plenty of attention from opposing quarterbacks since taking over for Ramsey. Gardner Minshew has earned plaudits since taking over for Nick Foles, but it's still too early to say anything about his long-term viability. Foles still has more than $21.1 million in practical guarantees remaining on his current deal with the team, but the Jags now have four first-round picks over the next two years. If they fall in love with a highly regarded quarterback and want to move up, they have as much ammunition to make a deal as any other team in the league outside of Florida.

After committing significant resources via the draft and in free agency to building a dominant defense, the Jaguars can now also reposition and commit more toward finding pieces on the offensive side of the ball around breakout wideout DJ Chark.

I also don't love the move to simultaneously deal Peters to the Ravens for a fifth-round pick and linebacker Kenny Young, who started three games this season before being benched. Young gives the Rams a backup linebacker with some potential, and Phillips has a track record of turning unproven linebackers into stars, but the legendary defensive coordinator could turn a typical late-round pick into a similarly impactful contributor.

Selling low on Peters doesn't do the Rams many favors. It's hard to figure that he would have been less valuable to the 2019 team than Young and a future fifth-round pick, especially given Talib's injury. It's possible that the Rams were just over the oft-frustrating corner and wanted to move him at whatever cost, but having him on the roster as a third or fourth cornerback seems as if it would have been worth it for a team with championship ambitions.

The Rams could have netted a compensatory pick from another team if they had simply held on to Peters and let him leave in free agency; this deal gets the Rams the pick in 2020 as opposed to 2021. Trading him created some cap space that the Rams probably will use in Ramsey's extension later, but they could have created more room if necessary by restructuring some of their existing deals.

For the Ravens, they unsurprisingly make a logical move. Trading for Peters lets them take a flier for the rest of the season on a player with an All-Pro ceiling. Baltimore's secondary has been disappointing this season, primarily owing to injuries to Jimmy Smith and Tavon Young, the latter of whom is out for the year. Peters probably will step in for Maurice Canady in the short term, and the Ravens will be the ones to net a compensatory pick if they decide to move on from Peters in 2020.