A wide receiver out of USC who was projected as the top pick of the 1996 draft, Johnson knew fans wouldn't see his face during games. It would be obscured by a helmet and face mask. But they would see and remember his number. So Johnson decided to break the NFL rule that required receivers to wear a number from 80 to 89, the start of a trend that would extend into the 2019 season as receivers associate their numbers with looks, style and branding.

Johnson first wanted to wear No. 3, his college number, but the NFL denied that request. It did, however, offer a compromise: If Johnson were drafted by a team for whom all 80s numbers were in use, he could then wear a number from 10 to 19. Johnson took the hint. When the New York Jets selected him No. 1 overall, he waited for them to assign numbers to every other receiver on their expanded roster. When Johnson's turn came, all of the 80s were taken. Too bad. He chose No. 19 for training camp, and the NFL permitted him to keep it even after several numbers in the 80s became available.

"We wanted to do something that would differentiate the other receivers that were already playing and myself," Johnson, now an ESPN NFL analyst, said recently. "I wasn't just a unique talent, but a unique personality that could capture the fan base and have fans gravitate toward, you know, me. When you saw No. 19, you automatically knew what that stood for and why it was that way.

"It was all about looking cool and different, and being someone that people could identify with. When you see a green No. 19 jersey, who is the first person you think of? When you see 19 in all of the NFL, you don't think of [former San Diego Chargers receiver] Lance Alworth. You think of Keyshawn Johnson. And Lance is a Hall of Famer. It's a unique and cool kind of thing."

As it turns out, Johnson was far from the only wide receiver who thought that way. Amid widespread protest, the league changed its rule in 2004 and allowed receivers to wear numbers from 10 to 19 and 80 to 89. And since then, most receivers have migrated away from numbers in the 80s.

"Like most things I've done in my career, people started to get jealous," Johnson said. "Agents of other players started complaining that they were not allowed to wear 19, but I was."

Most of today's receivers were just beginning their youth football careers when the NFL changed the rule, and the majority of them shifted in favor of the teens. With the help of ESPN's NFL Nation reporters, we set out to understand if they are following Johnson's lead, in spirit if not by name, or if those low numbers have simply become the default. We learned that most everyone has a story behind his number, even if it is as simple as honoring a favorite player or listening to the suggestion of an equipment manager.

The most interesting responses, however, came from those who said they not only look better in jerseys with numbers from 10 to 19, but also faster, slimmer and more agile. Numbers in the 80s, they said, should be reserved for bigger, slower players. That association has a connection to the science of multisensory perception, one that could help explain how this migration took hold.

DJ Chark Jr. initially wore No. 82 at LSU because everything else was taken. He switched to No. 7 for his final season and took No. 17 when the Jacksonville Jaguars drafted him in 2018.

"My senior year, when I was able to get 7, that was way more swaggy than an 80 number," the 2019 breakout receiver said. "Eighty numbers just don't look good to me. It's hard for you to swag that. A few people can swag it out, but I feel like with my body type -- I'm a bigger receiver [at 6-foot-4] but I'm also skinnier -- so a teen number looks better."

Marvin Jones Jr., meanwhile, switched from 82 to 11 in 2016 when he left the Cincinnati Bengals and signed with the Detroit Lions. Part of the change, he said, was to symbolize a fresh start. But Jones didn't want just a different number. He had come to realize the inferences wrapped up in a lower digits.

"The teens," he said, "those are for the skill positions. Those are the people with the most swag and stuff like that. I guess that's kind of where it came from. It started to be a universal thing." 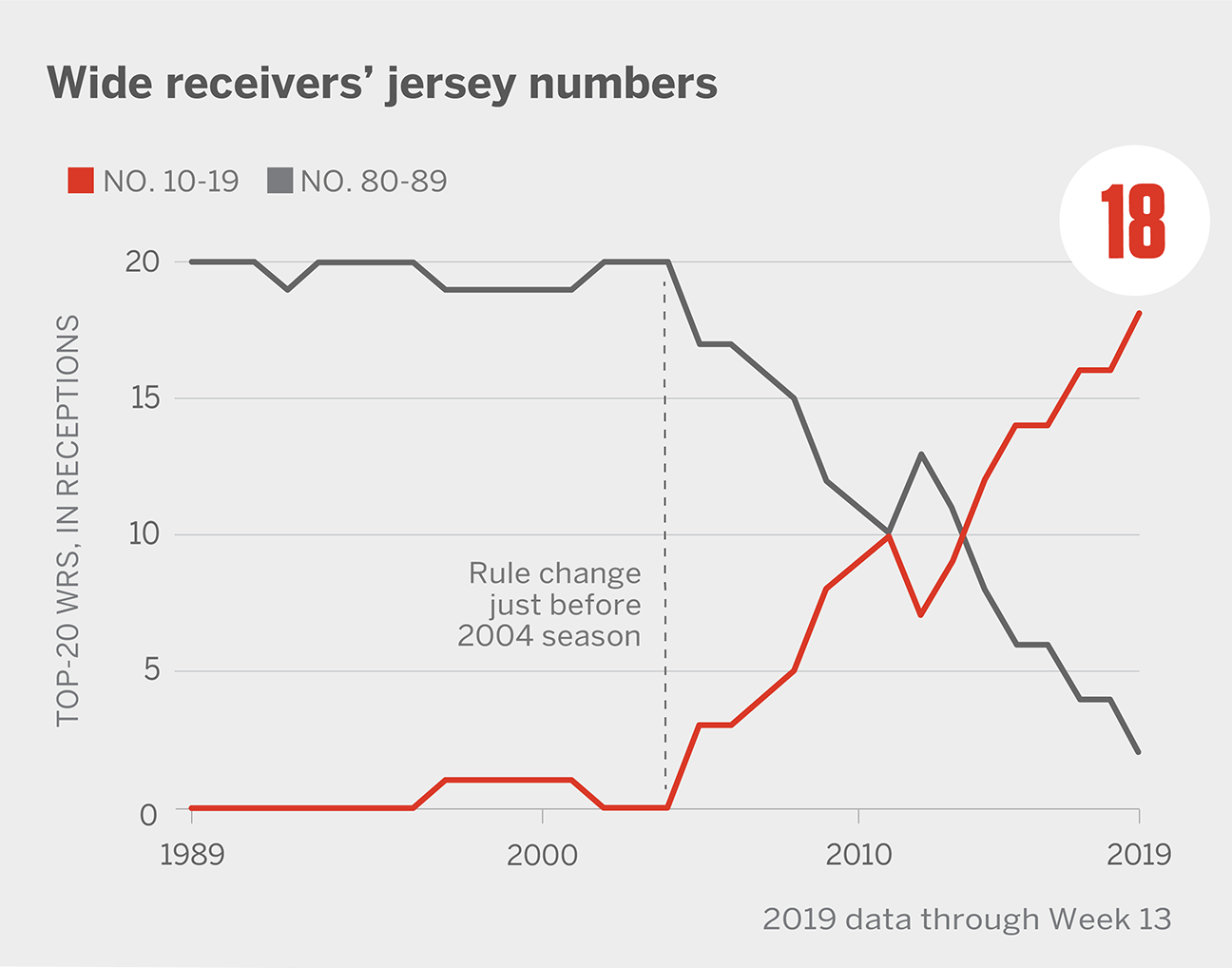 Sanders was assigned No. 88 when the Pittsburgh Steelers drafted him in 2010. He pivoted to No. 10 after signing with the Denver Broncos in 2014 and now wears No. 17 for the San Francisco 49ers.

"I got No. 17 because I was 17 in college at [SMU]," said Sanders, who is 5-foot-11. "It kind of went full circle ... The teens just look better. I feel like back in the day for an outside receiver in the NFL, you had to be like 6-2, 6-3. They wanted big guys. Today's NFL, you can get any size receiver. So, for smaller receivers to have those big numbers, it just looks weird."

Dallas Cowboys receiver Randall Cobb has worn No. 18 since college to honor one of his best friends, who wore the reciprocal No. 81. But he agreed with Sanders and others about numbers from 10 to 19. "It's just the way it looks," he said.

The association between numbers and appearance might not be as superficial as it seems. The human brain keeps track of information in our daily interactions "even if we're not paying attention," said Ladan Shams, a cognitive neuroscientist who is a professor of psychology, neuroscience and bioengineering at UCLA. The statistics of attributes such as the size, weight, color and location of objects we encounter and the relationship between the attributes are generally stored in the brain and all create an infrastructure that helps interpret new situations.

While there is no accepted research on the impact of jersey numbers on perception, Shams said it would make sense if football players perceptually or cognitively associate smaller numbers with lower mass and faster speed.

"We go grocery shopping and we're buying rice," Shams said. "And there is a number on the bag. It might say 10 pounds or 15 pounds of rice. That may affect how we associate the larger mass of objects with a larger number written on them. Take athletes who might spend a lot of time in the gym lifting weights. They see different weights with different numbers on them. This is 25 pounds. That one is 10 pounds. That may contribute to the formation of the association between written numbers and the mass of objects.

"So if that's the case, if there is an association in the perceptual system between larger written numbers with heavier objects, then that association may extend to human bodies and jersey numbers. Also, lighter bodies tend to be slender and they tend to be more agile. This association links the smaller numbers with being slender, lighter, faster. So there can also be an association between the magnitude of numbers and slenderness and agility."

In other words, a number from 10 to 19 may trigger our brains to perceive a receiver as faster and more agile than one who is wearing a number in the 80s. Think about your initial impression of college defensive linemen who wear numbers in the single digits such as Auburn's Derrick Brown, who wears No. 5. Brown, a potential first-round pick for the 2020 draft, is listed at 318 pounds. Would you guess he weighed that much if you saw him on the sideline wearing No. 5, rather than lined up over center?

"There can very well exist an association between magnitude of numbers and heaviness, either at a perceptual or a cognitive level," Shams said. "[The players'] feeling that the smaller jersey number may make them look more slender or faster, it may not be completely meaningless. There may be something to it."

The one outlier? In 1991, the Atlanta Falcons assigned No. 35 to receiver Mike Pritchard because they thought they might also use him as a running back in their run-and-shoot scheme. But Pritchard caught 201 passes over three seasons before leaving to join the Denver Broncos, where he took No. 81.

Not all receivers who spoke with ESPN seemed to care whether their number is in the range of 10 to 19 or in the 80s. The Bengals' A.J. Green said he wears No. 18 simply as a combination of his high school number (No. 1, though he wore No. 84 during his freshman season because Randy Moss was his favorite player) and his college number at Georgia (No. 8). The Lions' Marvin Hall said: "I honestly feel like they are just numbers at the end of the day. The player is what makes the numbers."

The first receiver to opt into a number from 10 to 19 after the 2004 rule change, the Arizona Cardinals' Larry Fitzgerald, has attributed his decision to a team staffer who figured No. 11 was the closest he could get to the No. 1 he wore at the University of Pittsburgh.

Jarvis Landry chose No. 14 when he was drafted by the Miami Dolphins to match the year (2014). But when he was traded in 2018 to the Cleveland Browns, there were no numbers from 10 to 19 immediately available. So he took 80, the number he wore in high school and college, to honor both his brother and his family's favorite player (Jerry Rice).

Landry is one of two players who wear a number in the 80s currently among the top 20 wide receivers in receptions this season, with the Bengals' Tyler Boyd (No. 83) being the other. And oddly enough, not a single wide receiver who wears one 80s number -- No. 85 -- even has a catch this season.

Keyshawn Johnson's nephew, New Orleans Saints star Michael Thomas, wears No. 13 after emulating Johnson's No. 3 at Ohio State (83 was "too far away"). He points out that the teen numbers are family tradition. Johnson himself said the only motivation he had was to be "cool and different," but agreed that he often correlates smaller numbers with athleticism -- and not just for receivers.

He, for instance, thinks that Jets quarterback Sam Darnold made a big mistake choosing No. 14.

"If he was wearing No. 4," Johnson said. "He would look cool, like Deshaun Watson in Houston. Instead, he is wearing this ugly 14 that makes him look like a dropback quarterback, when he's actually a pretty damn good athlete. If he wore 4, he would look awesome."

That number worked wonders for another quarterback, Johnson contends.

"Brett Favre was 4," Johnson said, "but what he did is he gave you the illusion that he could run and do a lot of things, even though he couldn't. Look how cool that made him."

Favre did rush for 1,503 yards and 11 touchdowns in his first nine seasons as a starter for the Green Bay Packers, from 1992 to 2000, before spending the rest of his career largely behind the line of scrimmage. He was always nimble in the pocket, but to hear Johnson tell it -- and there's probably some science behind it -- Favre's single-digit number elevated the perception of those skills.

The irony is that jersey numbers from 10 to 19 are decidedly old-school. Prior to 1973, receivers could wear all sorts of numbers. Alworth wore No. 19, Don Maynard wore No. 13 and Charlie Joiner wore No. 18. All three are in the Pro Football Hall of Fame. (There are 16 wide receivers who wore numbers in the 80s in the Hall, including Moss, Rice, Cris Carter, Marvin Harrison, Raymond Berry and Lynn Swann.)

In a way, Johnson connected a lost era of football history to the present. He capitalized on the perceptual tendencies of the human brain without realizing it. And, most importantly, he defined what was cool in the 1990s and watched it transition into swag in 2019.

"What it's always about," Johnson said, "is being able to identify what's cool. And I was the one who started it all."