Editor's note: This story was originally published on Dec. 27, 2019 and has been updated.

Pro football began and ended the 2010-19 decade as the country's most popular sport. A few things happened in between, of course, and what follows is our attempt to pick out the most significant ways pro football and the NFL have changed in the past 10 years. Let's dive in.

Note: All statistics are courtesy of ESPN Stats & Information research unless otherwise noted.

The mainstreaming of analytics demonstrated -- for all who cared to listen -- that NFL game strategy is far too conservative. On-field buy-in remains limited, but there has been an indisputable rise in aggressiveness from some coaches and franchises.

During the first three quarters of games, when game situations remain fluid, fourth-down attempts have risen 55% since the start of the decade, and 2-point conversion attempts have spiked 569%. Some coaches are going for two when down eight points in the fourth quarter, rather than waiting until later when there would be less time to compensate for a miss. Analytics covers more than fourth downs and 2-point conversions, but its most visible impact has been to deliver games that are more interesting and dramatic.

2. An end to stadium games

Five teams moved into new stadiums during the decade. Three more will do so in 2020. And that will largely end an era of high-stakes negotiations across the country, one that delivered billions of dollars in public money and helped double annual league revenues from about $8.5 billion to nearly $17 billion. The frenzy climaxed with the abandonment of three longtime NFL cities -- St. Louis, San Diego and Oakland, California -- and forced the league to cash in its most lucrative leverage chip: Los Angeles.

With the Rams and Chargers moving into Los Angeles' SoFi Stadium, and the Raiders headed to Allegiant Stadium in Las Vegas, there are no obvious relocation threats outside of logistically challenged London. There will always be teams mulling their stadium futures -- as former NFL executive Eric Grubman said in 2017, "If you build a house, it's not like you never ever do anything to the house for the next 30 years" -- but the frenzy is over. For a while, at least.

4. A late-decade changing of the guard at QB

Remembering Past Decade in NFL

In 2010, the NFL's top 15 quarterbacks, as ranked by Total Quarterback Rating (QBR), included Tom Brady, Peyton Manning, Matt Ryan, Drew Brees, Aaron Rodgers, Ben Roethlisberger, Philip Rivers and Eli Manning. Peyton Manning retired in 2015; his brother Eli retired after the 2019 season. The rest remain active but have mostly been eclipsed by a new wave. Brees and Ryan are the only members of that 2010 group to rank among the top 15 in QBR this season.

In their place is the 2019 MVP Lamar Jackson, along with Super Bowl LIV MVP/2018 MVP Patrick Mahomes and a host of other dynamic players. And it should be lost on no one that five of the top seven in QBR this season -- Jackson, Mahomes, Dak Prescott, Deshaun Watson and Russell Wilson -- are black. That's more than twice the number in 2010 (Michael Vick and Josh Freeman) and a strong sign that the NFL has overcome one of most shameful stains in its history.

Alternative football leagues are swinging harder than ever to capitalize on the NFL's popularity, despite the pileup of failed predecessors over the past 50 years. In the 2010s alone, the United Football League (UFL) succumbed, the Fall Experimental Football League (FXFL) couldn't make it and the Alliance of American Football (AAF) shuttered before the end of its first season.

As the decade closed, however, the FXFL has rebranded as The Spring League, and WWE owner Vince McMahon has spent $200 million to resurrect the XFL, which kicked off in February 2020. The XFL shut down midway through its first season amid the coronavirus pandemic, declared bankruptcy on April 13 and is now for sale. There is no doubt that football is the country's most popular game, but there is considerable uncertainty if any organization other than the NFL (and the NCAA) can monetize it.

Will the XFL make a return under new ownership?

The 2011 collective bargaining agreement (CBA) put game-changing limitations on the intensity and amount of offseason workouts and in-season practice. Teams are limited to a nine-week offseason program and can require players to attend only one three-day minicamp. There is a cap of 10 on-field offseason workouts, and traditional two-a-day training camp practices are banned.

During the season, teams can have only 14 full-pads practices. Players love the freedom and gladly take on the responsibility for their own conditioning. But coaches say they don't have enough time to teach fundamentals, or to train offensive linemen and quarterbacks, in particular. That sentiment has not curbed an accelerating trend of keeping veteran players out of preseason games, a practice that will likely lead to a reduction in preseason games when owners enact their option to expand to a 17-game regular season, if not before.

The 2020 CBA added additional parameters to summer training camp. Teams are limited to 16 padded practices. They are also required to hold a five-day acclimation period at the start of camp. No practice can last more than 2.5 hours, and players can't spend more than a total of four hours per day on the field.

NFL coaches are embracing the spread concepts that have consumed high school and college football, in part by necessity given the limited practice time they would have to retrofit young players to traditional pro schemes.

That has meant a rise in shotgun snaps from 56% of total plays at the beginning of the decade to 79% at the end. It has led to a 36% rise in rushing yards by quarterbacks and a 13% drop in rushing yards by running backs. The average pass is traveling 6% fewer yards downfield. Completion percentage has risen from 60.5% to 64%, in part because there has been a 17% rise in receptions by running backs. Teams still throw more than they run, a longstanding response to league rules that continue to incentivize it, but the path to get there is much different.

Like other pro sports teams around the world, NFL franchises began using GPS technology early in the decade to provide health data and injury prevention during practice. The NFL Players Association offers its own version of biometric monitors to players. In 2014, the NFL inserted radio-frequency identification (RFID) chips into each player's shoulder pads during games. In 2016, chips were inserted into the game balls. The entire process measures speed, distance and other data points.

Teams are still trying to figure out how to use what is now called NFL Next Gen stats, but the figures help demystify the game and give analysts new ways to tell stories, illustrate plays and analyze games.

9. The onset of the streaming era 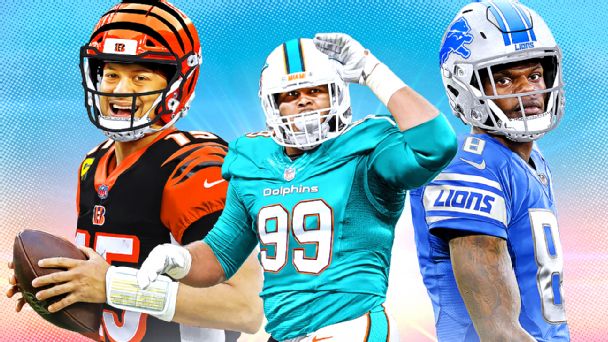 We made every NFL player a free agent, then asked our 32 NFL Nation reporters to re-draft four rounds of high-impact stars with a five-year Super Bowl window in mind. Which team is the best?
• Re-drafted NFL rosters: All 128 picks »
• Experts react » | Stacking the QBs »

The NFL has grown to dominance as a television product, but a late-decade ratings slide coincided with an initial look into internet game distribution. The league has simulcast games on Yahoo, Twitter and, most recently, Amazon Prime with a separate crew of announcers. Television ratings have largely rebounded, while streaming numbers are small but growing.

The real question is whether the NFL will decide anytime soon to grant exclusive rights to a company that will distribute games via internet only. The league's television contracts expire after the 2022 season, a likely flashpoint for any decision on exclusive streaming.

If nothing else, public discussion about football and concussions has turned more productive by the end of the decade. "Concussion" debuted in theaters in 2015, displaying on the big screen just how aggressively the NFL attempted to silence concerns about brain injuries in football during the 1990s and 2000s. The messy and still-unresolved 2013 concussion settlement further demonstrated the depth of negativity.

Since then, there has been a notable shift in tenor. The NFL began releasing annual concussion data in 2012, and by 2017, the number of documented concussions had reached 291. The league hired a full-time chief medical officer, Dr. Allen Sills, and declared a "call to action." It worked with the NFLPA to elevate qualifications for approved helmets, used bioengineering to inform rule changes and strengthened in-game protocols to include injury timeouts and independent neurotrauma consultants at every game. No one knows if science, let alone the NFL, can protect brains from football. But the league's efforts are more visible, and the climate is more conducive to solutions.

Why the NFL's pass interference experiment was doomed to fail

Kevin Seifert reflects on the NFL's decision to nix pass interference review after one season and what it means for the league going forward.

Although they have dismissed proposals to make most calls reviewable, NFL owners allowed a steady increase in both the use of replay and the power of the league office to control it. By the end of the decade, all replay decisions had shifted from referees on the field to the officiating office in New York.

In 2019, the list of reviewable plays crossed over into the highly subjective area of pass interference. Senior vice president of officiating Al Riveron gained the authority to eject players for egregious hits or unsportsmanlike conduct, and he also has limited power to intervene in matters of game administration. Not everyone likes replay, and there is no way to avoid some bad calls. But the NFL's obligation to ensure credible outcomes demands the use of available replay technology. Recent efforts -- including an experiment in taking replays directly from the broadcast truck, rather than the broadcast itself -- suggest the league is preparing for more, not less, replay in the future.