CINCINNATI -- The Cincinnati Bengals have their next franchise quarterback. And the task ahead of him could not be any clearer.

Months of speculation ended Thursday night when the Bengals selected former LSU standout Joe Burrow with the first overall pick in the NFL draft. With this year's event taking place virtually because of the coronavirus pandemic, Burrow celebrated with his family and put on a Bengals hat from his home in Athens County, Ohio.

"That's exactly how I expect to do it as well," Burrow said during a teleconference with local reporters. "I'm going to come in and compete and try to be the best player I can be."

Burrow is coming off a historic season at LSU during which he threw for an FBS-record 60 touchdowns as he led the Tigers to a national championship. He also completed 76.3% of his passes and won the Heisman Trophy.

He inherits a team with an uncertain future at the starting quarterback spot. Veteran Andy Dalton, who has been the team's primary starter since he was drafted in 2011, is entering the final year of his contract. Dalton's $17.7 million salary will put the Bengals over the cap limit.

Taylor didn't want to go as far as naming Burrow as the team's Week 1 starter. Taylor said one of the biggest challenges for Burrow and the rest of the incoming rookie class is adapting to the speed in the NFL, even for players such as Burrow who played at college football's highest level.

"We selected him because we know he's going to be able to handle all of that," Taylor said. "It's just a matter of accumulating those reps as quickly as he can."

The Bengals made their intentions clear well before they drafted Burrow. According to ESPN's Adam Schefter, Bengals president Mike Brown officially welcomed Burrow to Cincinnati on Wednesday when he sent Burrow a letter that said, among other things, that he looks forward "to building championship football teams with you for many years to come." Brown also sent Burrow and his parents No. 9 Bengals jerseys -- which is the number he will be wearing in Cincinnati.

In preparing to compete for the starting job, Burrow said he will have to adjust to missing the mental reps he would have gained during rookie minicamps and OTAs, which have been postponed because of the pandemic. Burrow said the offseason process includes studying the playbook and getting comfortable with calling plays in the huddle.

"You have to be stern in your voice, because if you are in there wavering and wobbling and fumbling over words, all the guys are going to be like, 'What is this guy doing in here, Coach? Get him out. Get someone else in,'" Burrow said. "So, that's something I'm going to be really focused on."

Cincinnati finished 2-14 in 2019, which gave the club the top slot in the first round. The Bengals hadn't been in that position since 2003, when they drafted USC quarterback Carson Palmer with the top overall pick. 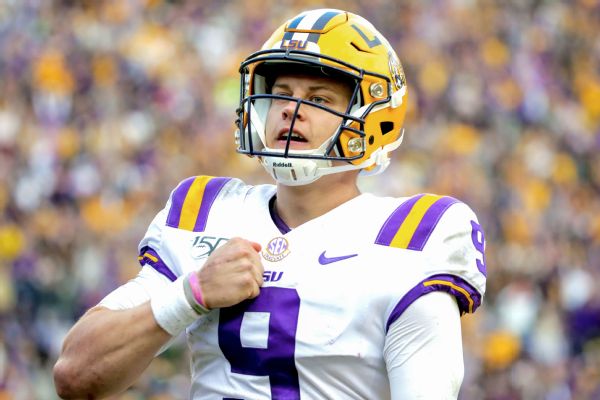 Even though Cincinnati didn't have a private workout with Burrow because of the pandemic, the 23-year-old had plenty of tape from his final season at LSU that showed why he was the first quarterback selected in this year's draft.

In 2019, Burrow threw for 5,671 yards and 60 touchdowns -- the most ever by an FBS quarterback. He led LSU through an undefeated season; the Tigers beat Clemson to win their first national championship since 2007. Burrow's Total QBR of 94.9 led all quarterbacks last season, according to ESPN Stats & Information research.

Burrow and Cam Newton (2011) are the only quarterbacks since 1967 to be the top draft pick after winning both the Heisman and the national championship. Newton capped his collegiate career at Auburn with a national title before being drafted by the Carolina Panthers.

Cincinnati hasn't won a playoff game since the 1990 season, the longest drought in the NFL. The Bengals are looking for their first postseason appearance since 2015.

Burrow is the 318th No. 1 overall pick in NFL, NBA, NHL, MLB, WNBA and MLS history. But he's the first to win national player of the year and a national title, and break a single-season NCAA record in his final college season.

Burrow said he isn't worried about being burdened by the pressure of leading the Bengals back to playoff success.

"I mean for me, it doesn't matter where you get picked," Burrow said. "I could have been 189th pick, I could be No. 1. I'm going to work the exact same and try to be the best quarterback I can be for this city."