Seven selections later, with a pick acquired in the September 2018 trade of Khalil Mack to the Chicago Bears, the Raiders took Ohio State cornerback Damon Arnette.

"We feel like the Las Vegas Raiders got faster, we got tougher and we got more competitive tonight," Raiders general manager Mike Mayock said on a conference call.

In Ruggs, who ran the 40-yard dash in 4.27 seconds at the combine, the Raiders drafted the fastest player in the draft. That the Raiders took Ruggs, with Oklahoma's CeeDee Lamb and former Crimson Tide teammate Jerry Jeudy both also available, was intriguing, though not as initially head-scratching as the selection of Arnette, who was seen as a Day 2 prospect by many observers. 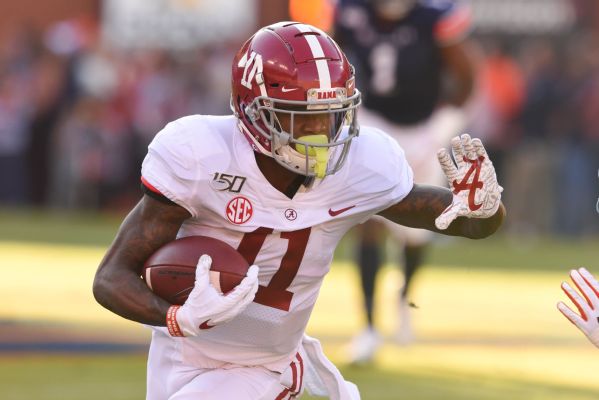 Not that Mayock, coach Jon Gruden or owner Mark Davis cared much for outside opinions.

"Jon and I could not be more pleased," Mayock said. "The coaches are fired up, the scouts are fired up and, trust me, Mr. Davis, when we took the fastest wideout in the draft, Mr. Davis said that his father was looking down and smiling."

That was an obvious reference to the late Al Davis' predilection of building his team with speed. Think James Jett or the late Cliff Branch.

Because while the 5-foot-11 Ruggs' speed was on display at the combine with the fourth-quickest clocking there since 2006, he was also a human-highlight machine at Alabama.

Of Ruggs' 98 career receptions with the Tide, 24 ended in touchdowns, a 24.5% clip that was the best in the SEC in the past 20 seasons (minimum 75 receptions). Some 35% of his catches went for at least 20 yards, the fourth-highest rate among wideouts in this year's draft class (minimum 40 receptions).

Ruggs finished the college season with 40 catches for 746 yards and had only one drop on catchable balls in that stretch. Mayock acknowledged that the Raiders were also intrigued by Lamb and Jeudy.

"The distinguishing factor really was [Ruggs'] speed, his explosion and his work ethic," Mayock said. "When you're in the division we're in and you look at Kansas City and you look at what they have on offense and what their explosion looks like, we needed to get faster and we think that his addition opens up our entire offense.

"He can run the deep routes. He also gets the manufactured touches, the bubble screens, the jet sweeps. I think if you force defenses to roll coverage, it opens up our run game. You respect our deep routes, it opens up [tight end] Darren Waller. I just think it does an awful lot of things for us offensively, and I think the most important thing is I think Coach Gruden and the staff will get everything out of him."

Ruggs, the third-highest Alabama WR drafted in the common era draft behind former Raider Amari Cooper (No. 4 in 2015) and Julio Jones (No. 6 in 2011), joins a Raiders team that needed receiver help. They had the third-fewest receptions (145) and fourth-fewest receiving yards (1,858) by wideouts in 2019.

Ruggs had six catches on go-routes last season, with three of them going for a touchdown. He also caught four slant passes, with three going for a TD, averaging 31.8 yards after the catch per reception on those plays.

Raiders quarterback Derek Carr, meanwhile, averaged a league-low 6.2 air yards per attempt in 2019, while having career highs in passing yards (4,054) and completion percentage (70.4).

"I feel like I'm definitely that guy that can make a positive impact," Ruggs said. "I can help the offense stretch out and be able to do different things.

"My tape speaks for myself, but when I get out on the field, I can show that I can do more than just run."

Ruggs has a 48% chance of becoming a Pro Bowl player, per ESPN analytics, highest of any receiver in the class.

Arnette, though, had just an 0.1% chance of being selected in the first 20 picks, per ESPN's NFL Draft Predictor.

Mayock said last week teams make mistakes in the draft by "reaching for need." And while the pick seemed to reek of that, Mayock insisted the Raiders were always high on Arnette.

"The reason he's not a reach is because of his grade in our system," Mayock said. "Did I think we could have moved down, maybe, and still got him? Maybe, but we didn't want to lose him.

"What distinguishes him is, No. 1, he can run. No. 2, he's tough as nails and when you talk about competitors, he played most of the season with a cast on his arm. He can play inside, he can play outside, he can play left, he can play right. We feel like this is one of the most competitive football players in the entire draft. So, to answer your question, we don't feel, at all, like it was a reach."

"I'd say I'm a physical corner, competitive corner, dog, all the above," said Arnette, whose 96-yard pick-six against Indiana in 2019 is the fourth-longest interception return in Ohio State history.

"And I feel like the Raiders, we're going to do the same thing. We are going to go out there, run fast, hit hard, execute and that's the type of football player I am. Bring some juice, you know what I'm saying? Celebrate your teammates and all that stuff."

Arnette nearly left Ohio State after his junior season but said he wanted to return to "rewrite my legacy" with the Buckeyes. He'll have an opportunity to team with cornerback Trayvon Mullen, a second-round pick last year, to improve the Raiders' pass coverage.

"We wanted to sit there and take Ruggs III at 12 and we did," Mayock said. "We probably could have moved down if we wanted to at 19, but again, we hung in there and we took the guy we wanted to take. So, we did not initiate any trade calls tonight, but we did get several calls."

The Raiders do not have a second-round pick Friday but have three in the third round, at Nos. 80, 81 and 91 overall, and could still use a running back to back up Josh Jacobs, another receiver and a linebacker. Las Vegas also has selections in the fourth (No. 121 overall) and fifth (No. 159) rounds on Saturday.