Rookie quarterback Gardner Minshew threw a pair of first-quarter touchdown passes to lead the Jacksonville Jaguars to a 20-7 victory over the Tennessee Titans on Thursday Night Football. He did a postgame interview on the NFL Network and joined Scott Van Pelt live on SportsCenter.

Minshew was a revelation for the NFL world. But at Washington State, he already had plenty of fans who had gone wild over his mustache, jorts and his locker room workouts with resistance bands wearing only his aviators and a jockstrap -- and sometimes just the aviators.

Minshew is a quirky, funny and eminently likable person who loves to have a good time and doesn't take himself too seriously. (For proof of the latter, check out the clip with Minshew lip-syncing Celine Dion's 1996 hit "It's All Coming Back to Me Now," done for ESPN's Football is Back promo. He really gets into Dion's lyrics.)

That is the way everyone outside the organization views him. Those on the inside, however, see a different version of Minshew Mania. While he still jokes around and laughs with his teammates in the locker room, he's all business when it comes to football.

And that's why, despite not having the strongest arm or being the biggest guy (6-foot-1, 225 pounds), he ranks in the top five in completion percentage (75.4%) and passing TDs (six) among NFL quarterbacks and is in the top 10 in passer rating (115.4) entering another Week 3 Thursday night home matchup, this time against the Miami Dolphins (8:20 p.m. ET, NFL Network).

"I see him as a guy who comes in here every day and prepares like he's an accountant," coach Doug Marrone said. "Which is probably the exact opposite of what you feel because you see him in a different light. And that's a light that I keep turned off, the light that goes outside.

"I have children at home, and they see the same things you guys do and I'm just like, 'Ugh.' They ask me the same questions, I tell them the same answer I give to you, I give to them: I don't know that person. I know the accountant that comes in and works his butt off and tries to get the team and all that stuff. That's what I focus on."

After that Thursday night game, people couldn't get enough of the kid from Brandon, Mississippi. There was a meeting with Uncle Rico of the movie "Napoleon Dynamite" for a piece on ESPN's NFL Countdown. There have been numerous endorsement and sponsorship opportunities, including one from an adult entertainment company that Minshew turned down.

This offseason, he embarked on a partnership with Snickers and Travelcamp, which loaned him an RV for a cross-country trip in January. The latest is a partnership with Bud Light that would reward fantasy football players who drafted him in the first round and if he is in the starting lineup of their league's title game.

Inside the building, though, it's tax season.

The accountant ended up in the black after his rookie season. Minshew, a sixth-round pick in the 2019 draft, outplayed first-round rookie quarterbacks Kyler Murray and Daniel Jones -- Minshew had a better passer rating and threw the fewest interceptions -- and went 6-6 as a starter in 2019. The Jaguars had so much confidence in Minshew heading into the 2020 season that they traded Nick Foles -- the quarterback they had guaranteed a franchise-record $50 million a year earlier -- to Chicago in March and turned the team over Minshew.

This season is his chance to prove he can be the long-term starter so the Jaguars don't need to draft a quarterback (such as Clemson's Trevor Lawrence) in the first round in 2021. Minshew got off to a great start in the season opener, completing 19 of 20 passes for 173 yards and three touchdowns in an upset of Indianapolis. He provided a glimpse of the no-nonsense guy he is in the facility with a short postgame talk in the locker room about not being satisfied with 1-0.

Offensive coordinator Jay Gruden wasn't sure what to expect out of Minshew when the offseason began. All he knew was Minshew had a good senior year at Washington State, played at two other schools and started 12 games for the Jaguars in 2019.

He didn't know about the jorts or the leisure suit he wore for a WSU bowl trip or the time he tried to break his hand with a hammer to try to earn an additional year of eligibility. Or the RV trip, or the flight with the U.S. Air Force Thunderbirds, or that he kind of sounds a bit like Jeff Spicoli in "Fast Times at Ridgemont High."

Gruden said he found out pretty quickly that Minshew is very serious about football.

"I don't hang out with him outside the building, so I really don't know [what he's like away from the facility]," Gruden said. "I don't care. I know that inside the building, when he's here, he's [a] focused individual now. He's got a lot to learn. He knows he has a lot to learn. He works extremely hard with his fundamentals [and] with what we're putting in front of him from a playbook standpoint.

"When he wants to let his hair down, which he has a lot of it, I'm sure he can do that off the field, but I've been very impressed with Gardner as a professional quarterback."

After training camp practices, Minshew took time to talk to tight end Tyler Eifert, who played in Gruden's offense for one year in Cincinnati, to make sure they were in agreement on what they were seeing on the field, and if not, why. If they wanted to do something differently on a play or make a tweak, they'd discuss that, too.

And if he made a bad throw, was uncertain about why a defender acted in a certain way, or threw an interception, he'd talk to players on the defense. He did that with middle linebacker Joe Schobert several times.

"If there's a look that we're giving him and he doesn't quite understand what we're looking for, he'll come up and ask what our thought process was in that certain look versus what they were doing," Schobert said. "He tries to learn from it and turn it into a positive."

Quarterbacks coach Ben McAdoo said he liked that Minshew organized virtual walk-throughs with the players when parts of the country were dealing with coronavirus lockdowns. They'd essentially run plays: Minshew would give a playcall and then he'd ask where everyone is lining up, what their assignment was, and any adjustments they had to make.

"I will call out a play and like, whoever is in for that play will just draw their assignment and we just kind of go around and talk about it," Minshew said. "What are you thinking here? What do you like against Cover 2? How are you running this? I think it is a good way, it is one thing to learn it on paper but to hear the call and then know what to do right there, I think it has been a good way to make the best of a bad situation."

In 2019, Minshew was a rookie trying to figure out what he was doing and make the transition from college to the NFL. This summer, tight end James O'Shaughnessy saw the difference pretty quickly.

"I have stories about how he in the offseason when we're learning plays and doing our own little walk-throughs at random outdoor fields to get some type of work in, simulate OTAs, and he's having to refrain from cussing me out because I messed up the play we installed earlier, or him correcting me for complaining about one thing or the other," O'Shaughnessy said.

"He's fun and he likes to joke around with [the media], but when it comes to ball and about the severity of the seriousness of what we do, he doesn't take that lightly, and that's a sign of an ultimate competitor.

"I can't say enough about the kid. I love him."

He's apparently not the only one. Defensive end Josh Allen, the team's first-round pick last year, had to force himself to stop raving about Minshew. He said everyone knows there's much more to him than headbands, cutoff shirts and a laid-back attitude.

"In my eyes, I do believe Gardner is a superstar," Allen said."He's a great quarterback. I feel like he's shown that many times and he's going to continue to show that. He has the whole team, the whole organization behind him.

"He has the look, he has the swag, he has the arm and he has the plays to make -- to be who I consider a great quarterback in the NFL. That's my guy."

"I see him as a guy who comes in here every day and prepares like he's an accountant. Which is probably the exact opposite of what you feel because you see him in a different light. ... I don't know that person. I know the accountant that comes in and works his butt off and tries to get the team and all that stuff." 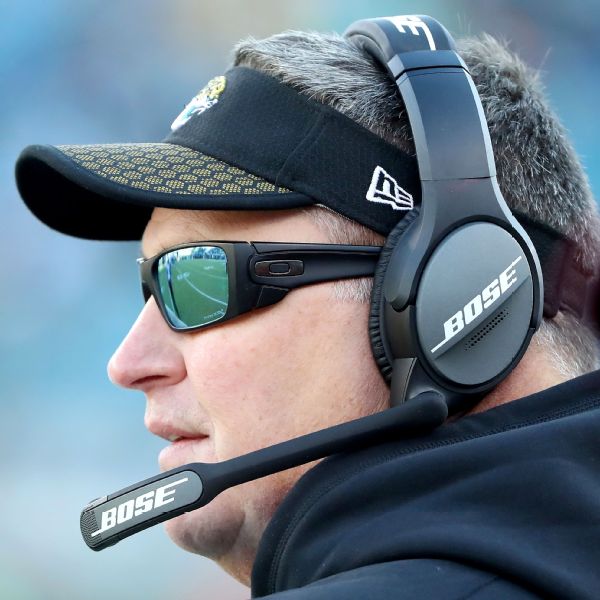 Mike Leach coached Minshew for one season at Washington State and was impressed with how easily Minshew flipped the switch from the fun-loving guy who taped a mustache to Leach's lip during an interview to 100% focused on football when practice began.

He said he's also seen that from a couple of guys who ended up in the Pro Football Hall of Fame.

"He [Minshew] was bigger than life, then all of a sudden, he hit the field -- now he's going to still have fun -- but it was business," said Leach, now the coach at Mississippi State. "I had the opportunity to watch the Cowboys at some of their practices and stuff like that and I don't know Michael Irvin at all. I know Deion [Sanders] a little. Both of those guys were bigger than life. At least the practices I was at, it was business. When they were on the field until it was over, it was intense, how hard they practiced."

That's how Minshew wants to be viewed. The public sees a frat boy off the field, but he's a graduate student on it.

"It's where your feet are," Minshew said. "If I am here in the building, it's all I can do until they tell me I have to leave, and I'm going to give it all I have here. And if I can't be in here, then I am going to figure out how I can get better at home and how I can participate from home."