Editor's note: This story originally ran on Jan. 12, 2021. The story has been re-published ahead of the Chiefs' appearance in Super Bowl LV.

KANSAS CITY, Mo. -- While experimenting during a break at Kansas City Chiefs practice earlier this season, Patrick Mahomes got the idea to go in motion before returning behind center to receive the snap.

Mahomes later went to coach Andy Reid with an unconventional idea for a play using the quarterback in motion. The next thing Mahomes knew, Reid and the offensive assistants made the Mahomes pre-snap motion into a play and put it in the offensive plan for a midseason game against the Carolina Panthers.

The Chiefs used the play, which they call Ferrari Right, and it resulted in a 1-yard touchdown pass from Mahomes to Demarcus Robinson.

Showtime to Honey Thunder for our first touchdown of the game 🙌#CARvsKC on FOX pic.twitter.com/KPtNkCjo50

The Chiefs now have a Ferrari package of plays with Mahomes in motion. And they have a whole collection of interesting red zone plays, many of the ideas originating with coaches but some with players.

The names of the plays reflect their fun nature and give the players some ownership in the offense.

"[Mahomes has] had ideas, we've used other players' ideas, and I'm free game [to ideas]," Reid said. "If you've got a good one, let's go. If you've got one, bring it on. We'll take it. I'm easy that way. If they look good, we'll try it on and see how it works, but I think it's healthy. I think it's healthy for guys. They're thinking football, which is important, and you hope that your guys are in the frame of mind to do that.

"It keeps the guys alive. It keeps everybody involved. They get into those. This is a serious business. They're grinding away and there's a lot of hours put in, so you give the guys a little something. You want it to be a good play. We're not making a mockery of the thing. We're trying to make it where it's another opportunity to score a touchdown."

Many of these plays have resulted in a touchdown. The Chiefs scored one against the Baltimore Ravens on a pass to tackle Eric Fisher, who had lined up in an eligible position. The play's name? Catch and Release -- a play on Fisher's last name.

They scored another touchdown in the same game on a shovel pass from Mahomes to fullback Anthony Sherman. The play is called Smoked Sausage -- a nod to Sherman's nickname "Sausage."

Some haven't worked, mostly due to a lack of proper execution rather than a lack of creativity. Black Pearl, so named because the Chiefs used it against the Tampa Bay Buccaneers, is a double reverse that would have resulted in a touchdown pass from Kelce to Mahomes if the tight end had decided to run the ball. Instead, his pass was ineffective and incomplete.

Mahomes' third TD of the game ⏰🏹#NYJvsKC on CBS pic.twitter.com/RWpXx1XNkg

"If I kind of have an idea, we usually get it in [the playbook]," Mahomes said. "But there will be a lot of times where [Reid] kind of tweaks it to make it more custom to the offense and basically make it work, is the best way to say it. I'll come up ideas of plays I'm trying to do and try to get guys in certain places and against certain coverages, and then he goes and details it up and makes it work within a game." 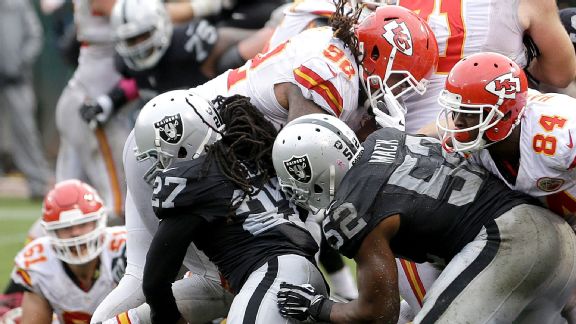 Ferrari Right is an example.

"There's a time when we're kind of doing like a walk-through for the defense. In that walk-through he kind of gives us a little opportunity to do little stuff that we can try out, and I did it and I think he liked how it looked there," Mahomes said.

"You have to show him. He has to see proof of it working in a live situation before he's going to put it in there."

Reid said, "The [previous] three weeks Pat has been messing around with it. I told him, 'Listen, we're going to put it in [the game plan],' and he looked at me like I was crazy. He had been doing it [in practice] and it looked good. So if it looks good, let's try it.

"You've seen enough plays. You have a pretty good feel for what times up right. If I see it, I can normally go with it if I like it, if it fits. That play worked out well. It timed up well. We had enough guys that had a chance to catch the ball and we had a center that felt comfortable snapping it. Patrick and the guys, they go over during special-teams [periods during practice] and work on these crazy things when they get a minute, and that one caught my eye."

Linemen often get to be the stars in these creative and cleverly named plays. A defensive tackle, 345-pound Dontari Poe, scored a touchdown in a 2016 game for the Chiefs on a play named Hungry Pig Right.

Poe later that season threw a jump pass for a touchdown on a goal-line play against the Broncos that Reid referred to as a "Bloated Tebow Pass."

This year, Fisher has a touchdown. The Chiefs planned to throw to another offensive lineman, Mike Remmers, when they were close to the end zone against the Panthers. The play was spoiled and a likely touchdown lost when Carolina was penalized for holding Remmers as he was getting into his route.

"I've been playing football since the second grade," said Remmers, in his ninth NFL season. "I've never caught the ball. I've never got a yard. I never scored a touchdown or anything.

"I got a [defensive holding penalty]. I can add that to my list of stuff now. It was pretty awesome to be able to run a route."

The Chiefs have a drill in every Friday practice during the season in which the offensive linemen get to run routes and catch passes. The drill is mostly for fun and to lighten the grind for the linemen, but Reid and the offensive coaches are also watching to see which linemen might have the offensive skills to help as a receiver on a gadget play during a game.

"You've just got to look around and make sure a guy can do certain things when they're messing around out there before practice starts," Reid said. "You see one that you think has a little talent, then you use him.

"We've seen that [Remmers] can catch and he has a pretty good feel for that play.

"The guy grabbed him and kind of tackled him there. ... I told Remmers he should be proud of that, that they paid that much attention to him. Normally for offensive linemen that doesn't take place, but it did on that play."

Catch and Release was the idea of offensive coordinator Eric Bieniemy. He has been pestering Reid to call the play during a game.

But usually that's not required. All it usually takes is an idea and a funny name.

"We have a very, very creative group of people in this building that can come up with a variety of names," Bieniemy said. "We keep it fun. The guys embrace it. They make it fun as well, because when you give them those particular plays, they take ownership in it and they want it to work.

"We'll keep the flexibility going with these particular plays. And just to let you know, there are plenty left [in the playbook]."