GREEN BAY, Wis. -- It's not an arduous task to watch all of Green Bay Packers quarterback Aaron Rodgers' career interceptions. There are only 89 of them over 16 NFL regular seasons, and the technology is readily available.

There's one, however, that seems to have escaped the permanence of NFL Game Pass (whose archives only go back to 2009), ESPN.com's own video database and even the infinitude of YouTube.

It's career interception No. 7 from way back in 2008, Rodgers' first season as a starter.

No need for video, however, when Rodgers can describe exactly how then-Chicago Bears linebacker Brian Urlacher got him.

"He duped me," Rodgers recalled for ESPN on New Year's Eve as he drove home from Lambeau Field. "He kind of no-looked me. He looked like he was going to come down, and then he wheeled up and made a nice play on the ball down the seam. It wasn't a great throw by any means, but he was messing with me on that one."

Rodgers might not be able to recount all 89 of them in such detail, but his recall, even while driving home -- with a stop to pick up a bottle of Dom Perignon along the way -- says two things: how much interceptions stick in his craw and how few he has thrown.

When he reached 400 career touchdown passes in Week 13 of this season, Rodgers had thrown just 88 interceptions. Not only was he the fastest to 400, beating Drew Brees by 12 games, he was the only one who had fewer than 100 interceptions at the time he reached the touchdown milestone.

He said he's going to see if he can get to 500 before he throws his 100th pick, and he actually believes it's possible.

"I meant it when I said it," Rodgers insisted.

"Both numbers are equally impressive," said ESPN analyst Matt Hasselbeck, who threw 212 touchdowns and 153 interceptions during his 17-year NFL career. "To have longevity in the NFL at the quarterback position for a decade-plus, a phrase I believe in is this: 'Ball security is job security.' That is one of the many reasons that Aaron is consistently viewed as one of the best in the game."

For most of his career, Rodgers held the NFL record for touchdown-to-interception ratio. He's at 4.63-to-1 but now trails the Chiefs' Patrick Mahomes (4.75).

Rodgers still owns the NFL record for consecutive passes without an interception at 402 -- a streak that ended with career interception No. 80 by Chicago's Eddie Jackson on a ball that went off the hands of tight end Jimmy Graham in the end zone in Week 15 of 2019.

Rodgers also had a streak of 251 straight regular-season passes without a pick. Interception No. 73 ended that in Week 1 of 2017 against the Seahawks, when defensive lineman Nazair Jones picked off a screen pass.

"That actually was my very first snap in the league," Jones said, laughing. "That's what's pretty crazy about it. He actually hit me in the face with the ball. The point of the ball hit me in the eye. It was swollen and then like the whole bottom of it was bloodshot for a couple of months."

Jones is one of two players whose only career interception came against Rodgers. When asked if he could name either of them, Rodgers was initially stumped.

"Is Chase Blackburn one of them?" Rodgers said.

Blackburn had interception No. 37 in Week 13 of 2011, when the Giants linebacker dropped into coverage. That was one of his four career interceptions.

"Well, one of them is the kid from Seattle on the screen," Rodgers then remembered, referring to Jones.

When told the other was interception No. 4 in Week 4 of 2008 against the Buccaneers, Rodgers immediately recalled the circumstances.

"Oh yeah, when we were coming back, [but] I don't remember who that was," Rodgers said, forgetting that it was defensive tackle Gaines Adams, who died in 2010 of cardiac arrest.

He instantly named Urlacher as one of them; after thinking for a few seconds, he added: "I know [another] one of them, and it's amazing, Bacarri Rambo got [me] twice," he said referring to interception Nos. 56 and 57 against the Bills in Week 15 of 2014. 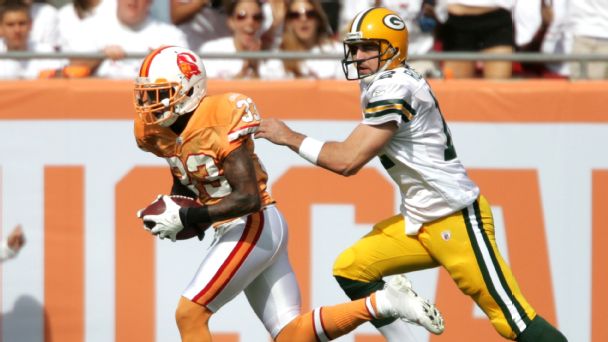 Rodgers: "I hit James [Jones] on that [74]-yard touchdown [against Mack] and then came back and had Greg [Jennings] on the same sideline against Cover 2 for a holeshot touchdown, and I decided to throw the back side -- which we talked about all week in practice not to throw -- and I threw a pick on the back side. That one still pisses me off."

Why it's memorable: The pick became a GIF of Rodgers throwing the tablet on the ground after seeing that Randall Cobb was wide open in the end zone.

Rodgers: "I hate that one because I didn't like the playcall. ... It was terrible leverage for the play, and of course [it's] a play that doesn't look like it's going to be open; I get off [Cobb] right away, and [two defenders] run into each other and fall down [and Cobb is wide open]. That one definitely pisses me off."

When told two players other than Rambo also got him in the same game, it jogged Rodgers' memory.

"Oh yeah, [former Packers receiver] Greg [Jennings] slipped on the one, and I drilled him on the sideline [on the other]," Rodgers said of interceptions Nos. 8 and 9 in Week 12 of 2008 by Jason David of the Saints.

When told that Janoris Jenkins of the Giants got him twice (Nos. 67 and 68 in Week 5 of 2016), he said: "Oh, the deflection [off then-Packers receiver Jordy Nelson's hands], and then he got the other one."

"Tim got me twice?" Rodgers said with surprise in his voice. "I remember one in '13. I don't remember the second one."

When told Jennings undercut a route by James Jones in 2012, Rodgers immediately said: "Oh my god, it was on the sideline on a shake route."

Of Rodgers' 89 picks, 24 were tipped -- 14 were off the hands of receivers and 10 were deflected by a defender or by the body part of a Packers player.

Even counting the playoffs, where Rodgers has 40 touchdowns and 12 interceptions in 18 starts, only Urlacher has gotten Rodgers three times.

Rodgers discovered early on how much coaches hated interceptions.

As the JV quarterback his sophomore year at Pleasant Valley High School in Chico, California, Rodgers had a bad stretch of picks.

Enter Ron Souza, the offensive coordinator on the JV team that season.

"I think he felt at that time I would play better knowing if I kept turning the ball over that I would be benched, even though there's no way I would've been because there wasn't a guy behind me who could play," Rodgers said. "But it was just his way of motivating me and saying, 'Hey, this isn't good enough, if you don't start figuring this thing out, we're going to go with somebody else.'"

Souza told Rodgers that 90% of interceptions occurred because of poor pre-snap reads, so the first thing Rodgers needed to do was master what opposing defenses wanted to do.

"He has a photographic memory, and when you look at quarterbacks, ideally you want that," Souza said. "If you know what they're in, you've reduced your chances for an interception to 10%."

That 10%, Souza believes, comes down to not forcing a throw. And that's where Rodgers ran into trouble as a sophomore.

"Pre-snap everything was right, but he was trying to force it," Souza said. "So literally we pounded it daily, and that's really what happened. Since an early age, that's been pounded into him."

Rodgers' goal always was to play college football. When he looked at statistics of quarterbacks on Rivals' 100 list -- the only recruiting source he knew at the time -- he noticed a pattern.

"All these dudes had a ton of touchdowns and not a lot of interceptions, and I was thinking that's the one thing I've been doing that other guys haven't -- and that's throwing too many interceptions," Rodgers said. "Then by my senior year I took care of the ball a lot better. I don't remember exactly how many touchdowns I finished with, but my interceptions were way down."

At Butte College, his only season at the junior college, Rodgers threw 28 touchdowns and just four interceptions. At Cal, he threw five picks his first season and eight his second before he entered the NFL.

Former Packers quarterbacks coach/offensive coordinator Tom Clements' words came to mind when Rodgers threw his most recent interception in Week 16 against the Titans.

Interception No. 89 broke one of the first rules Rodgers ever learned, and he knew it immediately.

"All I was thinking about was Tom Clements' voice in my head going late down the middle, one of the QB mortal sins that I broke," Rodgers said after that game.

He actually broke two of them: late down the middle and throwing across his body.

"When he actually threw that pick, I can't remember what he shouted out, I think it was an expletive, but he knew right away when that ball left his hand," Packers center Corey Linsley said. "I don't know what happened, but he knew what the end result was going to be, right as it left his hands, and it's just, he gets upset about it."

Access elite coverage for every fan: highlights of the biggest games, original series from NFL legends, unprecedented analysis and more. Sign up now to unlock everything ESPN+ has to offer.

Rodgers remembers what he shouted.

"I think it was probably 'F---,' which is one of the easier [ones] to say," he said. "I was pissed at myself because I know it's a mortal sin that I grew up learning in the league and also just unnecessary at the time, up 33-14, moving out to my right, either dirt that one or run it or throw it away and we're punting.

"Our defense is playing well. Just an unnecessary momentum swing. One of those flash throws that I've made before but really very lower-percentage play for me. I just don't make a lot of those plays, which is why I was pissed."

Last week, Rodgers appeared on a SiriusXM NFL radio show co-hosted by former Packers quarterback Brett Favre. On the air, Favre told Rodgers: "You're breaking all my records and breaking my heart in the process."

Just two weeks after Favre set the NFL's touchdown pass record (one Tom Brady now owns at 581), he set the record for most career interceptions (one Favre still owns at 336).

Rodgers saw Favre's worst interception season firsthand. He was a rookie in 2005 when Favre threw a career-high 29 picks.

"It was definitely very interesting watching that year," Rodgers said of an injury-filled 4-12 season after which coach Mike Sherman was fired. "Favrey was playing the way he always played where he's going to take chances, and we were trying to come from behind in so many of those games that it was a tough year."

Rodgers never saw Favre's worst interception game -- a six-pick debacle (three of them returned for touchdowns) in a 2001 NFC divisional playoff loss at the Rams after which Favre famously said: "I could have thrown eight if we had gotten the ball back."

"The thing that stands out to me is I've always prided myself on keeping them low but also keeping the opportunities low," Rodgers said. "I don't feel like I've had a ton of legit dropped picks, where it's like guys should catch a pick and drops it. There's the one from 2018 that [Chicago's Kyle] Fuller, I hit him in the chest when it was legitimately a P.I. and they didn't call it. I just ... feel like there's not many of those over the years."