For years, the only hope for a Tom Brady-Aaron Rodgers meeting was the Super Bowl. The one time Rodgers made it, Brady's New England Patriots got knocked out by the New York Jets -- the Jets! -- in the divisional round following the 2010 season.

They have been in the same postseason nine times, but they never met.

All it took was Brady's move to the NFC this season, and here they are. Brady and the Tampa Bay Buccaneers versus Rodgers and the Green Bay Packers at Lambeau Field for the right to go to the Super Bowl (3:05 p.m. ET Sunday, Fox).

"I remember when I heard the news about him coming to the NFC, I thought this was a real possibility," Rodgers said this week. "And I'm excited about the opportunity to play against him one more time."

If they couldn't meet in a Super Bowl, this is the next best thing, considering how much they have in common -- other than Super Bowl titles, of course.

They're among the most efficient quarterbacks in NFL history. Rodgers has eight seasons with 4,000 yards passing and fewer than 10 interceptions. Brady has six. No one else has more than two in NFL history.

Rodgers, 37, will make his fifth conference championship start and Brady, 43, his 14th.

They met earlier this season in Week 6 -- just their third time in the regular season. Now, they finally meet in the postseason.

Best chance to meet in playoffs before this year

2011 season: The Packers were the defending Super Bowl champs in 2011 and backed that up with a 15-1 regular season. The Patriots were 13-3 and the No. 1 seed in the AFC. New England did its part, sneaking past the Ravens in the conference championship game, but the Packers got bounced in the divisional round by Eli Manning and the Giants, who went on to beat the Patriots in Super Bowl XLVI.

2014 season: Three years later, the Packers found themselves up 16-0 in the second half of the 2014 NFC title game at Seattle and still led by 12 when Morgan Burnett's interception gave them the ball back with five minutes to play -- a lead they blew and then lost in overtime. The Patriots beat the Seahawks in Super Bowl XLIX.

2016 season: Two years after that, the Packers were 4-6 and then ran the table -- as Rodgers said -- all the way to the NFC Championship Game. But they got rolled by the Falcons, who went on to blow a 28-3 third-quarter lead against the Patriots in Super Bowl LI.

Brady: 34 completions on passes of 20 or more air yards. There was so much talk this offseason about whether Brady had the arm strength to execute Bruce Arians' high-flying "No Risk it, No Biscuit" offense. It was such a stark contrast to the dinking and dunking he did in New England. But Brady's 34 completions on passes of 20-plus air yards led the NFL. That was also a career high. Equally impressive: Brady attempted 21 more of those throws than the Chiefs' Patrick Mahomes, and their completion percentage was nearly identical: Mahomes' was 38.8% and Brady's was 38.6%. -- Laine

Rodgers: 412 touchdowns and 89 career interceptions. When Rodgers reached 400 touchdown passes this season, he had thrown just 88 career picks -- easily the fewest by any quarterback at the time of his 400th TD pass. That's an average of just under seven interceptions over the 13 years he's been a starter. However, Rodgers has thrown more interceptions (nine) than touchdowns (eight) against the Buccaneers, the only team to hold that distinction over Rodgers. That includes two picks in the Week 6 38-10 loss to the Bucs, including one of only three career pick-sixes Rodgers has ever thrown (two of which have come against the Bucs). -- Demovsky

Biggest challenge this season to get here

Brady: No offseason work meant little time for Brady to jell with teammates and collaborate with Arians. Many times throughout the season, the offense looked disjointed and the secondary couldn't pull its weight. By season's end, the Bucs had beaten only one team with a winning record -- the Packers in Week 6. They got swept by the New Orleans Saints with a 46-point differential, and lost by three points each to the Los Angeles Rams and Chiefs in Weeks 11 and 12. They won four straight to close out the season, clinching the NFC's fifth seed in the playoffs, but those wins were against teams that finished the year a combined 20-44. -- Laine

Rodgers: Injuries to his offensive line. The Packers had one of the best offensive lines in football with a pair of All-Pro selections -- left tackle David Bakhtiari and center Corey Linsley. Bakhtiari missed three games because of broken ribs in the middle of the season and then was lost for good to an ACL tear the week of the regular-season finale. Linsley missed three games to a knee injury. That all came after starting guard Lane Taylor blew out his knee in the season opener and was lost for the year. Through it all, Rodgers was sacked just 20 times and never appeared on the injury report or was even limited for a single practice. After Saturday's win over the Rams, he called the play of the line "stellar" and he singled out Billy Turner -- who played right guard and both tackle spots this season -- as an unsung hero. -- Demovsky

What's at stake on Sunday

Brady: He took perhaps the biggest professional risk of his career by coming to Tampa Bay, a team that hadn't been to the postseason in 13 years before his arrival. The fact that the Bucs are even here, playing in the NFC Championship Game, is so illogical and absurd, with no offseason and being a road wild-card team. But Brady won't be content if it ends here. He wants a seventh Super Bowl title and he wants to cement his legacy as the greatest quarterback of all time. Many have tied his success over the years to Bill Belichick and the Patriots' system. Critics have pointed to his age and said he wouldn't be able to function in Arians' downfield passing attack. Brady is grateful for his time in New England, but this has been his chance to get out from under that. -- Laine

Rodgers: Everything Rodgers has done gets compared to Brett Favre. Rodgers is about to tie Favre in MVPs, assuming Rodgers wins No. 3, as expected. He's tied with Favre in Super Bowl wins (one), but Favre at least got to a second Super Bowl, and his appearances came in back-to-back seasons. Rodgers would have the longest gap between Super Bowls by a quarterback in NFL history if he made another one (nine seasons). Rodgers is the only multiple winner of the MVP award who hasn't appeared in multiple Super Bowls/NFL championships. -- Demovsky

Why each QB should be confident about his chances

What's At Stake For Tom Brady 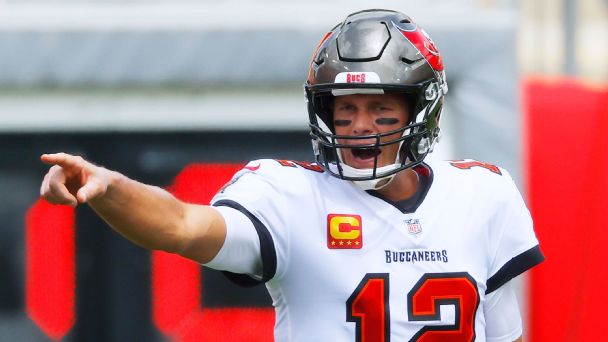 Brady: They've beaten the Packers already this season. Defensive coordinator Todd Bowles is coming off one of his best-called games ever, and their secondary -- this team's Achilles' heel -- had arguably its biggest game of the season against New Orleans. The Saints eliminated their downfield passing attack with such tight coverage on Bucs receivers, but the Tampa Bay defense forced four turnovers and held Drew Brees to just a 57.1% completion rate. Temperatures are forecast to be in 20s Sunday, which would seem to favor the Packers, but Brady is 34-8 in the regular season and postseason when the game-time temperature is 32 degrees or lower. The Bucs seem to have found something in their one-two punch of Ronald Jones and Leonard Fournette on the ground. They also have another receiving weapon now in Antonio Brown, who wasn't on their roster in Week 6. He led the Bucs in targets in the final five weeks of the season, although his status is up in the air with a knee injury. -- Laine

Rodgers: Should Rodgers be? If it were any other team, then his confidence should be off the charts, given that the Packers were the top-scoring offense in the NFL and last week against the top-scoring defense in the league, they put up 32 on the Rams in the divisional playoff round. But consider what the Bucs did to him in Week 6. Up 10-0, Rodgers' pick-six (by Jamel Dean) opened the floodgates. The Bucs' speedy inside linebacker combination of Lavonte David and Devin White dominated the game. Rodgers was sacked four times, one of only two games this season that he was sacked more than twice. -- Demovsky

What is their outlook for 2021 and beyond?

Brady: Brady will be in the second year of a two-year deal worth $50 million. Arians enters his third year of a five-year deal, with sources telling ESPN he's "having the time of his life" coaching Brady. The organization is fully committed to giving Brady what he needs. Tight end Rob Gronkowski has already pledged to return next season. Brown and Fournette have stated how much they love being part of this team. The Bucs will have $30 million in salary-cap space, and they'll also need to re-sign receiver Chris Godwin to give Brady his full arsenal of weapons, in addition to outside linebacker Shaq Barrett and David. If they can get those key players back, they could most certainly exceed what they've done this season. -- Laine

Rodgers: In his own words, Rodgers' future is "a beautiful mystery." It would be impossible to imagine the Packers dumping Rodgers after a season like this, but how many more years does he have in Green Bay now that Jordan Love is in town? Perhaps Love will become what Jimmy Garoppolo was to Brady in New England: trade bait. Brady turned 37 when Garoppolo was a rookie in New England, and Brady outlasted him there. Rodgers turned 37 last month. He admitted that the Packers' decision to draft Love meant he might not be able to leave Green Bay on his own terms, but he should have at least another year -- and another run at a Super Bowl -- around here. -- Demovsky