"What's up people?" Nassib posted. "I'm at my house here in West Chester, Pennsylvania. I just want to take a quick moment to say that I'm gay. I've been meaning to do this for a while now, but I finally feel comfortable enough to get it off my chest. I really have the best life, I've got the best family, friends and job a guy could ask for.

"I'm a pretty private person so I hope you guys know that I'm really not doing this for attention. I just think that representation and visibility are so important. I actually hope that like one day, videos like this and the whole coming-out process are just not necessary. But until then, I'm going to do my best and do my part to cultivate a culture that's accepting, that's compassionate and I'm going to start by donating $100,000 to the Trevor Project." 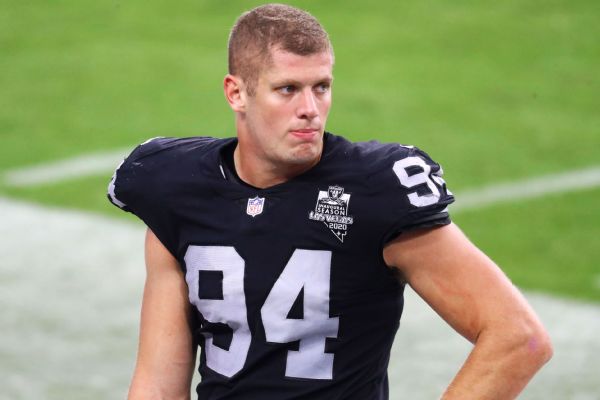 • 3rd-round pick of Browns in 2016 NFL draft
• 20.5 career sacks in 73 games (37 starts) for the Browns, Buccaneers and Raiders
• Signed 3-year contract with Raiders in March 2020
• Recorded 1st career interception in Week 10 of 2020 vs. Broncos
• Won the Lombardi Award as the best college football lineman/linebacker in 2015 while at Penn State
• Big Ten Defensive Player of the Year in 2015

The Trevor Project provides crisis intervention and suicide prevention services to the LGBTQ+ community. It commended Nassib's announcement, saying in a statement that his donation will help it "scale our life-saving crisis services to reach the more than 1.8 million LGBTQ youth who seriously consider suicide each year in the U.S."

Said Nassib: "They're an incredible organization, they're the No. 1 suicide-prevention service for LGBTQ youth in America. And they're truly doing incredible things. And I'm very excited to be a part of it, help in any way that I can and I'm really pumped to see what the future holds."

Reaction to Nassib's announcement was immediate throughout the NFL and sports world overall.

In a statement, NFL commissioner Roger Goodell said the league "is proud of Carl for courageously sharing his truth today."

"Representation matters," Goodell said. "We share his hope that someday soon statements like his will no longer be newsworthy as we march toward full equality for the LGBTQ+ community. We wish Carl the best of luck this coming season."

NFL Players Association executive director DeMaurice Smith added: "Our union supports Carl and his work with the Trevor Project is proof that he -- like our membership -- is about making his community and this world a better place not for themselves, but for others."

After Nassib's announcement, Raiders owner Mark Davis told ESPN: "It's 2021. All the more power to Carl. It doesn't change my opinion of him as a person or as a Raider." Coach Jon Gruden added via text message to ESPN: "I learned a long time ago what makes a man different is what makes him great."

Proud of you, Carl 🖤 pic.twitter.com/R9aJxYFefW

James Franklin, Nassib's former coach at Penn State, said, "Carl's brave announcement will forge a path for others to be true to their authentic self. I was proud of Carl when he led the nation in sacks, but I'm even more proud of him now."

GLAAD, an LGBTQ advocacy organization, called Nassib's announcement "a historic reflection of the growing state of LGBTQ visibility and inclusion in the world of professional sports."

"... Carl Nassib's story will not only have a profound impact on the future of LGBTQ visibility and acceptance in sports, but sends a strong message to so many LGBTQ people, especially youth, that they too can one day grow up to be and succeed as a professional athlete like him," GLAAD president and CEO Sarah Kate Ellis said in a statement.

Nassib joined the Raiders in 2020 as a free agent on a three-year, $25 million deal, with $16.75 million guaranteed. He had 2.5 sacks and an interception in 14 games, with five starts, for Las Vegas last season.

A third-round pick of the Cleveland Browns in 2016, Nassib also played two seasons with the Tampa Bay Buccaneers before joining the Raiders. He came to national attention as a star of the Browns' "Hard Knocks" appearance in 2018, giving financial advice to teammates and offering his take on the existence of aliens.

Former Missouri linebacker Michael Sam became the first openly gay player to be drafted in NFL history in 2014, when the Rams took him 249th overall. He was cut by the team at the end of training camp that year and never played a regular-season game in the NFL.

Ryan Russell, a free agent at the time after playing three seasons between the Dallas Cowboys and Buccaneers, came out as bisexual in a story published by ESPN in 2019.