Brian Flores has sued the NFL and three teams -- the Dolphins, Broncos and Giants -- alleging discrimination regarding his interview processes with Denver and New York and his firing last month by Miami.

Flores alleges that Dolphins owner Stephen Ross attempted to incentivize him to "tank," or purposely lose games, shortly after he was hired in 2019, with Ross allegedly offering Flores $100,000 for every loss that season. Flores says that as the team won games late in the season, Dolphins general manager Chris Grier told him Ross was "mad" that the on-field success was "compromising [the team's] draft position."

Additionally, Flores alleges that Ross pressured him into recruiting a "prominent quarterback" at the end of the 2019 season, which the coach refused so as not to violate the NFL's tampering rules. Ross then allegedly invited Flores onto a yacht for lunch in the winter of 2020, where he informed him that the quarterback was "conveniently" arriving at the marina for an impromptu meeting.

Flores refused the meeting and left the yacht. Afterward, Flores alleges he was "treated with disdain and held out as someone who was noncompliant and difficult to work with." 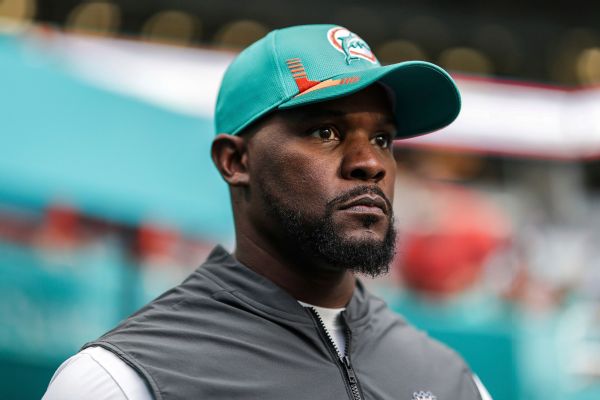 Flores also alleged that the Giants interviewed him last month for their head-coaching vacancy for no other reason than compliance with the NFL's Rooney Rule, which requires teams to interview minority candidates for their open positions. The league has amended that rule in recent years and now says teams must hold an in-person interview with at least one external minority candidate for any general manager or head-coach opening.

Flores alleged he spoke with the Giants via Zoom on Jan. 18, prior to the team hiring former Buffalo Bills assistant general manager Joe Schoen as its GM on Jan. 23. He said that the next day Schoen finalized his interview date for Jan. 27, and Giants co-director of player personnel Tim McDonnell texted Flores, saying he hoped he would "come in and win the f-ing job."

However, hours later, Flores' lawsuit alleges, he received a series of text messages from Patriots coach Bill Belichick, under whom Flores worked for 10 years in New England. In those texts, Belichick told Flores he had heard from "Buffalo and NYG that you are their guy."

Flores asked Belichick to clarify whether he meant to talk to him or Brian Daboll, who was also in the running for the Giants' job. Belichick acknowledged his error and informed him that the Giants wanted Daboll.

"Sorry -- I f---ed this up. I double checked and misread the text. I think they are naming Brian Daboll. I'm sorry about that," Belichick allegedly texted.

Flores alleges that his Jan. 27 interview with the Giants -- which satisfied the Rooney Rule, because he was the first minority candidate to interview in-person -- was a "sham." New York hired Daboll, the former Bills offensive coordinator, a day later.

Flores alleges that a similar scenario occurred when he interviewed with the Broncos for their head-coaching job in 2019. Flores says that then-Denver general manager John Elway, among others, arrived to the interview an hour late and hungover -- alleging they had been "drinking heavily the night before."

The Giants, Dolphins and Broncos responded separately to the allegations Tuesday.

The Giants said they were "pleased and confident" with their hiring process.

"We interviewed an impressive and diverse group of candidates," the team said. "The fact of the matter is, Brian Flores was in the conversation to be our head coach until the eleventh hour. Ultimately, we hired the individual we felt was most qualified to be our next head coach."

The Dolphins "vehemently" denied the allegations against them" while noting they are "proud of the diversity and inclusion throughout our organization."

"The implication that we acted in a manner inconsistent with the integrity of the game is incorrect," the team said.

And the Broncos detailed their Jan. 5, 2019, interview with Flores, saying it started promptly at 7:30 a.m. in Providence, Rhode Island, lasted 3½ hours and was conducted with five team executives.

"Pages of detailed notes, analysis and evaluations from our interview demonstrate the depth of our conversation and sincere interest in Mr. Flores as a head coaching candidate," the team said. "Our process was thorough and fair to determine the most qualified candidate for our head coaching position.

"The Broncos will vigorously defend the integrity and values of our organization -- and its employees -- from such baseless and disparaging claims."

In the lawsuit, Wigdor Law LLP, the firm representing Flores, said the coach hopes to "shine a light on the racial injustices that take place inside the NFL." Among the areas Flores said he would like to see addressed:

• Increase "the objectivity" of hiring/terminating GMs, head coaches and coordinators

• Increase the number of Black coordinators

The lawsuit seeks unspecified damages from the NFL, which called the claims "without merit" Tuesday.

"The NFL and our clubs are deeply committed to ensuring equitable employment practices and continue to make progress in providing equitable opportunities throughout our organizations," the league said in a statement. "Diversity is core to everything we do, and there are few issues on which our clubs and our internal leadership team spend more time. We will defend against these claims, which are without merit."

"God has gifted me with a special talent to coach the game of football, but the need for change is bigger than my personal goals," Flores said in a statement put out by the Wigdor firm. "In making the decision to file the class action complaint today, I understand that I may be risking coaching the game that I love and that has done so much for my family and me. My sincere hope is that by standing up against systemic racism in the NFL, others will join me to ensure that positive change is made for generations to come."

Douglas Wigdor, a lawyer for Flores, told The New York Times that Wigdor Law LLP is looking into allegations from other coaches who could be part of the class-action suit. He noted that Flores reached out to the firm on the same day he received the Belichick text messages.