The Baltimore Ravens filled a void in the middle of their defense, and the Chicago Bears received more help to build for the future.

On Monday, the Ravens acquired the NFL's leading tackler in Roquan Smith, a source confirmed. A source told ESPN's Adam Schefter the Ravens are sending the Bears a second- and a fifth-round pick in 2023 for Smith, a two-time All-Pro inside linebacker. As part of the trade, the Ravens sent linebacker A.J. Klein to Chicago, and the Bears are picking up $4.833 million of Smith's $5.408 million for the rest of the season, a source told Schefter. 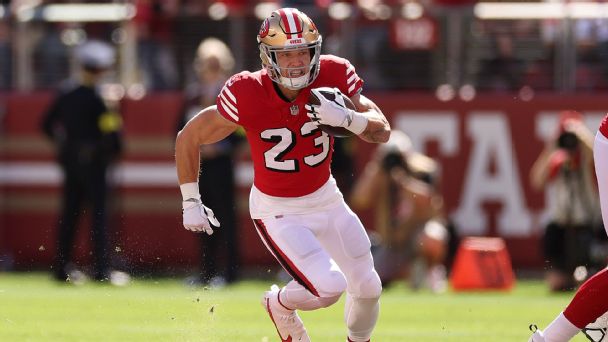 The NFL trade deadline is Tuesday at 4 p.m. ET, and the Bears have been busy after also trading defensive end Robert Quinn to the Philadelphia Eagles on Wednesday. How will the moves impact the rebuilding franchise? And does Smith mean the Ravens are all-in on contending for a title?

Why did the Ravens make the deal?

Smith provides the Ravens with the best playmaking and leadership force in the middle since Ray Lewis. He is one of two players with at least 500 tackles and 15 sacks over the past five seasons (Shaquille Leonard is the other). The center of the defense has been Baltimore's biggest void -- and it has been that way since C.J. Mosley left after the 2018 season -- which is why the Ravens tried to sign Bobby Wagner in free agency last March. Josh Bynes, who has started in the middle for the past two seasons, has been banged up this season and has shown signs of slowing down, especially in the passing game. The Ravens have allowed the third-most yards after the catch (784) on passes thrown fewer than 5 yards downfield. -- Hensley

Does this mean the Ravens are all-in to win a championship?

Not exactly, unless Ravens general manager Eric DeCosta is trading for a wide receiver before Tuesday's NFL trade deadline, too. This trade, however, does represent a big step toward capturing Baltimore's first championship in a decade.

There's no question the Ravens' defense is talented. Baltimore has 10 defenders who were drafted in the first or second round. But the reason the Ravens are 5-3 and not 8-0 is because their defense suffered three fourth-quarter meltdowns.

Baltimore desperately needed a young emotional leader like Smith, who can step up and make plays at the most critical times. This is the third trade deadline deal for DeCosta. He hit on cornerback Marcus Peters in 2019 and missed on pass-rusher Yannick Ngakoue in 2020. Smith looks like a steal for a second- and fifth-round pick, and the Ravens wouldn't have made this deal unless they were extremely confident they would sign him to an extension (and not acquire him as a three-month rental). -- Hensley

Why did the Bears make the deal?

The Bears are rebuilding, and it's clear first-year general manager Ryan Poles isn't afraid to pull off moves that require sacrificing the short term. Poles sent veteran defensive end Robert Quinn to the Philadelphia Eagles on Wednesday, and he dealt Smith to the Ravens five days later.

After failing to come to an agreement on a contract extension this offseason, which led Smith to publicly demand a trade on Aug. 9, the linebacker ended his hold-in and bet on himself by playing out his $9.7 million fifth-year option. He was off to a great start, too, leading the NFL with 83 tackles while notching 2.5 sacks and two interceptions in eight games.

As Smith's stock continued to rise, so did the possibility of Chicago using the franchise tag on the linebacker in the offseason, which might have caused further issues between the player and front office. The two sides weren't close on a number this summer, and it's difficult to imagine the Bears would want to fork over $20 million per year for Smith to reset the off-ball linebacker market when their focus is clearly geared toward building on offense. Since the day he was hired, Poles has been adamant in his belief of building through the draft. Chicago now has nine draft picks to make that happen in 2023, including additional second-round and fourth-round picks (two each) thanks to the Quinn and Smith trades. -- Cronin

What does this mean for the Bears' defense?

Poles and Bears head coach Matt Eberflus have been in lockstep since the two were hired in January. Moving Quinn and Smith doesn't happen unless Eberflus gives his blessing, even if it means the Bears' defense takes a step back in the short term.

But let's be clear about something. The Bears gave up 49 points in Dallas on Sunday with Smith. That's something to keep in mind now that two of Chicago's top veteran defenders are gone. The talent gap on the Bears' defense isn't going to be fixed in a season, but the next nine games will give Chicago an opportunity to evaluate young defenders stepping into new roles, beginning with rookie linebackers Sterling Weatherford and Jack Sanborn.

With all the picks they've compiled and over $120 million in cap space in 2023, the Bears have plenty of resources to begin closing the gap, which on defense begins with finding pass-rushers. -- Cronin

How does Smith fit into the Ravens' defense?

With the physical traits to play all three downs, the Ravens are a great fit for Smith's strengths. Smith can be deployed as a versatile defender in coordinator Mike Macdonald's system, plugging holes in the run game. Look for him to rack up tackles, match and carry in coverage and add to the front in Baltimore's pressure schemes. (He has 16.5 career sacks.) Smith has the pursuit speed and disruptive ability to create impact plays as a stack 'backer in Baltimore. The Ravens have allowed opponents to pick up first downs on 27.4% of their rushes, which ranks 26th in the league. They'll be better with Smith on the field. -- Bowen

Smith is a free agent after the season. What could his next contract look like?

The top of the linebacker market is around $20 million, which really explains why Smith was traded in the first place. Chicago was believed to be well below that when both sides negotiated over the summer. So, Smith will be looking to replace Indy's Shaquille Leonard ($98.5 million over five years) as the highest-paid off-ball linebacker. Baltimore must decide whether it is willing to meet that demand, franchise-tag him at $18-plus million or let him walk for a compensatory pick. Smith will be one of the most coveted players on the market and should command top dollar. -- Fowler

What are the Bears' biggest draft needs right now?

With their first-round selection likely near the top of the board (projected to be No. 8 by ESPN's Football Power Index), and now two picks in the second round, the Bears have to focus early in the 2023 draft on addressing the left tackle position. Rookie Braxton Jones has been decent, as his pass block win rate (89.7%) is second among rookie tackles, but he has allowed nine sacks this season -- second most behind only Indianapolis' Matt Pryor (10). He isn't the long-term answer. Ohio State's Paris Johnson Jr. fits what the team needs and could be in play on Day 1 for Chicago.

In Round 2, look for the Bears to add a potential starter at wide receiver while searching for Smith's replacement at linebacker. If he falls out of the first round after a down season, LSU receiver Kayshon Boutte would be perfect as a bigger pass-catcher to pair with Darnell Mooney. -- Miller