For more from the 2016 Body Issue, check out espn.com/bodyissue! And pick up a copy on newsstands starting July 8.

Antonio Brown is not an easy man to track down -- on the field or off it. Between "Dancing With the Stars" rehearsals, offseason workouts and more FaceTiming and Snapchatting than you can imagine, the four-time Pro Bowler sat down with ESPN's Morty Ain on the set of the Body Issue to discuss his training regimen, his candy habit and the beauty of "mango season." 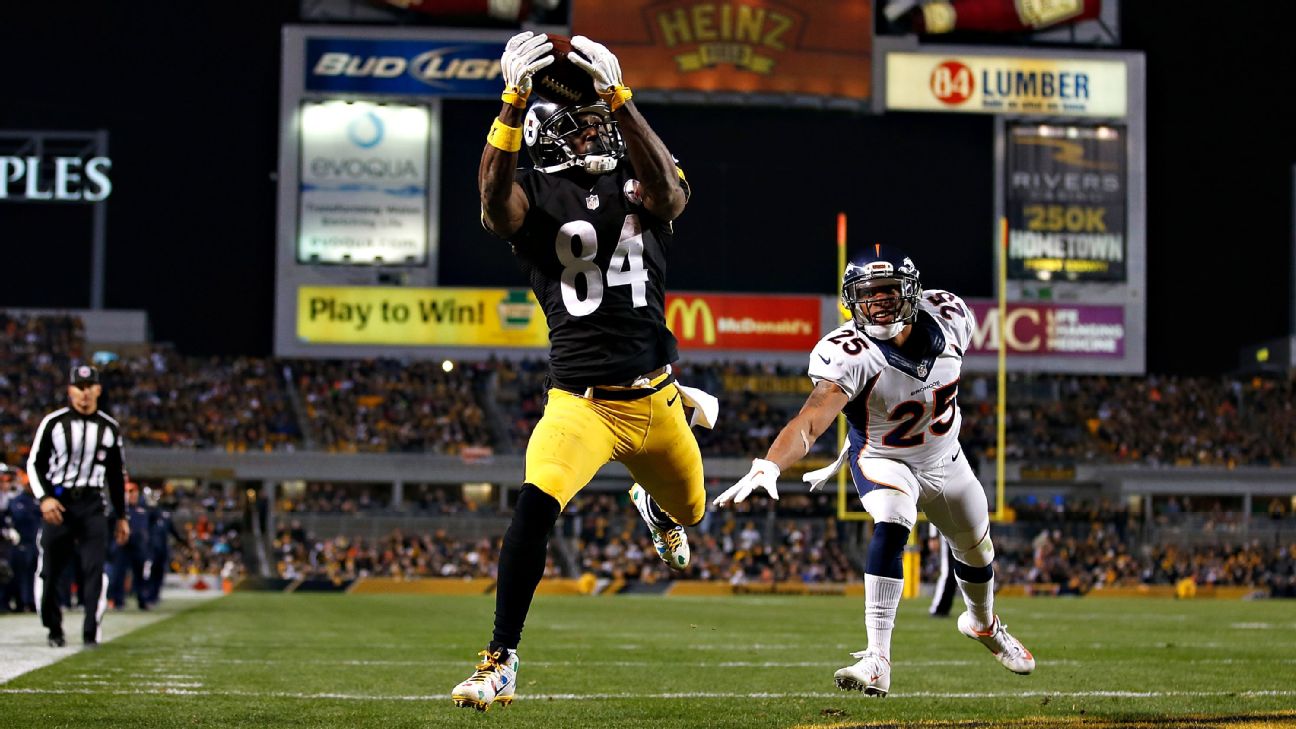 ON CHANGING THE PERCEPTION OF SMALL RECEIVERS
Being passed up by teams because of my size made me hungry. I've seen a lot of first-round guys who come in and never really do nothing because they may not appreciate the opportunity because everything has been given to them. I think guys who come from the bottom understand how hard it is, so they appreciate the opportunities more.

I don't think of myself as a small receiver, but you can't control what somebody says about you. It hasn't held me back -- actually, I think I've changed the perception of smaller receivers. My being able to do what I do at my size, being able to create opportunities for other guys ... I used to play with Bruce Arians [in Pittsburgh, when he was offensive coordinator], who is now head coach for Arizona, and he went on to draft T.Y. Hilton in the third round [as the Colts' OC]. He drafted John Brown, who starts for the Cardinals, in the third round. So I think guys like myself have been able to create opportunities for these guys who may be my size.

ON HIS BODY EVOLUTION (AND MANGO SEASON)
I was real skinny in high school. I was real fast and explosive. I just didn't really have a good nutrition plan, I didn't understand how important it was to be healthy. I was eating hot fries, potato chips in the morning, Capri Sun. That was like my breakfast. That changed when I got to college -- I put on 20 pounds of muscle. Now I like everything about my body. My calves are developing and getting strong -- it's definitely mango season. Mangoes have a nice, strong shape when they're growing on the trees around this time, when they start plumping -- just like my calves. Also, I've got a lot of kids, so my sperm count is good. 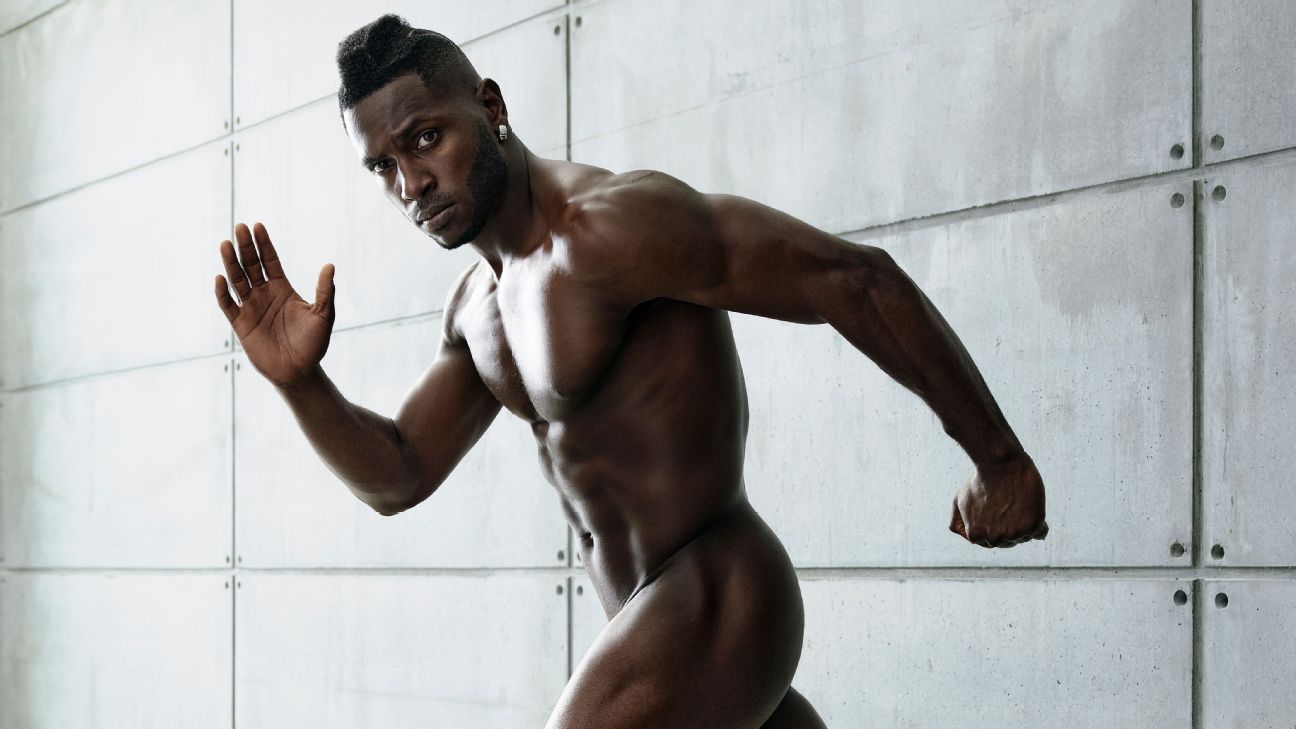 To go behind the scenes at Antonio Brown's Body Issue shoot, check out the full gallery of his photos. More »

ON SURVIVING TRAINING CAMP
When I was a rookie in training camp, I'd have two-a-days and I was like, "Damn, I'm about to die." I came up with a quote: "The first day of training camp, I thought I was going to die. The second day, I was afraid because I didn't die. And the third day it was like I couldn't die." Life is a fight. You've got good and evil forces constantly battling each other, and if you want to set out to do something positive, there's going to be distractions, there's going to be adversity, there's going to be some things that are going to hit you in life, and you've got to fight the good fight in regards to staying true to your goals and staying on that path of what you want.

ON HOW "DANCING WITH THE STARS" WILL HELP HIM ON THE FIELD
I've been doing a lot of dancing, and each dance has its own footwork that can be compared to football. The karaoke movement can be used with lateral movement; the quick step is great when taking off on the line. Dancing helps with the changing of directions, transferring of weight with your shock absorbers, which makes your ankles a lot stronger. As a dancer, you've got to be able to point your feet and bend your knees and push through your knees. I'll maybe add a couple dances for some extra cardio or for stretching or feet strengthening.

ON HIS SLEEP SCHEDULE
During the season, sleep is definitely important, which is why I got a nice spot closer to the facility so I can get more rest. With training and working out, you need to get more sleep and recovery so your muscles can do what you want them to do. During the season, I try to get the most sleep that I can get. But in the offseason, I only get four or five hours -- it's hard to sleep when you're having a lot of fun.

ON TAKING CARE OF HIS BODY
Nutrition is important, training is important -- but so are rest and recovery, massages, acupuncture. Your body is your temple, and you've got to take care of it. In the NFL, you've got to lift weights. With guys hitting you and all the falling on the ground, you've got to have the muscles to protect the shoulders when you're hitting the ground. But I also do Pilates to work on the deeper core and to stretch. I lift weights in the offseason about four times a week; during the season I'll lift three times a week. The weight training is key because most guys come in during the summertime as strong as they are going to get and they fizzle down as the year starts. I'm 7 percent body fat -- that's all right for right now, but by the time we get to training camp, it should be about 5 percent. I always try to maintain what I bring in, so I'll hire a trainer to make sure that I lift and do the appropriate workouts the whole year.

"I think guys who come from the bottom understand how hard it is, so they appreciate the opportunities more." Antonio Brown

ON HIS STARBURST HABIT
At the end of every year, I always get a blood test to see what's on the inside of my body. You've got to see what you put into your body, not just care about the outside of your body -- make sure you get in all the supplements and all the protein and all the carbs and the low cholesterol. Last year I was able to see that I could have more durability in my muscles if I would take some more amino acids and do some stuff that would help with recovery. It also told me to stay away from the Starbursts -- I was eating too much candy last year.

ON HIS WORKOUT REGIMEN
I like to work out my legs after a game because that speeds up the recovery process and the blood flow. I hit them the next day, not right after. Postgame on Monday will be a big leg day, and I'll make Thursday my single leg day. But Monday is definitely a big legs day because you get the day off and it gives your legs a chance to recover for a long week of practice. I'll do squats, single leg lunges. It just gives you that fresh blood after a hard-fought game.

I also do a lot of swimming during the year. I try to swim once or twice a week. I basically hold my breath for like 12 laps, down and back, to kind of expand my lungs so that I can have better breathing when it comes down to two-minute drives where you've got to play a lot of plays all in one series and you're hurrying up. I want to know that I have the right oxygen that I can be able to maintain.

ON WHAT DROVE HIM TO SUCCEED
Even though I was drafted late [sixth round in 2010], I've just been way hungrier than these guys. I'm smarter and I just outworked them. There's this Muhammad Ali quote: "Champions aren't made in gyms. They are made from something they have deep inside themselves." I'm striving to be the best player I can be. Not just physically, but mentally, spiritually and to give it all I got. If you want to be the best, you can't take the path of least resistance. Every morning you wake up and your mind tells you it's too early, and your body tells you you're a little too sore, but you've got to look deep within yourself and know what you want and what you're striving for.