Have you always been big?

Todd Herremans: I was always pretty pudgy ... probably a little pudgier than what you'd call "baby fat" [laughs]. When I first started playing football in seventh and eighth grade, there was a weight limit, and I always had to wear a "T" on my helmet because I was overweight; it meant I had to play in between the tackles. I couldn't catch the ball even if it was thrown directly to me. I just had to sit in there and take up space, even at that level. I was forced to be a lineman at a young age.

Jack Mewhort: I was always bigger. Going into high school, I think I was like 5-foot-9, 190. Then I hit my growth spurt. That's why when I got this call [to be in the Body Issue], I was like, "They want to see me naked?" I thought I was getting punked.

Anthony Castonzo: I kind of went through waves. When I was in fourth grade, I was playing tackle football with the eighth-graders because of my size. But there are pictures of me in high school where I literally looked like a capital L -- I had such gigantic feet and I was so tall and so skinny that just standing there, I looked like a capital L. Then I gained a bunch of weight after high school. I was a real late developer.

How do you view your size?

Mewhort: I haven't always viewed my size as something that's beneficial. I think every big kid at some point deals with insecurities. I struggled at points, but then you find your niche and you start becoming successful and suddenly you say, "Hey, at this point it's just part of the job description." Football isn't a beauty pageant -- that's another thing that I love about it. Football helped me a lot with my confidence and insecurities, and I'm grateful for that.

Castonzo: I always recognized that I was big. I come from a family of big people. I'm 6-foot-7, I'm the biggest, but my brother is 6-foot-6, my dad is 6-foot-4. In middle school, I used to refuse to play basketball shirtless outside because I was afraid people would see me and I was not happy with my body. Then when I was in high school, I thought, "Oh, I'm too skinny, I need to put more muscle on." It's an ongoing process. ... I don't think a perfect body is attainable. Even giant bodybuilders who are super muscular may not have the flexibility or athleticism that someone who's smaller has.

Physically, how would you compare the three of you?

Mewhort: I think it's very cool because I'm one year in, Anthony is four years in and Todd is 10 years in ... three generations of linemen in the NFL. We all take great care of our bodies, but Anthony is always the guy who wants to be the in-shape lineman. Todd is laid-back but takes very good care of his body, considering he's been 10 years in the league. I try to mimic what they do. Todd has had such longevity, and Anthony has played at such a high level for a long time, so I'm trying to find out what their routines are and what they do to maintain their bodies.

What kind of reactions do you get when you go out in public?

Castonzo: People immediately notice. It's hard to go incognito anywhere as a group. But if we go out, Andrew [Luck], he takes all that [attention], because people don't care about us when we're out with him. It's kind of nice [laughs].

Herremans: People automatically think, "Oh, you have to play a sport because you're a big guy." Well, maybe I'm really into watercolors [laughs]. Maybe I'm a professional pianist or something. Why does the assumption always have to be that I play football? I might kind of look like a mean guy who isn't approachable, but the truth is I'm a big teddy bear. I'm a lover, not a fighter. I use up all my aggression on the field. Part of your job description is to go out there and be aggressive and be tough. But when I step outside the lines, I'm a normal person. Being an offensive lineman is what I do, it's not who I am.

Do you think your body is meant to be 300 pounds, or are you holding extra weight to compete?

Mewhort: I don't think I'm too much above my natural weight. I'm not waking up in the morning and feeling like, "Oh my goodness, why am I carrying all this weight?" I think I'm right around where I'm supposed to be. 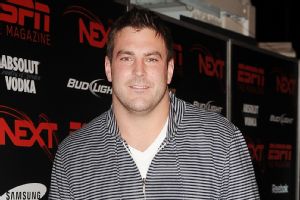 Herremans: I think the view of offensive linemen from the public is that we are all just fat slobs. Which is what it used to be, kind of. But now the game has evolved into more fit, athletic offensive linemen. So I would say that Anthony is probably the leanest out of all of us, and I'm probably the chubbiest. Jack is somewhere in the middle.

Castonzo: Yeah, I'm naturally a pretty skinny guy. My natural weight is probably 250. At 6-foot-7, I've got to plan on eating all day just to maintain my weight. We have to take off from lifting here and there just for recovery, and in my week off I'll lose 10 pounds. That's probably the biggest challenge. I eat a lot, whenever I can.

What's the biggest challenge you face with your body?

Herremans: My biggest nemeses are those TVs that hang down in the aisle in airplanes. I'm cautiously walking and making sure that my feet don't kick anything and my bag stays away from smashing people in the shoulder, and then I'll just walk straight into one of those TVs and get the biggest goose egg on the top of my head.

Mewhort: When you're this big and pale, you're like a giant solar panel. It's overcast today, but I put on SPF 30 just to be sure. I'd like to throw a little bit more of a bronzed tone on myself; I'd throw a tan on there.

What's something about your body that would surprise us?

Herremans: I think if you watch me play basketball, you'd be impressed. I feel like I move well on the basketball court. I'm not restricted to robotic technical movements, which a lot of offensive linemen are. But of course I get relegated to center all the time.

Mewhort: I'm pretty good at yoga, actually. I've been getting into it recently. Anthony got me into it. I did a back bend the other day. I had some assistance from the instructor, but I still thought it was pretty cool.

Castonzo: I have the biggest feet on our team. My left foot is a size 18 and my right is a size 17. I think that actually helps me. My left foot is kind of like my anchor foot. It's gigantic; it's also flat-footed and has more surface area touching the ground, so I guess it helps me there. It's just always been that way. 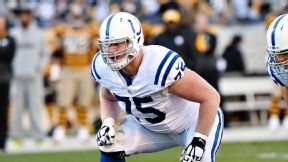 Mewhort: I think people don't realize that there's so much more to us than playing offensive line. If you came and sat with us or went to dinner with us and saw how cultured and well-spoken a lot of these guys are ... we have really well-educated guys who went to school all over the place. People see us on TV and they see us as this kind of brute and don't think there's much to us.

Castonzo: It's good to be good at other things. For instance, I've been teaching myself how to play the piano, which is kind of just an unwinding thing for when I come home from practice. So if you have a bad day, you can come home and do something else and be good at it and stay positive.

Mewhort: Anthony is like the king of facts. I think he studied biochemistry at Boston College. So some of the conversations he has sometimes with [Colts center] Khaled Holmes, who studied the classics at USC ... they'll be talking about their favorite Greek god. It's crazy some of these conversations.

Castonzo: Oh, we get into it. Andrew [Luck] will usually spark the conversation. But we'll get into political arguments. Another big one is extraterrestrial life; we are all fascinated with the cosmos and what's going on in the universe.

Where do you stand?

Castonzo: Oh, 100 percent, there's intelligent life somewhere out there. There is a perfect zone and distance away from a star that gives you a certain temperature for there to be liquid water. If there's liquid water, there could be a different kind of life that we couldn't possibly fathom, because there are other dimensions we couldn't fathom because we don't see them or don't experience them. We are tiny specks of dust floating through a gigantic universe.

This is an online exclusive story from ESPN The Magazine's Body Issue 2015. The Body Issue hits newsstands July 10. Subscribe today!