Editor's note: Wilfork announced his retirement from the NFL on Thursday, and so we're bringing back his Body Issue Q&A from the summer of 2016. Check out the 2017 edition of the Body Issue here.

This is an online exclusive story from ESPN The Magazine's Body Issue 2016. Subscribe today!

If you watched HBO's "Hard Knocks" last year -- or, really, if you've watched any football at all the past 12 seasons -- you're probably familiar with veteran tackle Vince Wilfork, as well as his wife, Bianca, who's never far from his side. The two-time Super Bowl champ sat down with the Body Issue's Morty Ain -- and Bianca -- to talk about body image, "runner calves" and schooling Randy Moss on routes.

Morty Ain: Why did you decide to pose for the Body Issue?

Vince Wilfork: I just think it's a good idea for people that are bigger-boned. If people can look at me, a guy that's 325-plus, doing an issue like this, I'm pretty sure that they might have a little confidence. There will be critics, just like with everything else. I think a lot of people will get a laugh out of it, I'll tell you that. I'm looking forward to what the locker room's going to say. But at the end of the day, I'm perfectly fine with who I am as a person and what I have accomplished. It shows a lot of my personality.

MA: So what do you hope that these photos show about your body? 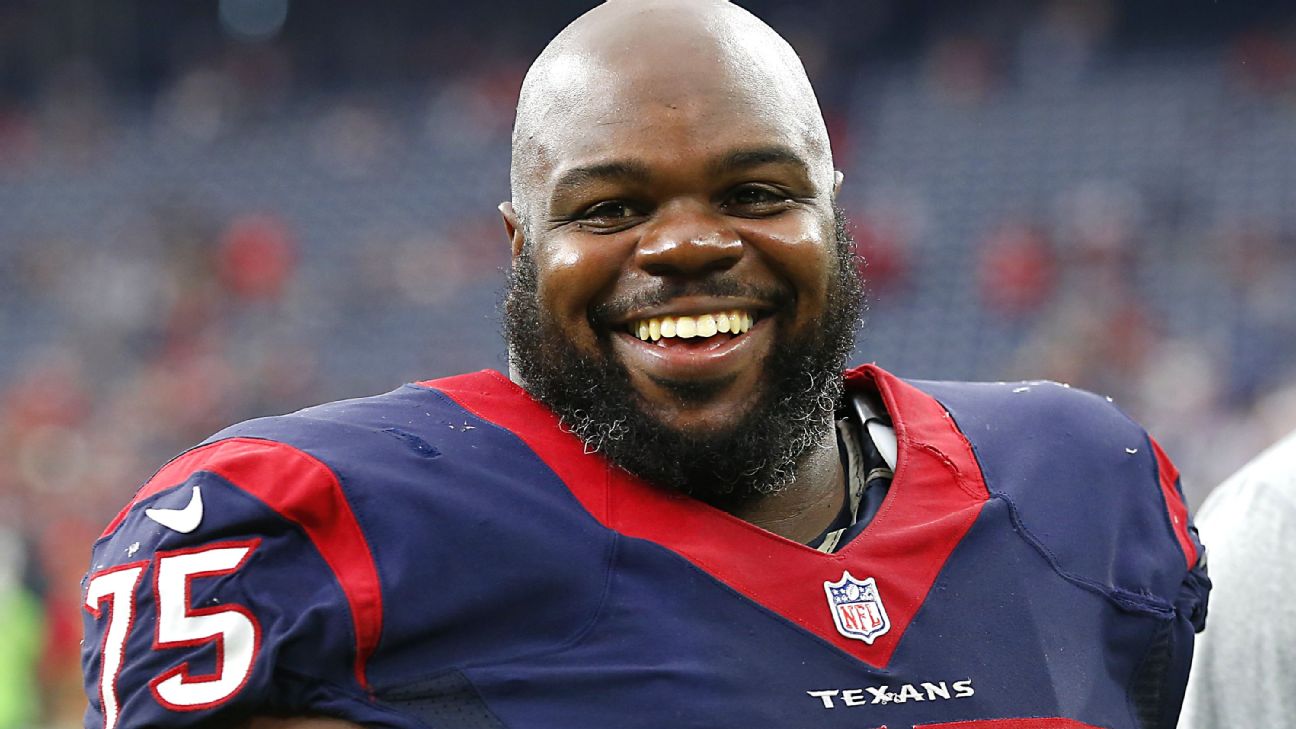 VW: A lot of people look at me as a big person. Some people consider me to be obese. Some people consider me fat and sloppy. But I think this shoot will give people a different look at what I am. Everybody knows that I have a big stomach, but I think sometimes that overshadows everything else on my body -- from my calves to my back to my shoulders to my biceps, you name it. What people go to the gym and work for, I have. The only thing I don't have that they got is six-packs. But I really don't care about six-packs.

Bianca Wilfork: And let's not forget that in the football world, you're considered old as well. Old and maybe washed-up by some standards.

VW: Yep. The one thing about me is, I don't care what people think. It all starts with yourself. I believe in myself. I love myself. So it's kind of like, they can shove it up their you-know-whats.

MA: How is the Vince on the football field different from the Vince off it?

VW: A lot of people tell me that off the field I'm more of a loving person.

VW: I love to have fun. I do my own shopping. I do my own yardwork. I like to garden. I like to fish. I like to golf. I'm an outdoorsman. I like to cook. But when I hit the stadium, I click the switch, because I know I'm there for a job. I get in a whole different mindset when I enter the stadium. But once I leave I'm back to being a father, husband, a friend. 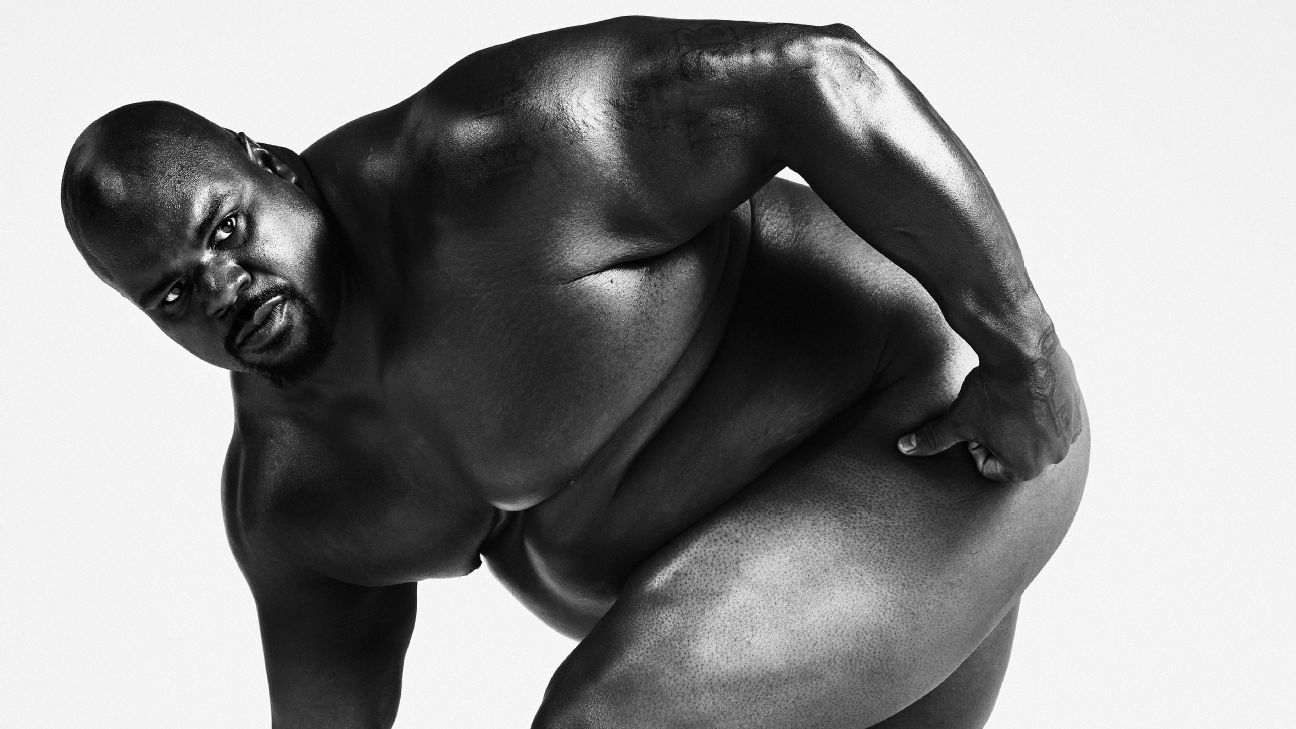 To go behind the scenes at Vince Wilfork's Body Issue shoot, check out the full gallery of his photos. More »

MA: What's it like to be someone your size in everyday life?

VW: People who don't know me, when they see me they kind of step back and just stare at me and say, "Dang, he's a big dude."

BW: Good thing you are an athlete, because if not, then they would just be looking at you for your size [laughs].

VW: True fans and guys who follow the sport, they know who I am. But sometimes I do get those people that look at me and kind of stop and just stare at me, which I hate.

BW: And then they'll say, "Do you play ball?" and he'll tell them no, he's a gynecologist.

BW: I think one of the worst is when people come up to you and they say, "Man, you're bigger in person." Like, is that supposed to be a compliment? We're like, what, am I supposed to say thank you? What the hell?

MA: Bianca, you mentioned that you never see guys Vince's size in the commercials for Under Armour or anything like that. How do you feel about that?

BW: It pisses me off because I know that there's not a lot of marketing advantages for him when it comes to certain outlets. You don't see Vince Wilfork-sized guys on the Nike commercials or Under Armour. But yet you have somebody that's going on 13 years in the league, four times to the Super Bowl, a great guy on and off the field. You couldn't ask for a better fit ... he's just got a big tummy. I feel like it's almost discriminatory.

VW: I don't give a s--- about that. In general, when you're marketing stuff, you want to have a certain look. But I always thought it would be awesome if you had more offensive and defensive linemen with Nike brands or whatever brand it may be. You can't play football without offensive and defensive linemen. But everything you see is always geared toward skilled positions. It's unfair for big guys, because it's harder for us to get noticed because we do the dirty work. We don't catch the touchdowns. We don't throw the passes. But at the end of the day, any football coach or any football player will tell you everything starts up front. If you don't have guys up there doing what they have to do, nothing will work.

MA: Is your size a product of the job? How much of it is natural?

VW: Some of it is born a certain way, and some of it is because of what I play. At the end of football, do I want to be this big? No. I don't need to be that big anymore. But for what I do, I've been this way for 13 years and it never stopped me from playing the game at a certain level. It never stopped me from being a Pro Bowler. It never stopped me from being in Super Bowls. I missed one season, and basically I had major one injury in my career in 12 seasons. As a nose tackle or as a D-lineman, that's kind of unheard of. So people can sit and say I'm too big or obese or whatever; well, look at the facts. Look at my career and look at my history. You see the durability and the level I played at.

MA: So you're naturally this size?

VW: I'm naturally a big dude, yes. I was 308 in high school. And I've been between 308 all the way to 350. I can only imagine when I finish football and I get the weight off, I'll probably feel things different. But for 20 years I've been this size; basically it's the only thing I know.

MA: Is there a particular part of your body that you're most proud of?

VW: I love my calves. In high school someone told me, "You got runner legs." And I say, what the hell does that mean? He's like, well, your calves; you don't have fat-people calves [laughs]. So to this day, I'll be talking about myself in the meeting room and I'll say, "Man, look at that dude's calves." And everybody laughs at me, but I have some good-looking calves.

"I don't care what people think. I love myself. So, they can shove it up their you-know-whats." Vince Wilfork

VW: I clocked a 4.8 in the 40. At over 300 pounds. But, hell, I haven't run a 40 for a long time [laughs]. Ever since the combine. I don't do that anymore. But all my life I've played different sports. Basketball was another sport that I played a lot. I did the shot put. And in football, I was never a lineman when we played pickup games. I was always a quarterback or a receiver or a running back.

MA: Is it true that you used to play one-on-one against Randy Moss in practice?

VW: Oh, absolutely. Randy taught me how to be a great receiver. He's a good friend of mine.

MA: So you would guard him on routes?

VW: No, I would always be the receiver and he would be a DB. I liked to run a jerk route. Oh, man, I would love it. To this day, any receiver that runs that route, I love it because it's kind of unguardable. That was my go-to. We had a lot of fun.

MA: So if we asked him, he would freely admit that you were taking him to school?

VW: I know him like he's my own blood, and he would never admit that. I mean, he never admitted it when I did it, so you think he would admit it now? Heck no.

MA: What is your favorite thing that you do to train?

VW: Swimming is probably my main conditioning. It gives you a full-body workout. It builds endurance, builds your lungs strong, I mean you name it. And I like that the older you get, you try to find different ways to train besides just pounding and running every day.

BW: We have property in Florida, and he made his own sandpit out there. And we have orange groves, so he would run between the orange groves. And then go on a tractor with full cowboy gear on and move hay around the property and stuff in the sun just to get a good sweat in.

VW: Yes, I've done that. In my career I've done a lot of things. I've tried to push a car. That did not last long, trust me. I was like, you know, with me it's got to make sense in my head. And I'm sitting there saying, "Why the hell am I pushing a car?" Like, "Can I do something else?"

MA: What is something about your body that might surprise us?

VW: I used to be able to dunk, but it's been a long time. I haven't even tried to attempt it ever since I tore my Achilles [in 2013]. The first time, I got a fast break and I said, "Well, it's me and the rim. Either I dunk it or I'm a strike, one or the other." And I ended up dunking it. And that was seventh grade. The neighborhood kids went insane.

VW: I used to do flips at 300 pounds. And I actually thought about starting back doing it and getting to the point where I can do it again [laughs]. But I haven't started that quest yet. I might start this year just to show the world what type of athlete I am.

MA: I'm curious to see what one of these flips looks like. Is it like a double handspring?

VW: [Laughs] I'm going to backflip it if I ever get to do it.