In February, Von Miller led the Denver Broncos to a Super Bowl victory against the Carolina Panthers. Where did he head next? To the set of the Body Issue, of course. Sometime between nabbing MVP honors and appearing on "Dancing With the Stars," the defensive standout sat down with ESPN's Morty Ain to talk about training for the big game, overcoming asthma and being a nerd at heart. 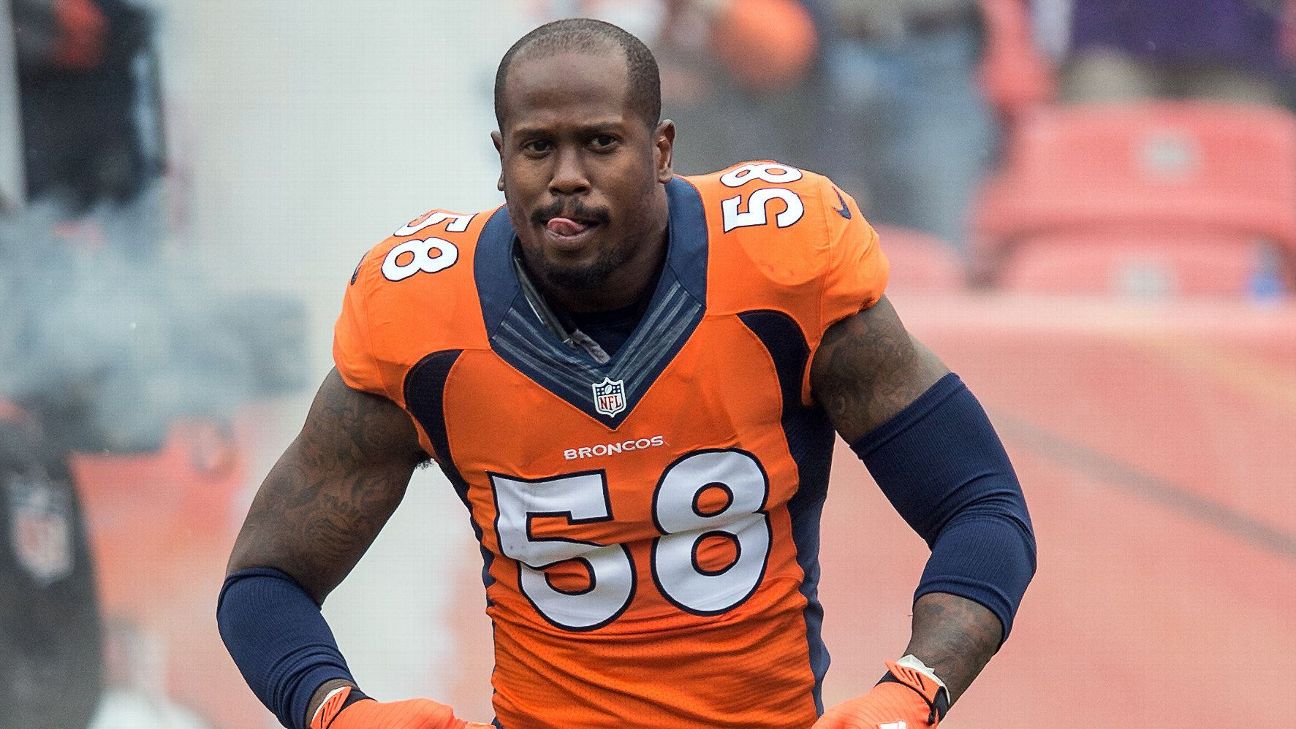 Our Super Bowl win was a team effort. You've got to have a special esprit de corps to be able to get that done. Last year we felt like we had a chance, but this year the energy was just different. It was our second year with everybody -- T.J. [Ward], Aqib [Talib], DeMarcus [Ware] -- and we just jelled a lot more. We were able to create that consistency, and that's what enabled us to propel ourselves to the top.

I went to the movies and had some mozzarella sticks. I try to eliminate all junk food, and it just tore me up the first week of the playoffs. You can't put unleaded regular in a Ferrari; you've got to put in that premium stuff.

I've had asthma my whole life. My mom used to hook the generator up to the Suburban and roll the extension cord all the way down to the football field and have my nebulizer hooked up to that so I could take treatments in between offense and defense. I was in the fifth grade when she started doing that. I grew out of that when I got to the NFL, but sometimes I still have to take treatments before the game, and being in Denver with the altitude is definitely tough. I still keep my inhaler with me right now. 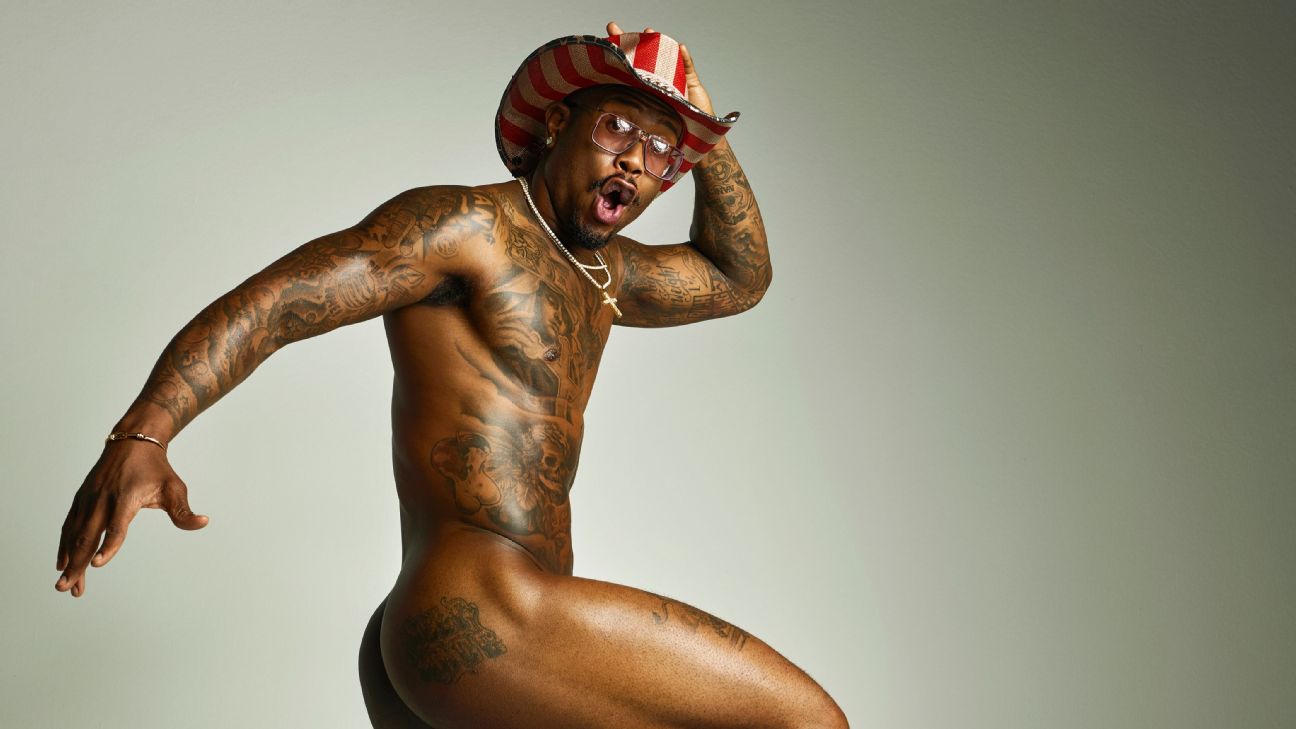 To go behind the scenes at Von Miller's Body Issue shoot, check out the full gallery of his photos. More »

And check out the Super Bowl MVP from every angle in a special presentation. 360 degrees of Miller »

Oh man, tearing my ACL in 2013 was one of the toughest parts of my football career. I was coming off a six-game suspension too [for violating the league's substance abuse policy], and there was a whole lot of doubt and uncertainty. For the most part, it was just me and my mom in Pensacola, Florida -- I couldn't drive, so she would take me to rehab, she'd bring me back home, feed me. And it was just me and her everyday. It was at that moment where I was like, "I'm never going to be back here." There's nothing worse than looking at an article and seeing: "Von Miller tore his ACL, plus he's coming off suspension. And when he played this year he wasn't looking the same he did as the year before. Is he ever going to be able to be the same?" I'm 24 years old and people think my best years are past me! [laughs] It was definitely a tough, trying time.

But the ACL injury was probably the best thing that ever happened to me. It helped me create a work ethic and really understand consistency. When you tear your ACL, you can't take no days off. Not one day. You can't take off icing your knee after, or rehab, or anything -- you've got to be on top of that stuff to even become close to the type of player that you were before.

I really don't look at myself as a defensive end or a linebacker or a cornerback or a safety. I don't try to limit myself to just rushing the passer or dropping back in coverage or being a run-stopper; I try to be great at football. I can't even put a name on what I do -- wide receiver, tight end, running back, whatever -- just put me in the game. I feel like that's the type of teammate that I want to be. I try to be an all-around defender.

Even though I'm a defensive player, I throw 100 balls every day and catch 100 balls. I'm trying to go through the whole motion like Peyton Manning does. I try to be great at everything. I try to show them that I can run, I can pass, I try to get out there early and do all that stuff. I like to show the coaches that I can play offense and defense. But our offense, we've got a team full of killers over there ... but if they need me, I'm ready to go!

I think about it in the National Football League, why guys don't play two positions? I figure if J.J. Watt played quarterback -- if he was able to throw the ball like Ben Roethlisberger, which I've seen him do -- and then if he were able to go over and play defense full time, you'd have to pay J.J. Watt $220 million. [laughs] I think if guys were in the physical shape to be able to play more positions and be able to be elite in multiple positions, then that would elevate the sport of football. I think it would be that much better to have these guys who just don't come off the field, kind of like basketball. That's why I try to stay in shape, I try to eat right, just in case the game takes that left turn and goes that way, I'll be ready to play whatever.

I can't just go to a gym by myself. I can't say "I'm going to do this and do that." I would do a couple reps and then just leave. I need to be pushed.

"Every single day, every play, knowing that people are depending on me to make my play -- that helps me elevate my game to another level." Von Miller

I've been a geek my whole life. I had glasses, I had a ducktail, my mom would dress me funny. I was smart, I was good at video games, I read books, I watched the Discovery Channel. I was good at sports, but I was a geek. When everybody said something, I always questioned -- I'd question it and do research on what they were saying. I liked to know facts. As I grew older, that's what set me apart from everybody else.

Growing up, I wanted to be like Lil Wayne. I still get picked on for my glasses. They helped me train my sense of humor. I created a sense of humor at a very early age, and that's what helped me get through all of that stuff. I would have gotten Lasik, but it's bigger than me now -- little kids wearing glasses just because I do it. I make them feel comfortable wearing glasses. I'm comfortable being a geek, so I might as well stay like this.

I plan on getting tattoos on the bottom of my feet. That's like way down the road, but for me to accomplish everything in the tattoo world, that's what I want to do. I want to be able to totally cover up. I probably won't do my face, I promised my mom I would never do that. And obviously I can't do it now; I've got an image and all this stuff right now, but that's eventually what I want to be able to do.

I want to get "Andy" from "Toy Story" on the right foot, just like what Woody got. As I grew older, I just fell in love with myself. Not like no Terrell Owens -- you know, like, "I love me some me" -- but I try to be the best teammate I can possibly be. First, you've got to understand yourself and what you can be capable of. I understood that at a very early age.

Obviously, the chicken had to come first. A chicken had to lay the egg, right? So there probably was a chicken first that laid live hens, but over time it was safer for the hens to hatch ... this is my idea, I don't know, I'm just thinking.