Sometimes football just seems unfair. Right in the middle of the NFL's golden QB era, the league saw fit to crack down on DB physicality. The result has been predictable: QBs are throwing more TDs and fewer picks per game than ever. What in the name of Vince Lombardi is a coach to do?

Increasingly, the answer involves finding top safeties with the skill to cover monster pass-catchers and the strength to crush shifty running backs. "The spread offense has forced the game to evolve so much so quickly," says an NFL scout with multiple Super Bowl rings. "Safeties are more important now than ever." Here's why a team's last line of defense is quickly becoming one of its first priorities.

The rise in passing offenses has coincided with the rise of spread formations (see chart below). Entering Week 11, nearly seven out of 10 passes were being thrown out of formations featuring three or more wide receivers.

But this trend comes with a twist: Offenses are also running out of spread sets more than ever. This season, teams have run the ball 11.2 times per game with three-plus WRs on the field, up from 6.7 times just five years ago. This puts a lot of pressure on the safety, a position that, according to Giants Pro Bowl SS Antrel Rolle, now requires athletes who can "cover like a corner, hit like a linebacker and be as smart as anyone on the field."

Jimmy Graham. Julius Thomas. Antonio Gates. What do these TEs have in common, other than scoring a lot of TDs (28 in 27 collective games through Week 10)? They're all converted basketball players, boasting size-speed combos that create matchup nightmares. As the chart below shows, Graham, Thomas and Gates have led a tight end revolution. So, how do defenses counter? By putting their best athletes at safety.

Eric Weddle, a 2007 combine standout, played all over Utah's defensive backfield but has thrived at safety for the Chargers. This season, he's one of only two players Pro Football Focus grades as a top-11 safety against the run and the pass (the Vikings' Harrison Smith is the other).

More and more, D-coordinators are employing "big nickel," which features three safeties, to counter athletic tight ends -- a scheme famously used by the 2011 Giants en route to a Super Bowl title. The 8-1 Cardinals are following suit, playing the safety trio of Rashad Johnson, Deone Bucannon and Tyrann Mathieu together. Johnson and Mathieu are fleet enough to hold up in coverage against slot receivers and tight ends, and, because a corner is often swapped out for 6-foot-1, 208-pound Bucannon, the Cardinals have no problem holding up versus the run.

The 15 highest-paid safeties now average a $7 million cap hit, which is a 165 percent increase from 2000. That's far greater than the 115 percent spike in the salary cap over that same span (see chart below).

NFL teams aren't just chasing free agents; they're looking for young, cheap defensive backs who can make an immediate impact at a fraction of a veteran's cost. That's why a record-tying four safeties were taken in the first round of the 2014 draft, and cumulatively the past three drafts have seen nine safeties selected with premium picks, compared with just four the previous three years (see chart below).

The rise isn't all need-based, either. Former All-Pro safety Brian Dawkins believes the talent is better than ever because young players opt to play DB over a diminishing position such as running back.

Recruiting analyst Tom Luginbill cautions that high school stars have yet to fully grasp the economic value of making that switch, but he says college coaches are keenly aware of what to do with their most versatile athletes. "College coaches take the best players and put them on defense when possible," Luginbill says. "At the college level, there is so much strain on safeties because you are so spread out, so the more agile you are in pass coverage, the more value you have."

If there's a team that's a microcosm of the safety's newfound prominence, it's the Seahawks. According to ESPN Insider Field Yates, Thomas, a free safety, influences Seattle's entire scheme.

Knowing Thomas doesn't get beat deep often (see first chart below), the Seahawks can jam wide receivers at the line and devote fellow safety Kam Chancellor to run support. The result? Seattle's defense ranked first in the NFL with 3.2 yards per carry allowed through Week 10 -- and ranks first since 2012 with 6.7 yards per pass attempt allowed down the seam (see second chart below). More and more, a safety-first philosophy looks like a winning approach. 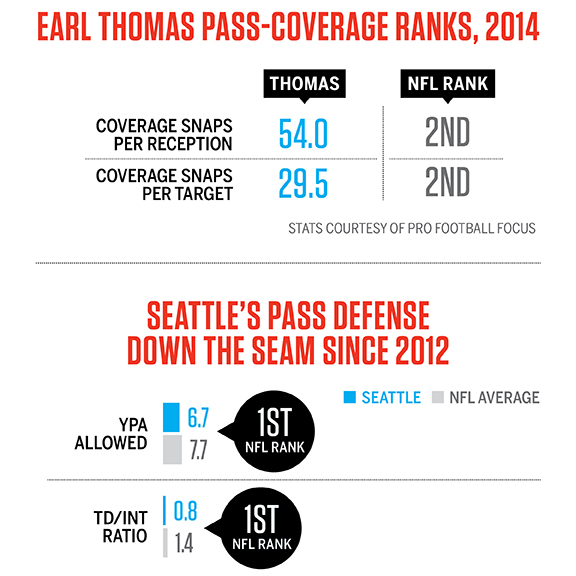 Unless otherwise noted, all stats are courtesy of ESPN Stats & Information