With training camps about to open, here's what to watch for in the AFC. 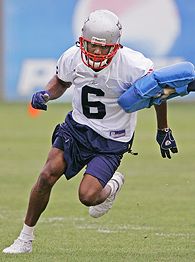 New England Patriots -- Tom Brady can throw deep to Randy Moss and Donte' Stallworth, opening up options that clearly weren't available last season. Brady appeared frustrated at times last year waiting for an inferior group of receivers to get open. By the end of the season, Troy Brown was the only receiver he could count on, and defenses knew it. Now, Brady can spread the ball around. Moss will catch deep passes and outjump defenders in the end zone. Another key will be how well the shifty Wes Welker opens up things working the middle of the field as a slot receiver.

New York Jets -- From his first practice with the Chicago Bears, Thomas Jones looked like a star. Unlike his days with the Cardinals, Jones was no-nonsense. He took the handoff, made one cut and moved with great speed. The Jets needed a runner like that. Last season, it was a weekly adventure figuring out who was going to be the Jets' lead back for any given game. Now, Jones can give Chad Pennington a dependable running attack and the potential of a 100-yard game on any given Sunday. How he fits into the offense will be the key to the Jets' season.

Miami Dolphins -- Trent Green runs his offense like a point guard. He's a master of distributing the ball quickly. Cam Cameron needed a quarterback who could run his offense. Still, one of the keys to camp is watching the development of John Beck, the controversial second-round choice. Beck is said to have Kurt Warner-type accuracy. Though older than most rookie quarterbacks, the 25-year-old Beck supposedly has the skills and accuracy to excel in the Mike Martz-Norv Turner-Don Coryell system. That should show in the preseason.

Buffalo Bills -- In minicamp, the improvement in the offense was quite visible. J.P. Losman threw so many good, accurate passes that the ball rarely hit the ground. Receivers broke out of their routes with explosiveness and they caught everything in the air. But to win in the NFL you can't be half a team. The key to the Bills' season will be how the defense develops. How do they replace Nate Clements, London Fletcher and Takeo Spikes? The barometer of the season will be how well the Bills stop the run. That was a weakness last year and it figures to be a problem this year. If rookie RB Marshawn Lynch looks unstoppable on the ground in practices, that might be a good sign for the offense, but it's a bad sign for the season because the defense will be in trouble.

Indianapolis Colts -- Last year, the development of rookie halfback Joseph Addai was vital to the Colts' success. This season, Tony Dungy might have to rely on the quick development of two rookies -- wide receiver Anthony Gonzalez and left tackle Tony Ugoh. Gonzalez brings great speed and elusiveness to the slot receiver position. His ability to stretch the field gives him a chance to be even more productive than the departed Brandon Stokley, who caiught 10 TD passes in 2004. Ugoh might rush into the left tackle job if Tarik Glenn follows through on his thoughts of retiring. The addition of Gonzalez is a plus. The development of Ugoh could be the key to the season.

Jacksonville Jaguars -- So how will Jack Del Rio sort out the quarterback position? Byron Leftwich enters camp as the starter, but will Daunte Culpepper sign on and challenge him for playing time? Two years ago, the Jaguars appeared to be settled at quarterback. Leftwich was good enough to take the team into the playoffs. David Garrard was considered one of the better backups in the league. Now, the quarterback position is in turmoil. Leftwich could leave via free agency after the season. 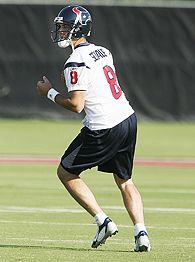 Houston Texans -- As Matt Schaub goes, so go the Texans. That's why the Texans gave up on David Carr. Because of poor offensive line play, Carr always was going down and going down hard. Gary Kubiak likes Schaub because he makes fast decisions and gets rid of the ball quickly. A quick-releasing quarterback is hard to sack and Kubiak believes he can cut sacks down by at least 50 percent. Schaub has to get his timing down in training camp and during the exhibition games. He also has to watch the ground game develop with Ahman Green.

Tennessee Titans -- Vince Young clearly has what it takes to run the Titans' offense. But does he have enough receiving help? Losing Drew Bennett and Bobby Wade didn't help. Young carried the Titans in the second half of last season with his legs and his arm. But he needs to work on his accuracy. It's hard for a team playing a tough schedule to go above .500 with a quarterback completing only 51.5 percent of his passes. But if he doesn't have enough receivers, it's hard for the percentage to improve.

Baltimore Ravens -- It's finally time for Brian Billick to install some of the exciting schemes he used in Minnesota. The Ravens' personnel wasn't really suited for that for so many years. They needed to have Jamal Lewis follow a fullback's lead and pound the football. But Lewis is gone and the addition of Willis McGahee opens a lot of opportunities to put extra receivers into routes. The Ravens are loaded with talented, young receivers to allow the offense to grow. QB Steve McNair has the luxury of using more spread formations.

Cincinnati Bengals -- A year ago, Carson Palmer was coming off his knee surgery and no one was sure what he could do. Palmer vowed at training camp to get stronger and better as the season went on and he exceeded those expectations. This season, Palmer's goal is to complete 70 percent of his passes. Practices at Georgetown College will be filled with excitement as this offense continues to grow.

Pittsburgh Steelers -- The doubleheader to watch in Latrobe, Pa. is how Mike Tomlin coaches the team in place of Bill Cowher and how Ben Roethlisberger grows into his role of running the offense. The players like what they see from Tomlin. He brings fresh energy to the field. Roethlisberger wasn't ready to take on as much of the offense as he wanted last year. A motorcycle accident and an appendectomy forced him to play catch-up during the season, and the result was too many interceptions. This year, Roethlisberger will try more short passes and make all of the calls at the line of scrimmage.

Cleveland Browns -- The "Under Reconstruction" sign still hangs over the Browns' facility. The offense is in transition. Jamal Lewis is taking over at running back. Charlie Frye enters training camp as the starting quarterback, but Derek Anderson could challenge him and eventually everyone is going to be clamoring for Brady Quinn -- if he ever signs a contract. The key for Romeo Crennel is to get the defense together quickly. With three divisional home games in September, the Browns can't afford to be run over by Willie Parker, Rudi Johnson and Willis McGahee.

San Diego Chargers -- This is Norv Turner's third chance at a head coaching job. This is also the most talented team he's ever coached. His roster consists of 11 former Pro Bowlers and a few more set to have Pro Bowl seasons. He takes over an offense that scored 30.8 points a game last season. Not only does he have the best runner in football, LaDainian Tomlinson, but he has perhaps the most talented backup runner, Michael Turner. There hasn't been this much excitement about a Chargers' offense since the Don Coryell days.

Denver Broncos -- Despite a nine-win season, Mike Shanahan did an "Extreme Makeover" with the Broncos' starting units. He traded Jake Plummer and entrenched the strong-armed Jay Cutler as the quarterback of present and future. He brought in halfback Travis Henry to give him a more dependable run game. He hired Jim Bates as defensive coordinator, so expect more man coverage from Champ Bailey and Dre' Bly. For this camp, you might need a program.

Kansas City Chiefs -- The Chiefs are in desperate need of a youth movement, but a team can change only so much in one offseason. The current roster has 17 players 30 or older, including 11 starters. But, this camp features a true quarterback competition. Damon Huard is battling Brodie Croyle for the starting job, and the best man wins. There could be a factor that could change things, though. If Larry Johnson misses training camp because of a contract holdout, it might be hard to start the season with an inexperienced Croyle behind center. Herman Edwards doesn't want to put the franchise's quarterback of the future in a position to fail.

Oakland Raiders -- First-year coach Lane Kiffin brings a new vigor to Raider practices. Assistants run up and down the field to encourage or teach young players. Offensive line drills have more intensity as coaches try to bring out more aggressiveness in the blocking schemes. Still, the treat of camp is the strong arm of JaMarcus Russell. Watching him throw is a thrill in itself.