CANTON, Ohio -- Even though he only completed two passes Sunday night during the Steelers' 20-7 Hall of Fame game victory over the Saints, Ben Roethlisberger gave an interesting preview of coming attractions. 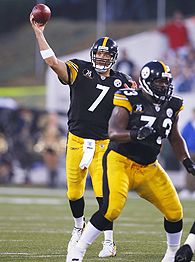 Roethlisberger has been working hard on his short game during the offseason, but he lit up Saints cornerback Mike McKenzie with a long completion down the right sideline. That play was a statement in many ways. The Steelers' plan is to move the ball a little more through the air by spreading the field with receivers. Short passes are expected to work. But the deep ball -- which is a specialty for Roethlisberger -- won't be forgotten.

"The main thing we want to do is be able to stretch the field," Arians said. "We don't want teams to roll up against us on the run. We want to be able to throw deep, but we also want to have a controlled passing game. There is a lot of talent for us on that field."

It will be an interesting transition for the Steelers' offense. Pittsburgh won a Super Bowl two years ago with Ken Whisenhunt as the offensive coordinator, but Roethlisberger was still in his raw years. Last year was a mulligan for the quarterback. He was playing catch-up all season after his summer was ruined by a motorcycle accident and an appendectomy. As a result, his interceptions and mistakes escalated.

Arians wants more out of Roethlisberger, but he wants to get it by using a little less. By using fewer words and simplified verbiage, Arians is making blocking calls and play-calling a little easier.

New head coach Mike Tomlin's staff also has spent a lot of time refining Roethlisberger's footwork. Most quarterbacks can be defined and assertive when making their first two reads. It's the third and fourth reads that are the problem.

"For those third and fourth progressions, it's not even close," Arians said. "He's so much better in looking over the whole field. He's better in the red zone. And he's improved in his checkdown calls against the blitz."

Why is that so important? Roethlisberger will have more direct say in the plays run. Arians will give him more ability to audible out of bad plays if he sees a defense that matches the play called. A part of that command also will involve series run out of the no-huddle.

"We're going to open it up," Roethlisberger said. "I'll be able to have multiple options. I'll be able to change any play if a certain look is out there."

More so than anything else, the Steelers offense is having fun. On his long completion to Cedrick Wilson, Roethlisberger told him he might have trouble throwing the pass.

"I was throwing a new ball with a Hall of Fame logo painted on it," Roethlisberger said. "I told him I'll do the best I can to throw it out there."

John Clayton is a senior writer at ESPN.com.