ATLANTA -- A quarterback depth chart already perilously thin because of the ongoing absence of Michael Vick became even more threadbare when the Atlanta Falcons lost second-year veteran D.J. Shockley for the season to a left knee injury. 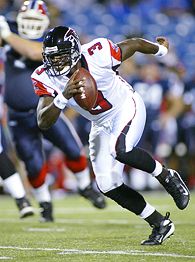 Shockley tore the anterior cruciate ligament in the knee and also suffered damage to the medial collateral ligament in Friday night's preseason victory over the Buffalo Bills, two league sources confirmed. The injury was also reported by the Atlanta Journal-Constitution, and Shockley on Monday confirmed his season is over.

Team officials on Friday night termed the injury a sprain. Shockley underwent an MRI exam on Saturday and the club's medical staff huddled on Sunday to evaluate the procedure. His status was discussed after Monday's practice session.

"It's very disappointing, especially when you get into a situation where you feel like you're doing good, going out there and doing everything possible to help the team. Things were going well," Shockley said, according to The Associated Press, after hobbling into the media room on crutches.

A local favorite because he played at North Clayton High School in suburban College Park, Ga,, and then at the University of Georgia, where he starred as a senior in 2005, Shockley was battling Chris Redman for the No. 2 job behind starter Joey Harrington.

Shockley, 24, was a seventh-round choice in the 2006 draft, but didn't play a snap as a rookie, and he was designated as the team's No. 3 or "emergency" quarterback for all 16 regular-season games. In two preseason games this year, he completed nine of 17 passes for 123 yards, with no touchdown passes and one interception. Shockley also ran four times for 19 yards.

He was injured in the fourth quarter on a scramble on which he gained 10 yards. Shockley escaped the pocket on a third-and-5 play that originated from the Buffalo 24-yard line, ran to his left and turned upfield. But as he went to cut, his foot appeared to stick in the surface at Ralph Wilson Stadium.

The young quarterback went to the ground in obvious pain and was carted from the field.

"I had made that cut probably 40 or 50 times in my life and never thought anything of it," Shockley said, according to AP. "At that particular moment, I felt it as soon as I made the cut. Once I hit the ground, I knew I wasn't getting up. I knew the situation was going to be worse than I ever could have imagined."

Shockley unofficially logged 30 snaps in the two preseason games. Although the coaching staff had yet to determine who would serve as the primary backup to Harrington, Redman appeared to have an edge in the competition. He has played 59 snaps, in part because he was forced to re-enter the game on Friday following Shockley's injury.

The only other quarterback on the roster is Casey Bramlet, who was signed last week after the Washington Redskins released him. Bramlet, 26, starred in the final season of the NFL Europa league this spring and led his team to the championship, but the former Wyoming standout has yet to play in a regular-season NFL game.

"The personnel department is trying to evaluate what might come available and what might not become available," Falcons coach Bobby Petrino said Monday. "There's really nothing out there right now to make any moves."

Redman, who played for Petrino at Louisville, when the Falcons coach was the offensive coordinator there in 1998, has not taken a snap in a regular-season game since 2003. A former Baltimore Ravens third-round draft choice, his resume includes six starts, but he has spent much of the past three seasons recovering from shoulder problems. One advantage he does have is his familiarity with Petrino's offensive design.

The loss of Shockley could force Atlanta to try to acquire another veteran quarterback, which was a possibility even before the injury. The Journal-Constitution reported that the Falcons had earlier inquired about the availability of Philadelphia backup Kelly Holcomb, who is a long shot to make the Eagles' roster because of a crowded depth chart.

Len Pasquarelli is a senior NFL writer for ESPN.com. Information from The Associated Press was used in this report.