Even though rookie quarterback Brady Quinn has had a solid preseason, Browns general manager Phil Savage said Saturday night that the Notre Dame product likely won't be leading the Cleveland offense in its opener on Sept. 9. 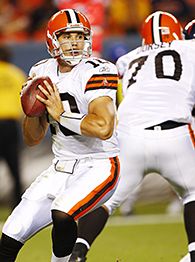 "It's unrealistic for Brady to be in the mix for the opener," Savage told the News-Herald of northeast Ohio after the first quarter of Saturday night's preseason win over the Broncos.


Savage told The Columbus Dispatch on Sunday, however, that while he's not ruling Quinn out, he feels Charlie Frye has proven himself.

"Charlie, if he is indeed the starter, I think he has earned it," Savage told The Columbus Dispatch. "I think he has played well enough to get that right. A lot of people were thinking he wouldn't be able to do it, and he's warded off the challengers and emerged on the other side as what appears to be the winner, at least right now."

With Frye and Derek Anderson believed to be the front-runners to start the season, Quinn has been doing his best this preseason to make that choice difficult for his bosses.


"Ultimately, I think the coach is connected to the quarterback, and he's got to be comfortable with who's out there," Savage told The Columbus Dispatch. "I'm supportive of him in that."

Quinn was efficient and effective for the second straight preseason game Saturday night. He completed 7-of-11 passes for 81 yards and one touchdown.

After missing 11 days in a contract holdout, Quinn is a combined 20-of-31 for 236 yards with three TDs and no interceptions over two games, albeit mostly against backups.

Crennel has said he might not name a starting quarterback until the week before the opener vs. Pittsburgh.


Against the Broncos, Quinn threw a pass in the left flat that Joshua Cribbs turned into a nifty 20-yard touchdown to break a 10-10 tie in the third quarter, but the rookie was robbed of another apparent TD toss on Cleveland's previous possession.


Although Joe Jurevicius hauled in Quinn's perfectly thrown 39-yard pass over Dre' Bly in the end zone, the nearest official ruled he didn't get both feet down before going out of bounds -- replays showed otherwise, but Crennel didn't challenge the call.

"That's a call that maybe if it's the regular season we challenge it," Jurevicius said. "I'm not too worried about it. I think Brady made a great decision coming outside [the receiver's left shoulder] and doing something that was out of the ordinary."

Although "I thought the ball was pretty much on time where it was supposed to be, the throw could have been a little better for Joe to make it easier on him," Quinn said.

That came against Denver's frontline defense, too -- although that may not be as impressive as it sounds. Slow to adapt to new boss Jim Bates' scheme, the Broncos' starters have allowed six touchdowns and three field goals in 15 possessions this preseason.