On a frigid Saturday afternoon in January, with what can only be described as "a cold sun" shining brightly on Minnesota, Buck Humphrey needed a place to hold a meeting in Minneapolis. The grandson of former U.S. Vice President Hubert Humphrey, Buck is a local political activist, and wanted to get together with a group of college Democrats.

In true Minnesota style, instead of finding a community center or union hall, the group booked an hour at a small college ice arena in the heart of Minnesota's most populous city. After donning skates and helmets, Buck and the College Dems hammered out their issues via a series of long passes, wrist shots and blocker saves.

Such is life in the State of Hockey, where the sport so perfectly suited to Minnesota's five months of winter seeps into nearly every facet of life.

And to step into the world of hockey in Minnesota is to step into a bit of a Bizarro World, where the highest level of the sport (the NHL) isn't always the biggest, and the hometown hero who brings fans to their feet is sometimes too young to shave.

Until the Minnesota Wild brought the NHL back to town and moved into the gleaming Xcel Energy Center, the long-time record for largest attendance at a hockey game in the state was set at a high school game -- namely Minnesota's legendary state high school hockey tournament. And to illustrate how big high school hockey is in Minnesota, one needs only to go back to the jubilant locker room in Buffalo last spring after the University of Minnesota beat New Hampshire to claim its second consecutive NCAA title.

Golden Gophers freshman forward Gino Guyer came to "the U" (as the locals call it) after a stellar prep career at Greenway High School in tiny Coleraine, Minn., a struggling mining town of barely 1,000 residents, three hours north of the Twin Cities. As a senior, Guyer helped the Raiders reach the state tournament, and came close to bringing a state title home before settling for third place. As his college teammates celebrated being the best in the nation last April, Guyer was asked how winning the NCAA title compared to playing in the state tournament in Minnesota.

"This is amazing, but it's different than high school because there you win with the guys you've known since you were little and who you've played with all your life," he said. "Still, winning this national title is an incredible feeling, and it's almost as good as making it to state." Almost.

Guyer and countless other small-town Minnesota kids come from a world where life revolves around the fortunes of the local high school team, and the college or pro games, while faster and more hyped, are something to watch on TV when the high school team is on the road. In little towns on the Canadian border like Warroad and Roseau (each of which boasts an arena with more seats than the town has residents) the rink is literally the community's focal point.

Walk into Frank's Bar on Main Avenue in Warroad (which boasts three Olympic hockey gold-medal winners among its 1,500 residents), and owner Frank Krahn can tell you, in detail, about the 1969 state championship game. Krahn was a member of Warroad's team, which lost 5-4 in overtime to wealthy suburb Edina before more than 15,000 at Met Center. Ask around the bar, and someone's sure to know whether it was the post or the crossbar that Danny Marvin hit in the second overtime of the 1988 rematch between Warroad and Edina, this time in the state semifinals before a sold-out crowd at the St. Paul Civic Center. (For the record, it was the crossbar, and Edina went on to win that one too.)

In a region where the thermometer routinely fails to register a temp above zero for a month or more at a time, the arena lobby is the social gathering place for the community, where adults sip coffee to warm up between periods. It has been said that many Minnesota clergymen keep their sermons short because so many adults see life in terms of 15-minute periods with a 10-minute break for resurfacing in between.

One of the great failings of the NHL's first try in Minnesota, was that Stars' owner Norm Green could never fathom why college and high school hockey were so often the focal point of the sports world in Minnesota. Those who refuse to suffer fools simply couldn't see the logic in paying $40 or more per ticket (plus parking) to watch mediocre pro games, when at a rink just three blocks away you could see kids locked in the emotion-filled battle of their lives for $3 (and the parking was free).

In contrast, much of the Wild's success is been due to the organization's efforts to embrace and involve all levels of hockey from all parts of the state in their marketing of the NHL. The arena's concourse features a sweater from every high school and college team in the state, and youth hockey players take to the ice between periods of every Wild home game, while updates on the best high school teams in Minnesota are shown during TV timeouts on the arena's video screen.

If there's one complaint the locals have about the Wild, it's that since Richfield native Darby Hendrickson was sent to the minors a month or so ago, there are no Minnesotans on the team's roster. There is more than one quite provincial hockey fan among the state's five million residents. And it's not that they don't like Marian Gaborik or Andrew Brunette, it just that they think that line would click much better with the likes of Jamie Langenbrunner (from Cloquet), Mark Parrish (from Bloomington), Trent Klatt (from Osseo) or Jason Blake (from Moorhead) on the wing.

Much like the proud father of the bride in "My Big Fat Greek Wedding," who claimed that Greek was the root of every word in the English language, some Minnesotans like to trace nearly everything hockey related to roots somewhere within their home state. They shrugged off last spring's playoff loss to Anaheim by pointing out that the Mighty Ducks started as a mythical Minneapolis peewee team in the original Disney movie, which was filmed at hockey rinks and various other sites throughout the Twin Cities.

The All-Star Game will be played two days after the world premiere of another Disney flick that has Minnesotans recounting their native sons' roles in the greatest hockey story in history. "Miracle" recounts the tale of St. Paul native Herb Brooks and his work with Team USA in the 1980 Olympics. Being able to name the hometown of each of the dozen Minnesotans on that gold medal-winning squad isn't part of the history curriculum in the state's public schools, but most Minnesotans can do it from memory anyway. 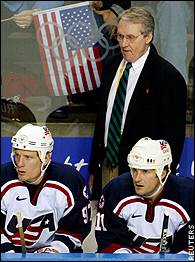 For an event that happened 1,000 miles away, before most of today's collegians were born, the "Miracle on Ice" remains one of the most defining moments in Minnesota hockey history, and Brooks' tragic death last summer seemed to underscore the moment's importance in state lore. While sudden death is never kind, the fact that Brooks was lost so unexpectedly, and just months before the movie's premiere and the induction of his 1980 team into the U.S Hockey Hall of Fame (located in Eveleth, on Minnesota's Iron Range) seemed to be an extraordinarily cruel blow by the hand of fate.

Herbie came from an earlier era of Minnesota hockey, when the ice of the neighborhood's outdoor rink would be in use from dawn until dusk, and kids seemed oblivious to temperatures that close highways and schools in most other parts of the country. The early, pre-artificial ice plant years, the state high school tournaments were dominated by teams from the Iron Range and the Canadian Border, where the longer, colder winters meant an extra month of ice time.

In modern Minnesota, the extra ice time available comes after a wave of arena building in the past decade. The rapid growth of girls' and women's hockey, coupled with the requirement that equal access to sports facilities be granted regardless of gender, meant a severe ice time crunch. The solution was the Mighty Ducks Grant Program, a taxpayer-funded initiative for matching funds to communities which has provided the necessary resources (financial and otherwise) for more than 60 new indoor ice sheets throughout the state. This includes second and third rinks in some large suburban communities, and first arenas in many small towns where basketball had long been the winter sport of choice for lack of an affordable and accessible place to skate.

The other big change that came to Minnesota hockey a decade ago was the splitting of the state high school tournament into two separate events based on school enrollment. For years, Minnesota was renowned for the fact that, like Indiana basketball, all schools in the state, regardless of size, competed for one trophy. In 1994 the first two-class tournament was held, allowing many smaller up-and-coming programs a realistic shot at getting to St. Paul and bringing home a trophy.

Of course, there are those who decry the change even today, saying that the tournament's mystique has been lost. Critics point out that while the large school
games routinely sell out all 18,000 seats at the Xcel, the small school contests usually draw only 8,000-10,000. Again, in the Bizarro World of Minnesota hockey, some consider 10,000 fans for a high school game disappointing.

There are no fears about disappointing crowds for All-Star Weekend, where hockey mad Minnesotans have snapped up every ticket and nearly every piece of All-Star bling available. And when Wild stars Dwayne Roloson and Filip Kuba are introduced, the rafters of the arena are expected to shake.

But the noisiest ovation might come earlier, when the teams for the NHL YoungStars Game are introduced and the announcer calls out the name of New Jersey Devils' rookie defenseman and former Golden Gopher Paul Martin.

And as the noise dies down, at least one fan in attendance is sure to turn to a neighbor and ask, "come to think of it, wouldn't that talented kid from Elk River look good next to Kuba on the Wild blue line?"

Jess Myers covers college and pro hockey for ESPN.com affiliate insidecollegehockey.com and for the Twin Cities bureau of the Associated Press.