How else can I deal with the dilemma of choosing between the NHL All-Star Game and "American Idol" on Wednesday night?!

I thought NHL commissioner Gary Bettman told us he moved the midwinter classic from the weekend to middle-of-the-week primetime so the game would get as much attention as possible. 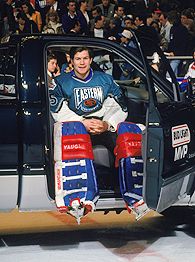 That's not going to happen on a night when Simon Cowell is judging auditions.

OK, maybe not all hockey fans can name the last "American Idol" (Taylor Hicks, even though Chris Daughtry got my vote), but if the commissioner is looking for attention, then why isn't the game on NBC instead of Versus?

A perfect time would have been four days later than the scheduled Jan. 24 date: 8 p.m. ET on the Sunday night between the NFL conference championship games and the Super Bowl. Al Michaels could call the All-Star Game and, you know what, John Madden (no, not the New Jersey Devils center) doing color commentary for one period would be outstanding. Even non-hockey fans would check that out.

I know the diehards will watch, even if the game was on QVC. We're all just glad to have the game back after a two-year hiatus due to the lockout and the Olympics.

It's funny. For a game that doesn't count in the standings, it sure can tap into our emotions at times and give hockey fans some memorable moments. We all have our favorites, and here's my top 10:

10. 1994, 45th NHL All-Star Game, Madison Square Garden
Goalies are not supposed to be named All-Star Game MVPs, but New York Rangers netminder Mike Richter delighted hometown fans as he became the fifth goaltender to do it. He stopped 19 of 21 shots to help the East beat the West, 9-8. Five months later, in the same building, Richter continued to stand on his head as the Rangers won their first Stanley Cup in 54 years. The good karma had to start somewhere.

9. 1968, 21st NHL All-Star Game, Maple Leaf Gardens
We go back in time for a tearjerker. The game took place a day after Minnesota North Stars center Bill Masterton died of severe head injuries after hitting his head on the ice during a game against Oakland. Masterton's tragic passing led to Toronto's Brian Conacher becoming the first player in All-Star history to wear a helmet. Masterton's Maple Leafs edged the NHL All-Stars 4-3. The NHL later named an award after Masterton and it's presented each year to the player who "best exemplifies qualities of perseverance, sportsmanship and dedication to hockey."

8. 1980, 32nd NHL All-Star Game, Joe Louis Arena
It was a magical night in the Motor City. At age 51, Gordie Howe returned to Detroit for his 23rd and final All-Star appearance. If you didn't get goose bumps when he was introduced at The Joe, you're not human. Howe's last All-Star Game was also the first for a 19-year-old named Wayne Gretzky. If you didn't goose bumps when you saw the kid play next to his childhood idol, you're not human.

7. 2003, 53rd NHL All-Star Game, Office Depot Center
Dany Heatley brought the heat on a historic day. He had a hand in all five goals scored by the East (he scored four straight and assisted on the fifth) to win MVP honors. But I will remember this game for what took place at the very end. After a scoreless overtime, fans witnessed the first shootout in NHL competition. It was thrilling as the West won the shootout 3-1. The East's goal was scored by, of course, Heatley. But the shootout sent the message -- two years later, the NHL made it part of regular-season action. 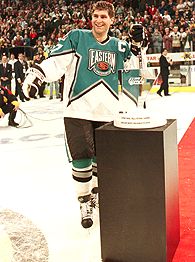 6. 1983, 35th NHL All-Star Game, Nassau Coliseum
It was the first All-Star Game this Long Island girl attended, but it was definitely "Wayne's World." Gretzky exploded for four goals in the third period, leading the Campbell Conference to a crushing 9-3 win over the Wales Conference. All those New York Islanders fans would get their revenge a few months later, when Gretzky and his Edmonton Oilers were swept by the Isles in the Stanley Cup finals as Mike Bossy and Co. pulled off the four-peat.

5. 1989, 40th NHL All-Star Game, Northlands Coliseum
As long as we're in the 1980s and under the Campbell vs. Wales format  I'll never forget this one. Six months after the stunning trade that sent Gretzky from Edmonton to Los Angeles, the All-Star Game took place in (where else?) Edmonton. Oilers fans will remember how they greeted Gretzky when he was introduced to the crowd, but Gretzky will remember how he left the ice that day -- carrying his second All-Star MVP award after posting a goal and two assists in the 9-5 Campbell Conference victory.

4. 1984, 36th NHL All-Star Game, Continental Airlines Arena
Don Maloney still ranks as one of my all-time favorite players, but you don't have to be a Rangers fan to appreciate this unlikely MVP. Before the game, Maloney was asked how he approached his first All-Star Game. He said, "You just go out, try your best, and shoot for the car [the MVP prize]." Keep in mind, the most points Maloney had ever totaled in a season was 73 in 1980. Maloney proceeded to post a goal and three assists, and he drove away with the car after leading the Wales Conference to the 7-6 win over the Campbell Conference.

3. 1988, 39th NHL All-Star Game, St. Louis Arena
Just another day in the office for Super Mario. He not only broke the record for most points in an All-Star Game with his six-point explosion, but he also scored the game winner in overtime. Hat trick. MVP. Wales Conference wins, 6-5. Lemieux totaled an amazing 23 points over 10 All-Star Games, just two points behind all-time leader Gretzky, who played in eight more All-Star contests.

2. 1997, 47th NHL All-Star Game, San Jose Arena
Remember this one, when Owen Nolan called his shot? Gotta love it. Playing before the Sharks faithful, Nolan scored three goals in an 11-7 loss to the East. It was Nolan's last tally that was most memorable. On a third-period breakaway, Nolan closed in on Dominik Hasek and pulled out a Babe Ruth-like gesture by pointing in Hasek's direction. Nolan then fired the puck high glove-side, past Hasek and into the net. After the game, Nolan said he wasn't trying to show up Hasek; he was asking the goalie to give him a break after he missed on two breakaways against "The Dominator" earlier in the period. Whatever the reason, it was classic!

1. 1996, 46th NHL All-Star Game, FleetCenter
You can't make this stuff up! Bruins veteran and fan favorite Ray Bourque broke up a tie game by scoring with just 37.3 seconds left in regulation to lift the Eastern Conference to a 5-4 win over the Western Conference. It was simply a great moment for a good guy, and for it to happen in front of his beloved Bruins fans made it even more special.

Here's hoping next week's tilt in Dallas gives us something else to remember besides the new tighter, lighter, form-fitting jerseys the players will be wearing.

Hooked on hockey, Linda Cohn is an anchor for ESPN, ESPN2 and ESPNEWS. She has been with the network since 1992 and promises a gluttony of glove saves in her weekly column. You can e-mail her at linda.cohn@espn.com.