DALLAS -- New Jersey forward Zach Parise had two goals and four assists to lead the Eastern Conference to a 9-8 victory over the Western Conference in the YoungStars Game on Tuesday night. 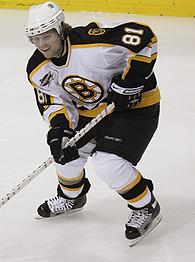 Parise, a first-round pick by the Devils in 2003, was selected the MVP. Boston's Phil Kessel scored his third goal four minutes into the third period, assisted by Pittsburgh's Jordan Staal and Parise to give the East a 9-4 lead.

"It was fun. You could see the skill out there," Parise said. "Then in the last 30 seconds the intensity picked up when we were only a goal ahead."

The West scored the last four goals in the game and had a chance to tie in the final 30 seconds when Jussi Jokinen of the hometown Dallas Stars -- the lowest draft pick in the game, picked 192nd overall in the sixth round in 2001 -- missed from the front of the net.

"I had a lack of focus after we got the big lead," said Atlanta's Kari Lehtonen, the East goalie. "They were scoring a lot, but I was happy to stop Jussi there at the end."

Jokinen had a goal in the first period and then in the second slapped a puck that appeared to go into the net -- but wasn't counted as a goal.

Four of the East goals were scored by defensemen: two by Ottawa's Andrej Meszaros and one each by Pittsburgh's Ryan Whitney and Tampa Bay's Paul Ranger. San Jose defenseman Matt Carle scored two goals for the West.

Anze Kopitar, the Los Angeles Kings' first-round pick in 2005, and Ryan Getzlaf, Anaheim's first-round selection in 2003, had two goals each for the West.

Kopitar scored on the first shot only 27 seconds into the game, and Parise tied it a minute later. Meszaros' first goal with 12 seconds left in the first period made it 3-2, and the East never trailed again.

The game consisted of three 10-minute periods and a mostly running clock.